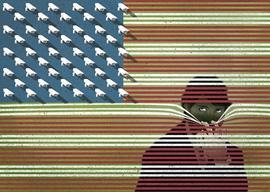 Upon superficial inspection, still-living superstar hacker Julian Assange and long-dead commie-stalker Joseph McCarthy seem like natural-born enemies and political polar opposites. Technically, the Arctic and Antarctica are polar opposites, too, but are they really that different?

Comparing anyone to infamous anti-communist zealot Joseph McCarthy, as he is popularly understood in pop culture, is to accuse them of being a torch-carrying megalomaniac with a sociopathic disregard for the damage wrought by their ruthless, Spanish Inquisition-style paranoid purges, persecutions, pogroms, and perennial pickin” on people. “McCarthyism” is considered a smear because we all must admit it was a shameful moment in American history when some upstart cheesehead Senator dared to suggest the American government was being infiltrated with communist sympathizers. Blot from your minds forever the fact that certain Soviet “cables” decrypted after McCarthy’s death seem to have at least partially vindicated him, and let us never teach in our public schools that communist governments murdered at least a hundred million human beings.

WikiLeaks editor Julian Assange has made it clear he in no way identifies with the alcoholic, hound-jowled, Red-hunting Wisconsin Senator from the 1950s. Last December after Bank of America, MasterCard, and Visa ceased all transactions with WikiLeaks, Assange denounced it as “business McCarthyism.”

Although WikiLeaks gained most of its notoriety by releasing confidential US government documents, this isn”t the first time Assange has targeted private individuals.  Whereas McCarthy’s enemy remained constant, Assange has pursued an array of targets. His specific crusade may change with the seasons, but the crusading doesn”t. Last year he pissed a steamy yellow data stream in the face of “the government.” This year he’s sharpening his lance, mounting his snowy-white horse, and galloping into battle against “the rich.”

And a few years ago, he employed distinctly McCarthyite tactics against “the racists.”

The story never got much play in America because it didn”t involve Americans, but in 2008 Assange authorized the release of a private document purportedly containing the names, home addresses, and in many cases the telephone numbers and email addresses of over 10,000 members of the nativist, anti-immigration British National Party. WikiLeaks released the information in violation of a court injunction. Ironically, as Assange remains in England under house arrest for cellophane-flimsy Swedish sex-crime charges, the British may have a more solid criminal case against him for violating that injunction than the Swedes do for when he fucked those two different chicks and then both girls found out about it.

Even though we”re subliminally and overtly trained to deny it, my twisted pink speckled Irish guts tell me that today’s “racists” play almost the identical social role of a scapegoated, stigmatized, ostracized, universally maligned, and dehumanized ideological outgroup that people accused of being “communists” played in the 1950s.

Assange’s stepfather is quoted on Wikipedia as saying, “He always stood up for the underdog…he was always very angry about people ganging up on other people.” But I can”t picture Assange getting very peeved at what seems like all of England ganging up on BNP leader Nick Griffin on national TV. I can”t picture his nostrils fuming at the sight of his fellow info-pirates gloating about how the leaked membership list will allow people to hunt down these bloody bigots and smash their windows. I don”t envision him getting apopleptic over the fact that several Brits claim to have lost their jobs after the list was published. Their tales of woe left Assange so unmoved that about a year later, he released an enhanced version of the list said to contain over 16,000 names and addresses. Late in 2009, WikiLeaks was threatening to release hacked private messages from 11 different white-nationalist groups such as Aryan Nations and Volksfront.