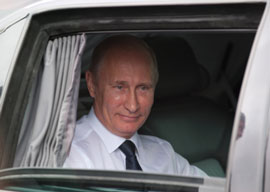 Regardless of what dog you have in the Ukrainian turmoil, it is clear that Putin’s plan is crude, transparent, and guaranteed to anger nearly everyone. Does anyone really believe that these “Ukrainian separatists” are native Ukrainian, given their Russian military uniforms, accents, and weapons? Is it really possible that these pro-Russian plebiscites were conducted fairly? Can there be such a thing as the Donetsk People’s Republic? Yes, Putin will probably succeed”he”ll absorb Crimea and Finlandize eastern Ukraine”but the price will be high, perhaps a net loss when viewed over the next decade.

Putin’s heavy-handed approach acknowledged, was there a better way? Let me suggest a proven alternative, one that would have accomplished the identical aim but without anybody raising an eyebrow: geographical annexation, American style. A wiser Putin might have studied urban American politics to master territorial conquest; think of ÐÐµÑÑÐ¾Ð¹Ñ, a city once called the “Paris of the Midwest.”

“Let me suggest a proven alternative, one that would have accomplished the identical aim but without anybody raising an eyebrow: geographical annexation, American style.”

Here’s the plan. Begin by infiltrating the target with non-indigenous people known for their unsavory character. Russia has an abundant supply of troublesome, often crime-prone people, notably Chechens, Roma (Gypsies), Tajiks, Turkmens, and a few Kurds. Special care should be taken with their location; for example, Roma camps should be near enough to cities to both be conspicuous and to put these distinctive people within easy predation range of the locals. Further, ensure that historic enemies reside within a stone’s throw of each other, and that they speak languages that nobody but they themselves speak. In short, create what Americans would call a Utopia of diversity.

Stage two entails installing the offspring of these new arrivals in the local schools, particularly favoring the youngsters most inclined to steal cars or deal drugs. And don”t worry about unruly classrooms, violent ethnic gangs, or the disrupted education of the natives. If traditional subjects like mathematics are neglected, do not fret”there will always be time later for this instruction.

For general subjects, hire experts to develop a multilingual curriculum, so newcomers can continue to learn while they”re still mastering the rudiments of Ukrainian. As for the upsurge in violence, schools will need conflict resolution experts for weekly trust-building exercises. For example, have little Vlad, a Russian-speaking Ukrainian, role-play a Roma boy who’s wandering around Kiev’s most upscale ladies” boutique, so he understands the stigma of being racially profiled. Also insist that kids ignore their ethnic backgrounds in friendship, sports, and social activities. Just wait until each school fields its multicultural, multilingual soccer team! Again, initial social tensions will evaporate once everybody gets to know one another.

And let’s not forget the parents. Government must create absorption centers staffed by multilingual instructors to teach Bukharans, Chechens, and all the others how to live in their new homeland: everything from why it is impolite to defecate in public to how to minimize honor killings. Add lessons on navigating the social welfare bureaucracy; since these newcomers are mostly homeless, they must immediately be given places in scarce state-subsidized housing. Local businesses should also be assigned employment quotas for newcomers, to whom they must supply on-the-job language training. Of particular importance will be learning to obtain medical benefits for seniors, since these immigrants have (with Putin’s blessing) arrived with dozens of elderly relatives who need expensive hospital and nursing home services.