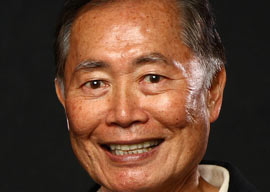 I’ve never seen a Star Trek movie and I”ve only seen one episode of the original TV series”the one with the Tribbles. Otherwise, the evidence leads me to suspect that subliminal messages littered throughout the various media comprising the Star Trek franchise have contributed greatly to homosexuality among science geeks.

George Takei (rhymes with “the gay”) played Mr. Sulu in the original TV show back when it was unfashionable to be openly homosexual. As a gay activist, a gay icon, a gay man, a gay Asian, and a gay husband, Takei may be the gayest man currently alive. He oozes gayness like the glaze on a candy apple.

But Takei not only basks in the status that his gayness affords him. This California-born Asian gayrod also scores mucho racial-sympathy points as a result of being housed in Japanese internment camps during World War II starting when he was five years old.

Armed with both homosexual sympathy and racial sympathy, Takei recently went on a two-pronged attack against Supreme Court Justice Clarence “The Black One” Thomas.

In a recent dissenting opinion on the landmark gay-marriage case Obergefell v. Hodges, Thomas had written:

Yeesh. You could have used a better metaphor there, Uncle Thomas. It would read a lot less harshly if, say, you’d swapped out “slaves” for “McDonald’s workers.”

[Thomas] is a clown in blackface sitting on the Supreme Court. He gets me that angry. He doesn’t belong there. And for him to say, slaves have dignity. I mean, doesn’t he know that slaves were in chains? That they were whipped on the back. If he saw the movie 12 Years a Slave, you know, they were raped. And he says they had dignity as slaves or”my parents lost everything that they worked for, in the middle of their lives, in their 30s. His business, my father’s business, our home, our freedom and we’re supposed to call that dignified? Marched out of our homes at gunpoint. I mean, this man does not belong on the Supreme Court. He is an embarrassment. He is a disgrace to America.

Oh, my! Obviously you’re upset, tiny dancer. Maybe you need to go take a bubble bath, sip some Merlot, and have yourself a good cry.

Let’s try to parse that whole thing about “a clown in blackface,” shall we? Takei appears to be alleging that Thomas is guilty of “acting white” and is no better than any other two-bit Uncle Tom or House Negro. So this is an Asian man telling a black man that he’s not truly black and is rather a white man wearing blackface…did I miss anything?

As far as I can discern, the gist of Takei’s message is that if a real black person who grew up in the segregated South doesn’t think exactly like a Democrat, their blackness suddenly and magically disappears in a puff of smoke. And Takei is qualified to call Thomas’s blackness into question because although he’s not technically black like Thomas is, he’s a pole-smoking concentration-camp survivor and thus holds two Oppression Cards to Thomas’s one.

Ah, sweet delicious intersectionality, where no one who ever claims to have been oppressed can ever get along with anyone else who’s oppressed because they’re always competing about which one of them was more oppressed! Who needs a television when you can just sit at the corner of Identity Avenue and Oppression Street and laugh at this never-ending unfolding sitcom? What on God’s rainbow-colored Earth is funnier than a nonblack person scolding a black person for not being true to their blackness?

This reminds me of a story a black writer friend of mine”yes, I once had one of those”told me about twenty years ago. He wrote a story for the Village Voice covering some Nelson Mandela parade in New York City and mentioned how he felt compelled to throw bananas at Mandela. His Jewish editor was aghast and gave him the old lecture about how “after all your people have been through, how could you even go there,” etc., etc. My friend told his editor, “Excuse me, but I’m the black guy here. Don’t tell me how I should feel. If I want to throw bananas at Mandela, you have no say-so in the matter.”

The same goes for Mr. Sulu. George Takei, you know nothing about being black, and a simple DNA test or an everyday wooden hand ruler would prove this.

Several commentators across the political spectrum referred to Takei’s “blackface” comment as “racist.” It was certainly racial. But this infantile scare word “racist” has been overused to the point of meaninglessness.

I suggest that if the value-neutral word “racial” were to replace the value-loaded word “racist” across the board, there’s a slight chance we all may finally be able to have a meaningful and sane conversation about race.