Mr. Waters, Tear Down Your Own Wall! 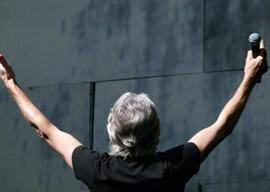 I watched Pink Floyd’s trippy rock opera The Wall on VHS at least a dozen times as a kid. So when I heard that Roger Waters was dragging The Wall Live stage show out of the 1980s and bringing it to Atlanta last month, I had to buy two tickets. Nostalgia compelled me to lay my dollars down, and judging from the graying, glassy-eyed rednecks shuffling around the merch table, I wasn’t the only one. I even bought a $7 Budweiser from one of the glad-handed vendors, who were as exclusively black as the crowd was white.

The lights go down and fascist soldiers drag a limp effigy of a vulnerable rock star into the spotlight. Reefer smoke and old-man flatulence drift through the air, and Roger Waters proves that one man’s magnetic narcissism can fill an entire arena.

The technical effects are fantastic. Video projectors spray ironic anti-government and anti-consumerist slogans onto a massive wall that is gradually built, brick by brick, across the stage. A gigantic inflatable pig floats over the crowd, emblazoned with the words TRUST US, a Shell Oil logo, a hammer and sickle, dollar signs, and right behind the pig’s unclean chops, a gleaming Star of David. The ADL just loves that sort of gag.

So where is Waters going with all of this?

More than one mush-mouthed enabler told me as a kid, “You gotta be trippin’ acid ta un’erstand ‘at Wall movie, man.” Maybe if you’re retarded, but one thing is certain: a concertgoer would never understand The Wall‘s live production without some familiarity with the film’s egomaniacal, racialized psychodrama, so let’s pretend we’re “trippin’ acid” and review.

The central metaphor of The Wall“you know, a wall”represents the hard shell that naturally develops around one’s squishy core to protect it from the cruel world. The film’s main character, “Pink Floyd,” loses his father in WWII. He is left to squirm in his overprotective mother’s arms and endure a mean schoolmaster’s sarcasm.

“Artists tend to be good at identifying social ills, but their remedies are so half-assed.”

All in all, each person who doesn’t let Pinky do what he wants is just another brick in The Wall.

These cartoonish inner demons appear in the live show as looming, technically stunning marionettes who still taunt Waters after all these years. When the spindly, pink-faced schoolmaster appears from over the wall, a group of local black children from The Atlanta Music Project are brought onstage to sing classic rock’s “Battle Hymn of the Illiterates“:

I thought to myself, “There’s a dozen more diplomas in the bag.”

Superstars don’t have to finish school, though. In the movie, the pitiful British boy grows up to be a pitiful rock star who gets rich, gets high, and becomes too introverted to make love to his wife. So she bangs a scarf-wearing activist instead”which has to sting much more than, say, a shirtless pool boy.

Our protagonist winds up in an expensive hotel room, where he flips out and throws wine bottles at a baby-faced American groupie whose only offense was sucking on the star’s fingers and talking in an annoying voice. At this point, Waters’s storyline hops out of the dugout and does literary backflips into left field.

After smashing his room to pieces and reassembling the mess into schizophrenic garbage art, Pink passes out in front of the television, apparently while watching a strange version of the 1955 British war film The Dam Busters which consists of back-to-back scenes of soldiers talking about a black Labrador named “Nigger.” (Something like this.)

Suddenly Pink’s manager busts through the door and the room is flooded with an unusually diverse assortment of paramedics and roadies. Pink is lifted by a black paramedic’s gentle arms. He’s given an injection. Then we see him carried by a black roadie to his limo, where the hallucinating rock star inexplicably morphs into a fascist psychopath in a crisp uniform. Out of nowhere, Pink takes the stage at a quasi-Nazi rally with an ethnic ax to grind.

Roger Waters performs this segment of the live show wearing sunglasses and an SS-style leather jacket. You have to wonder if he gets off on it. He hammers us with a satirical diatribe, singling out unwanted minorities in the crowd. I look around the arena and wonder who the hell he could be talking about.