MSNBC: Leaning Forward on the Edge of a Cliff 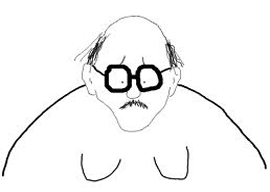 America’s midterm elections are on Tuesday, but they”ve already voted for their favorite news network, and it sure as hell ain”t the Microsoft/National Broadcasting Company. Have you seen their latest advertising campaign? How could you not? It’s the biggest campaign in the network’s history. They”re going with the remarkably bland catchphrase “Lean Forward,” which conjures up images of subway commuters going to work on a Monday morning (yawn), though in this case it’s more like a suicidal geriatric on the edge of a cliff.

Recent prime-time ratings show Fox with about 2.5 million viewers as MSNBC struggles for a third of that total. Fox couldn”t resist kicking their little brother in the nuts with a rival campaign entitled “Move Forward” and the tagline, “We don”t lean up against a wall. We break it down.” Awesome.

“It should be obvious why this ship is sinking. It’s full of fools.”

To watch the ads side-by-side is to see what was once two Americas but is now a big fat America and some anorexic in the corner shaking her tiny fist. The “Lean Forward” ad looks like a YouTube montage of home movies and sounds like an 80-year-old Mexican who just got out of bed. The message seems to be: “We don”t hate minorities.” Fox nods a polite “Thanks” and takes off with a blistering ad that shows reporters in the center of tear-gas clouds screaming their heads off while Hummers race through gigantic explosions in the background. Where MSNBC has kids waterskiing on a Sunday afternoon, Fox has the Coast Guard ripping through the water at 60 mph. This is how Fox pushed MSNBC out of the number-one spot. They said, “Move.”

It reminds me of these dueling giant poster ads I saw in Berlin a few years ago. You”d get off the train in the city center, walk up the stairs, and be met with a 200-foot-high Carlsberg beer bottle and the slogan, “Probably the best lager in the world.” A few days later Heineken covered an adjacent building with an equally tall poster saying, “The best lager in the world.”