Much Ado About ‘Compton’ 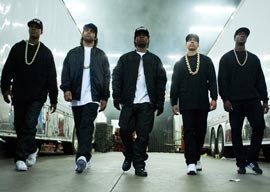 “Can”t go to a movie the first week it opens. Why? Because niggers are shooting at the screen.” “Chris Rock, 1997

Still wondering if Marco Rubio should get to sit behind that Resolute desk? Wonder no more!

Anyone know a good theatre in Manchester or Des Moines to catch #StraightOuttaCompton? Trailer looks amazing.

If you see a brand-new trailer on July 21, that means the movie isn”t actually in theaters yet. (Grandpa.) That’s why the word “PREVIEW” appears in big type, all caps, on that green card in the opening seconds. Next Rubio will be asking where he can buy the DVD…

And there’s nothing “amazing” about this particular preview anyhow. From the looks of it, Straight Outta Compton is just another Hollywood biopic. HEAR the excruciating “Hello my brother the Attorney General!”-style expository dialogue! SEE the fast-paced yet weirdly ponderous push-button imagery: corny period duds; “Hey, it’s that guy!” stunt casting (with accompanying stunt haircuts); the smash-cut smashing of glass and the chanting of crowds and the inevitable “uh-oh” blackout thud that signals That Bad Thing That Famously Happened.

“The English language doesn”t have a word to convey how little I care about this movie, rap/hip-hop/”urban” “music” in general, and the thugs, hustlers, and ignorami who create and listen to it. “

Each cynically spliced snippet is designed to deliver Milgram-like jolts of nostalgia-recognition-anticipation to the film’s intended (paying, all-important first-weekend) audience.

Of which I am decidedly not a member.

Straight Outta Compton is about the making of N.W.A’s”that’s Niggaz Wit Attitudes”””historic” first “gansta rap” album in 1988, and the lives of group members Ice Cube, Dr. Dre, and, frankly, who cares who else? Seriously: Go look them up yourself.

The English language doesn”t have a word to convey how little I care about this movie, rap/hip-hop/”urban” “music” in general, and the thugs, hustlers, and ignorami who create and listen to it.

I”m a fair trend-spotter, so it pains me to admit I was wrong about rap. I gave it five years”ten, tops”but it hung on like Terri Schiavo. How? At one point, the phrase “Rap is crap“ was almost as ubiquitous as its predecessor, “Disco sucks.” Like “Bloody Mary“ in reverse, “Disco sucks” had caused an entire international billion-dollar musical genre to disappear in disgrace.

So I kept waiting for the rap version of Disco Demolition Night. It never came.

Instead, this monotonous “music” now gets honored in the Rock and Roll (?!) Hall of Fame. Weirdly (or not), whites”or in Rubio’s case, nonblacks”are the genre’s largest fan base.

At this point, compulsive Taki’s commenters will be scrolling down to the comments to blame this sad, sinister state of pop culture affairs on “the JOOOOOOOZ!!!” I”m risking my monthly ZOG check here, but when outlets as divergent as Farrakhan’s Final Call and The Forward agree, who am I to argue for once? Yep: The Jews did it.

When it comes to hip-hop, gentiles”from wiggers to hipsters”are at their embarrassing worst. They have adopted the ugly slang and even uglier clothing, debate hip-hop’s supposed subtle permutations like they”re wine vintages, and know way too many details about the genre’s sordid, high-body-count history: East Coast vs. West Coast “beefs,” and who shot Biggie or Smallie or Snoopy.

Hell, even I know that the most notorious song on N.W.A’s debut was a little ditty called “Fuck tha Police.” Say, is that “amazing” too, Marco? What will the Cleveland delegates think?

Oh, and when you finally track down that theater you”re looking for, will there be plenty of said police inside and out?

Because so far the only notable thing about Straight Outta Compton“no, not that brain-dead Internet meme“has been articles like this that began appearing just before the movie’s debut:

Universal is offering money for private security for theaters during the opening weekend for “Straight Outta Compton.”

And law-enforcement agencies in Los Angeles increased their presence at theaters showing the film, reportedly in response to requests from theater owners.