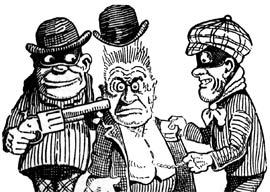 Last Tuesday night I was walking down a poorly lit Brooklyn street en route to meet a friend for dinner when suddenly I noticed a black male strolling alongside me.

He wasn”t walking ahead of me or behind me”he was about three feet to my right as if we were best pals and we”d been walking together the whole time. At first I presumed it was a coincidence”that we merely happened to be going the same speed and that within a half-block, one of us would pull ahead of the other and that would be the end of it.

A block later, I tried crossing the street merely to shake him. He stayed glued to my side. After another whole block, I stopped, looked him straight in the eyes, and said, “What’s going on here? Why are you following me?”

He stopped along with me. His glazed eyes looked straight into mine. He didn”t say a word. He only nodded in the affirmative, even though I hadn”t asked him a yes-or-no question.

So I crossed the street again, and he crossed with me, stuck to my side like a Siamese twin. Oh, sorry”a Nigerian twin, maybe?

He was walking alongside me so deliberately that I suspected he was a designated escort leading me into some sort of ambush.

“Such is life in a big city teeming with biodiversity.”

I knew I had suddenly found myself in a potentially dangerous situation, but I wasn”t sweating and my heart wasn”t pumping any faster. I have this personality quirk where I”m neurotic as Woody Allen when there’s no clear and present danger, but when there’s an immediate risk of dying, I”m cold, calm, and calculating.

I kept him in my visual periphery and breathed deeply as I remembered all the joint locks and leg sweeps I”d learned in martial-arts classes. At one point I reached inside my denim jacket to pantomime that I was concealing a gun, then I pulled my hand out quickly when I realized that if he actually was toting a pistol, I might have been signing my death warrant by reaching for a gun that wasn”t there.

After more than three blocks of this creepy urban polar bear hunt, I walked up to a pair of young hipstery girls who were closing up shop and locking the doors to their bakery.

My new unwanted friend stopped alongside with me.

“I know this is weird,” I continued to the pale-as-bakery-dough girls, “but this guy’s been following me for about a half-mile and I don”t know what to do here. I asked him what’s going on, and he wouldn’t even say anything.”

One of them looked at my walking companion and asked, “Are you OK, sir?”

He nodded in the affirmative.

“This is weird, right?” I asked the girls, and they nodded in the affirmative.

They asked me whether they should unlock the bakery and allow me to wait inside until he vamoosed. I said he”d probably simply keep waiting, plus I didn”t think they should be forced to wait along with me. I also said that I didn”t like cops and didn”t want to get the cops involved.

At the mention of the word “cops,” my pedestrian stalker bolted back in the direction whence we”d come.

I apologized to the girls. “I”m really sorry to have bothered you, but you were the only sign of civilization around here.”

When I met my friend for dinner and told him what happened, he speculated that I was being set up for a “soft mugging,” which is a term for when homeless people attach themselves to you and won”t leave until you give them some money.