Muhammad and the Sexy Nun 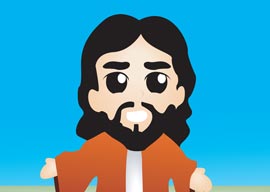 Of all the contentious issues on the cultural and political scene today, the “draw Muhammad” controversy seems to bring out the most unsavory types, on all sides. It’s like sitting through a sporting event in which your two least favorite teams are playing, with vendors hawking your least favorite food, and a halftime show featuring your least favorite band (admit it”you just thought of the Black Eyed Peas).

First we have Pam Geller, who sees Muslim conspiracies hiding in every closet and under every Bedouin. She once picketed an Off Broadway production of Our Town for using muslin. Geller will make any claim, no matter how false, because publicity is always a better deal than integrity. I”ve been fact-checking this extremist loon since my days with the GOP, and her presence in any controversy only serves to take away from the legitimate points of the people who make the mistake of throwing in with her.

Next we have the paragons of tolerance, those exemplars of cultural sensitivity, the Left. Is there anyone in this country except perhaps leftists themselves who doesn”t see the blatant hypocrisy of denouncing Muhammad drawings as “offensive” and “insensitive” while celebrating (sometimes at taxpayer expense) every conceivable insult to Christianity? As I pointed out in an L.A. Times piece in 2005, the same people who furiously decried the inadvertent (and, it turned out, fictional) splashing of a Koran with urine at Gitmo made sure you fine folks paid for “artwork” that featured a Bible in a toilet.

“Never let anyone call you the ‘aggressor’ for defying a speech prohibition; the aggressors are the ones demanding it.”

And then we have the libertarians (and some conservatives) who take the position that sure, drawing Muhammad should be legal, and maybe swift death shouldn”t be the penalty for doing it, but why do it in the first place? Who needs to draw Muhammad? Why would anybody ever want that “right”? Yet these are the same people who become enraged whenever liberals take a similar position regarding gun rights. “Why does anyone need a clip that large? Why do you need a gun that fires that many rounds? Why can”t you wait seven days for a purchase? Why do you need more than one handgun per month?” Saying “I”m against people drawing Muhammad because I never plan to do it” is like saying “I”m against semiautomatic weapons because I never plan to own one.” Think of parading around in public with a Muhammad drawing as a kind of “First Amendment open carry.” What good is a right if you can”t exercise it publicly?

And let’s not forget the Muslims and the fringe conspiracy buffs who love to shout, “Why is drawing Muhammad legal in Europe but things that offend the Jews, like Holocaust revisionism, are illegal?! Muslims should have their sensitivities protected too.” It’s a poor argument, because at its core it’s arguing that one group’s success at censoring “offensive” speech justifies another’s. Anti-speech laws need to be revoked, not expanded. Your humble author has been threatened, beaten, and fired, and has had his entire life upended, because of his advocacy for Holocaust revisionism. So I”m immune to the “hypocrite” argument, as is anyone else who believes in both the right to draw Muhammad and the right to question mainstream Holocaust history.

My point of view is this: Muhammad is a figure in world history, and, as such, he belongs to all of us, just like George Washington, Jesus, King Tut, Buddha, Ivan the Terrible, Confucius, Martin Luther, Socrates, and Henry VIII. Every human being has a right to write about, read about, draw, question, and mock anything in world history. It is our birthright. And any person or group that seeks to limit that right through laws or violence must be countered. And yes, get in their faces about it, as I did in my youth regarding the Holocaust. No group”not Jews, not Muslims”has the right to say, “You can”t touch “our” history because we find it offensive.” It’s human history; we all own it equally. And never let anyone call you the “aggressor” for defying a speech prohibition; the aggressors are the ones demanding it.

Do I feel sympathy for a young Muslim immigrant girl living in, say, Texas who sees Muhammad drawings as a form of hate or intimidation? Sure, I do. But it should be our job to help little Basheera understand that in the long run, the right to draw Muhammad”and the free exercise thereof”is good for society, and perhaps one day even she might find those “offensive” Western freedoms valuable in her own life.