Muirfield in the Rough 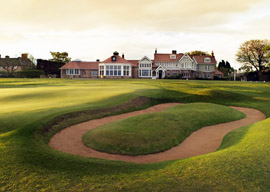 Muirfield, a few miles out of Edinburgh on the East Lothian coast, is one of the world’s great golf courses. Indeed the magazine Golf Monthly has rated it the best of all. Jack Nicklaus won the first of his three Open Championships there in 1966, and when he designed his own course in Dublin, Ohio, he named it Muirfield Village. Other winners there include Harry Vardon and James Braid (two of the pre-1914 Triumvirate), Walter Hagen, Henry Cotton, Gary Player, Lee Trevino, Tom Watson, Nick Faldo, Ernie Els, and Phil Mickelson. The Open has been held there fourteen times, and, as you can see, it has almost always produced a great champion. But there will be no more Opens at Muirfield, for some time at least. The Championship Committee of the R&A has just removed the course from its rota of Open venues.

The reason? Muirfield”more properly the Honourable Company of Edinburgh Golfers”is a men-only club, and the members have just rejected a proposal to open the membership to ladies. There was actually a majority in favor of the motion, but the rules of the club require a two-thirds majority for change, and the vote fell just short of this.

The rejection of the proposal has stirred up what in Scotland we call a fine stushie. “Antediluvian” is perhaps the least uncomplimentary term of abuse directed at the Honourable Company. They would, it seems, be dinosaurs if they weren”t still alive. The expression of outrage isn”t surprising. Sexism is one of today’s Deadly Sins, nowhere more so than in Scotland. We”ve come a long way since John Knox, the leader of the 16th-century Scottish Reformation, inveighed against what he described as “The Monstrous Regiment of Women.” By “regiment” he meant “rule,” and doubtless if he were still with us, he would look at Scotland today with horror. The First Minister of Scotland is a woman, Nicola Sturgeon, and the leaders of the two main opposition parties are also women. There are female Senators of the College of Justice (as senior judges are called here), but, though the Honourable Company is seen as a pillar of the legal establishment, these judges can”t be members of Muirfield. Contrary to common belief, they can play golf there as guests of members, and even as visitors, but they can”t join the Honourable Company. Other bastions of male privilege or exclusivity may have been breached, but not Muirfield. A club that still requires members, guests, and visitors to wear a jacket and tie at lunch isn”t in any hurry to embrace the 21st century. (Some of its critics would say it has scarcely emerged from the 19th.)

“Even losing battles are sometimes worth fighting”for the sake of honor, if for no other reason.”

It’s a place where tradition rules. This isn”t surprising. The Honourable Company dates from 1744, when it was known as “The Gentlemen Golfers” and played on a five-hole course on Leith Links. It drew up the first rules of golf, and more than a century passed before it handed over responsibility for the rules to the Royal and Ancient at St. Andrews, which, by the way, itself consented to admit lady members only some three years ago.

Even the golf played by the members is old-fashioned. The club secretary quite recently said that a Muirfield day lasts seven and a half hours: two and a half for the morning round, two and a half for lunch, then two and a half for the afternoon one. Only two and a half hours for a round of golf? How come? Well, at Muirfield four balls are frowned on, severely. You play either singles or foursomes, the two-ball four-player format that professionals play only in the Ryder Cup. This is admirable. I was always a golfing rabbit myself, one who would never have dared to play a course as demanding as Muirfield. But I always found foursomes the best form of the game, and the most enjoyable golf I had was playing foursomes with another rabbit and two friends with respectable handicaps. This gave me and my fellow rabbit the unusual opportunity to play a second shot into the green, while our partners might have the equally unusual experience (for them) of either exploring parts of the rough they didn”t know existed or playing their second after one of us rabbits had topped a drive and sent it scuttling a mere sixty yards along the fairway. So I think the old boys at Muirfield have the right view of how the game should be played, just as I approve of their two-and-a-half-hour lunches. Indeed old boys or, if you prefer, old buffers are just what many of those who voted against the admission of lady members undoubtedly are. Some are very old indeed. One of those who signed a letter urging fellow members to vote against the motion to admit ladies to membership of the Honourable Company is so venerable that I remember seeing him play rugby for Scotland way back in the early 1950s when I was a schoolboy in short trousers.

Actually I have a good deal of sympathy and some admiration for the old buffers. I like to see people remaining true to their principles, even their prejudices, and sticking up for them, defending them in the last ditch. Even losing battles, even doomed ones, are sometimes worth fighting”for the sake of honor, if for no other reason. So I feel for those members of the Honourable Company who voted no and set their face against the world of today, just as I feel for those in the Southern states who are determined to maintain their right to fly the Confederate flag.

Moreover there is some merit in their argument. Muirfield is a private club. It receives no public money. So its affairs are properly no concern of politicians. In any case the essence of a club is that its members decide who should, and who should not, be invited or permitted to join. If charged with discrimination, the Honourable Company might say this works both ways. There are, after all, ladies” golf clubs, and there are women-only gyms that would deny them entry in the admittedly unlikely event of one of the old buffers wishing to don a leotard and lift weights. Joking aside, you might even argue that the freedom to decide who joins your club is guaranteed by the European Convention on Human Rights, which says everyone is entitled to privacy.