Multiculturalism is Dead, So Where Do We Bury the Body? 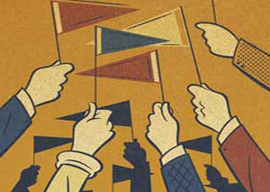 I”ll never forget a painting I saw at a West Berlin youth hostel in 1985. The background depicted bombed-out ruins, presumably Dresden after the Allied firestorm. In the foreground were two women, their backs to us as they faced the charred, blown-out buildings. One woman was starting to lift her arm in a Sieg Heil salute, while the other rushed to grab her arm and stop her.

What a weird image it was, mixing national pride with national defeat and national self-loathing.

After World War II ended, no nation on Earth has been force-fed as many Guilt Sandwiches as the Germans, despite the fact that they”d lost seven to nine million of their own Volk in that conflict. One never hears about “the nine million.” It’s nearly verboten to even mention them.

When I saw that painting in 1985, Germany had already endured four decades of post-WWII shaming. Despite all that, I knew that sooner or later, that one lady would tire of holding down the other lady’s arm.

In Frankfurt am Main, two out of three children under the age of five have an immigrant background….This multicultural approach, saying that we simply live side by side and are happy about each other, this approach has failed, utterly failed.

For five years running, the stout, doughy Merkel has been Nummer Eins on Forbes magazine’s list of “The World’s Most Powerful Women,” so her statement is no small potatoes. But only a month earlier, Merkel was telling Germans that they should get used to seeing more mosques in their country. She was also condemning Thilo Sarrazin’s “absurd, insane opinions” as expressed in his shockingly popular book Germany Abolishes Itself.

It’s unclear why Merkel has suddenly shifted her ample hips rightward. She could be responding to recent polls showing that six in ten Germans would like to see Islam restricted, three in ten say they feel their country is “overrun by foreigners,” seventeen percent say that Jews have an undue influence over German affairs [oops!], and thirteen percent say they”d welcome a new FÃ¼hrer [now hold it right there!].

There go those pesky Germans again, refusing to hate themselves. How dare a German say anything besides “I”m sorry” for the next thousand years?

I don”t see the upside to our newer, more multicultural America. The only thing we share is the currency, and maybe that was the point all along.

Everyone expected the Germans to get an attitude sooner or later”after all, they”re the Germans. What seems more troubling, at least to the sworn enemies of All Things European, is that all of Europe seems to be getting the same attitude simultaneously.

What one might refer to as indigenous Europeans”you know, the palefaces, the Ice People, the Ghost Men, the Evil Aryans, the Abominable Snowmen”are beginning to chafe at the iron rainbow to which they”ve been yoked since World War II. Geert Wilders has blossomed into a political force solely by promising to protect Dutch culture from Islamofascism. An anti-immigration party just placed twenty anti-immigration asses into the Swedish Parliament’s seats. France is goin” wild banning burqas and sending the Roma packing. The Swiss have flipped the bird at minarets. Putin’s brand of post-Soviet Russian nationalism is insanely popular, at least among insane Russians.