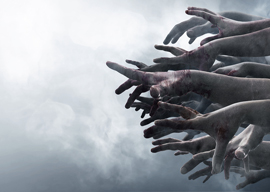 There have long been complaints about crime—the quality of it, I mean, not the quantity. It seems so sordid and ordinary these days by comparison with the past. The passage of time covers murder, especially, with a patina of romance and even, in some cases, with humor. Events terrible and terrifying when they happened become subjects of ironical detachment years later.

George Orwell complained of the decline of the English murder (in quality) seventy years ago, and Virginia Woolf’s father, Leslie Stephen, complained of the same thing eighty years before that. The fact is that murder has long been a preoccupation of literary intellectuals. When, for example, the poet Tennyson sat up talking all night with the classical scholar and translator of Plato, Benjamin Jowett, the subject of their interminable conversation was murder.

Apart from the intrinsic interest of the subject, there is something deeply consolatory, at least to me, about reading the crime books of the past. They reassure one that there is indeed no new thing under the sun, certainly not when it comes to human wickedness. If things are bad, at least they have always been bad. Moreover, the fact that they will probably continue to be bad absolves one of the moral necessity to try to bring about transformation. One can relax and enjoy things as they are, a degree of unselfconscious complacency being a precondition of a happy life.

The other day I picked up a volume by a Scottish writer who was once famous, William Roughead, titled Neck or Nothing. It was published in the very month of the outbreak of the Second World War, September 1939, and the title refers to the outcome of murder trials before the abolition of the death penalty: hanging or acquittal.

“There is something deeply consolatory, at least to me, about reading the crime books of the past.”

Roughead, who lived from 1870 to 1952, was a lawyer who did not practice and was the originator of the genre of true-crime writing. He was very much admired by Henry James, who was fulsome in his praise of his work. It is odd that a man of such refined and one might almost say etiolated feeling as James should have so enjoyed immersing himself (imaginatively, of course) in the poisonings, decapitations, dismemberments, and illicit disposals of corpses that it was Roughead’s specialty to relate, usually with a faint hint of facetiousness. But the fact is that murder, at least when it is distant from us, captivates us all.

Reading Roughead reminds us that our dilemmas are not new, and that arguments over the causes of crime are old, recurrent, and without resolution. In one chapter, for example, titled “Killing No Murder,” he recounts two then-recent killings in Edinburgh, in 1934 and 1935, respectively, by young men of young women. Psychiatric evidence was called in both subsequent trials, and in both of them the psychiatrists (one of them, David Henderson, later wrote a celebrated book on the subject of psychopaths and psychopathy) convinced the court, on very flimsy grounds, that the young men could not be accounted fully responsible for their actions, and they thereby escaped hanging.

I have myself given evidence in cases in which various psychiatrists have sought to explain (or is it excuse?) murderers because of their difficult childhoods, poor upbringing, bad education, and so forth. I have watched the relatives of victims foully done to death squirm with pain and disgust as feeble exculpations of the culprits are offered in the language not so much of science as of jargon. Roughead, who was as alive to the possibility of wrongful conviction as anyone, says at the end of his two cases:

Here we have two strong, healthy young women both wantonly butchered in the heyday of life, the one elaborately strangled, the other brutally battered to death…. At the risk of being deemed unduly sentimental, I confess to feeling for the unfriended victims more sympathy than for the interesting executors of their so hideous doom.

The problem resides in this: that sometimes murder does result from madness, which exculpates it entirely; and no system of justice worthy of the name can afford to disregard lesser, but still present, degrees of extenuation. Assessment of the degree is a matter of judgment, and judgment can always be wrong. All too often we expand extenuation so that it amounts to excuse and exculpation. At the other end of the spectrum, of course, there is unfeeling censoriousness and draconian severity, which disguises a lust for cruelty as a thirst for justice.

In this book, Roughead describes a case from 1740 in which a prosperous widow and her daughter use a servant girl so brutally that she dies. Their crime was uncovered and they were duly executed.

Among other tortures they inflicted on their servant girl after having fractured her skull and breaking other bones of hers, they plunged her hands into boiling water. How does one explain such extremity of cruelty? But it still goes on. One of the last murderesses I examined had, with her associates, broken the legs and ribs of an old handicapped man in an attempt to extract the repayment of a small monetary debt from him. Then they poured boiling water over him and left him to die.