Museum of the Living Dead 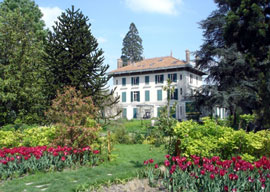 It took me two attempts to visit the MusÃ©e de l”histoire vivante“the Museum of Living History”in Montreuil, in the suburbs of Paris. The first time, because I was with my wife, I went in a taxi. It was not an entirely wasted journey, even though when we arrived, the man at the gate told us”not I suspect without the malice that is the only solace of minor functionaries”that it was closed.

The journey was not entirely wasted because the taxi driver, a woman, told us some interesting things on the way (on the whole I would rather spend an hour with a taxi driver than with the president of a republic): for example, that the reason she did not wear a seat belt was to prevent her passengers from pulling on it and strangling her while they robbed her. She also sometimes wore a scarf around the lower half of her face to forestall clumsy attempts at seduction by male patients in lieu of payment. This proves to me that France remains a much more cultured country than England, where, in the small town in which I live, drunk girls press their bare breasts against taxi windows in the hope of a free ride home. However, this happens only at weekends, so there is still room for deterioration.

The second time I went to Montreuil”to which not more than one in ten thousand visitors to Paris ever sets foot, I should imagine”was by public transport: MÃ©tro and bus.

Montreuil reminded me strongly of something: ah yes, I remember what it was, Eastern Europe in the good old days. It had that same air of inspissated gloom and ontological pointlessness; the architecture would have gladdened the heart (so to speak) of Elena Ceausescu. The bus passed through a wasteland of 1970s modernism, egalitarian doctrine made not so much flesh as concrete. The buildings did not age, they dilapidated; it was architecture that induced immediate thoughts of suicide. (Le Corbusier is still revered in France and treated as a hero, though it should be obvious to anyone who reads any of his voluminous writings that he was a psychopathic architectural delinquent of totalitarian pretensions whose talents belonged more to the field of propaganda than to those of architecture, in which his abilities were all negative.) The bus stops were in places such as Saint-Just, the patron saint of revolutionary terror, and Nouvelle France: new in the same sense that the New Man, so beloved of Mussolini and Che Guevara, was going to be new. Montreuil is, in fact, firmly communist, and it shows, although honesty compels me to admit that I don”t know which came first: the communism or the ugliness of everything. Probably the relationship is what Marxists used to call a dialectical one.

The bus ride was interesting because I noticed that no one paid; I suppose that Montreuil’s inhabitants felt that if they had to live there, free bus rides were some very slight compensation. I suspect a ticket inspection would have caused a riot; allowing people to evade fares was a cheap way of maintaining the peace.

I gave up my seat to an oldish black lady with four heavy bags who immediately (and loudly) called down the blessings of God on me and then regaled the passengers at the top of her voice with the story of her life which included the infidelity of her late husband (but all men are like that), interspersed with snatches of hymns ending in hallelujah. Everyone was amused except for the slightly menacing-looking young men who couldn”t hear her because they were listening down their earphones to rap music with vile lyrics, and who will suffer from well-merited deafness by the age of forty. (On the MÃ©tro on the way back I sat opposite someone who looked uncommonly like a Muslim fanatic, who read snatches of the Koran and then started reciting prayers with a faraway look of religious ecstasy”or perhaps it was only the cannabis.)