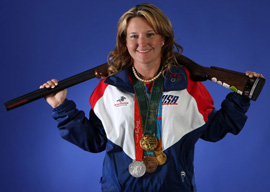 Let me put this in perspective. There are about 13,000 Olympians, both summer and winter, during each four-year cycle. Since 1896, when the modern Games began, there have been 184,869 Olympians. So we”re talking about something that happens .001 percent of the time, which is just one click above…never.

The first athlete is Armin ZÃ¶ggeler, a carabiniere from the Tyrolean Alps who has won two gold medals, one silver medal, and three bronzes during the 1994 through 2014 Winter Games. Armin’s nickname is “Ice Blood,” and you”ll see why if you watch his 2002 Salt Lake City luge run on YouTube. Luge is one of those sports that require constant daily training, constant care of your equipment, and such fine-tuning that the winners and losers are judged by thousandths of a second. It’s the most precisely timed sport in the world.

The Italians feel so strongly about Armin ZÃ¶ggeler’s six-medals-in-six-Olympics feat that they”ve asked him to carry the national flag in opening and closing ceremonies three times. He was only able to accept twice because the other time would have interfered with his training runs.

The other six-in-six Olympian is a woman from Southern California. She should have been asked to carry the flag at the closing ceremonies in Rio. I have nothing but respect for Simone Biles and her five medals in gymnastics, but this sixth medal in six Olympic Games was not only a once-in-a-century achievement, it was also accomplished by a 37-year-old woman who was fighting injuries, who was struggling against decades of sexism in her sport’s Olympic organization, who has to train by herself while raising a 3-year-old son, and who had to learn a whole new sport halfway through her medal run because the Olympics decided only men could compete in her preferred event.

It would have been a phenomenal milestone simply for her to compete in six Olympics, but 130 other people have done that. Most of those six-time athletes came from smaller countries where it was easy to qualify. Not so for our American champion. She had to re-qualify each time for one of only two American slots in a sport where a single mistake can mean the difference between winning and fifth place, and then she had to earn her medals in the most competitive sport in the world”more nations compete in her event than in any other sport.

Wouldn”t it have been fitting to follow the tradition established in many past Olympics in which a very senior athlete with a long record of victory is honored by being asked to carry the flag? That’s what was done at the opening ceremonies, when Michael Phelps carried the American flag to show respect for his earth-shattering records in swimming. That’s what Great Britain was doing when it had 36-year-old field-hockey captain Kate Richardson-Walsh carry the Union Jack. That was the idea behind 40-year-old volleyball player Sergey Tetyukhin hoisting the colors for Russia. That was why Germany handed its flag to Timo Boll, a 35-year-old table-tennis player.

But our champion didn”t even get a Bob Costas interview. Don”t get me wrong, I wouldn”t wish a Bob Costas interview on anyone, but as the principal commentator on NBC, the network that paid $1.23 billion for broadcast rights, you would think Costas could take two minutes to say, “Hey, nice work. Six medals in six Olympics. The only woman to ever come close to that. Mind-blowing.” Instead you had to go to the NBC YouTube channel, or the NBC website, or catch the 15-second wrap-up at the end of the day. The BBC did a better job of covering the event and Great Britain didn”t even have anyone in the finals.

Bob Costas did, however, do an extended interview with Shaun White, another Southern Californian. Remember Shaun White, the snowboarder whose medal count in the 2014 Sochi Olympics was…zero? Yeah, that Shaun White. He was hanging around Rio for some reason and Bob apparently thought we would like that warm, fuzzy “reality-show reject” feeling you get when you see a self-promoting skater dude in board shorts.

She carries, to be precise, a custom-made Beretta DT11, which is the second gun she’s competed with ever since “Old Faithful,” the competition Perazzi she used for 18 years, was stolen by crackheads who broke into a locked compartment of her pickup while she was inside a shopping center in Lake Elsinore. That was in 2008, and even though a dedicated Riverside County sheriff’s detective recovered the gun a year later, she had already started practicing with a new one and had made adjustments for the altered recoil and ammo load.

And while we”re on the subject of ammo load, Kimberly Rhode is so well-known in shooting circles that the Winchester Repeating Arms Company of New Haven, Conn., developed a special shotgun shell just for her, with a load that reduces the recoil on her overtaxed right shoulder. Here’s a wow fact for you: Kimberly is one of only four people pictured on a Winchester ammunition box since the founding of the company in 1855. The other three are company founder Oliver Winchester, Teddy Roosevelt, and John Wayne.

The reduced-recoil ammo was especially important after she had a difficult pregnancy in 2013 followed by gallbladder surgery and a series of medical complications that made her unable to walk for an extended period and only at 70 percent of her physical capacity going into the Rio Olympics. Since she’s one of the most bubbly, upbeat, optimistic people ever to wear an American uniform, she didn”t mention any of this in her press interviews. She simply bucked up and got it done.

And she did it the hard way. In the qualifying round of women’s skeet, she hit 72 out of 75 targets, just one behind Meng Wei of China.

In the semifinals, in which six women fire at 16 targets to determine who advances to the gold and bronze rounds, Chiara Cainero of Italy was a perfect 16-for-16 and her teammate Diana Bascosi missed once, meaning Italy locked up gold and silver. But three shooters had missed twice, resulting in a sudden-death shoot-off between Meng Wei, Kimberly Rhode, and the No. 1-ranked shooter in the world, 22-year-old Morgan Craft of Muncy Valley, Penn., which is an unincorporated dot on the map in the Pocono Mountains.

In a three-way sudden-death shoot-off for two positions, the first one to miss…loses. No pressure there.

Each woman shot three perfect rounds. On the fourth try, one of them lost concentration and broke”and it was Morgan Craft. Kimberly Rhode had fought her way into the bronze-medal match with a chance to make history.

The bronze-medal round always has a drama that the gold medal round lacks”because both competitors for gold are already assured of a medal. In a sport like skeet, where everything is about composure and steadiness, stakes like that can be overwhelming.

Adding to the pressure was that this had now become one of the most dramatic moments of any Olympics, since one shot by either woman could either establish a virtually unbreakable record or send Kim back to the ranks of Olympians who “almost did it.” On this day the bleachers were full.

On the first shot, nerves got the better of both women. Both of them missed. These are women who routinely hit 95 out of 100 moving targets, so it had to be the atmosphere.

And who could blame them? Shooting is a sport that normally occurs in quiet environments”duck blinds, gun ranges, open fields, places like Tillar, Ark., where the Olympic trials were held earlier this year. You”ve probably never been to Tillar (population: 222), but I have, and let’s just say that you won”t be accessing Uber on your smartphone while you”re out there. The closest thing to a tourist attraction around Tillar is the ruins of the World War II Japanese internment camp, famous because one of its inmates was George Takei, who would go on to play Commander Sulu on Star Trek. Tillar also has a mosquito population normally found only in Irwin Allen disaster movies. Nobody goes to Tillar to be a spectator.

But then there’s that one time, every four years, when a large crowd sits in the stands to watch the Olympics, roaring at every burst pigeon and audibly sighing when a clay is missed. It’s a big adjustment for a shooter, since your whole body has to be relaxed while you rest the gun on your hip, wait for the pigeon to be released, raise the gun to your shoulder, swing it horizontally in coordination with a four-inch disk traveling at 58.6 feet per second, lead it by several feet, and fire within the 1.7 seconds it remains in the kill zone. In the doubles part of the event, you have to fire twice in the kill zone at objects that are traveling in opposite directions.

In the Rhode/Wei shoot-off for the bronze medal, suspense ran so high that every single shot resulted in cheers from the crowd”until the final shot was fired. That would be the shot in the seventh round when Meng Wei missed.

Kimberly Rhode had been in situations like that before. Kimberly Rhode sings a song in her head while she’s shooting so that she won”t be too concentrated on the job at hand and her muscle memory will take over. Sometimes she tweets between rounds to take her mind off the competition. In the past, when she’s been in arenas where people were cheering, she has started to tear up and her friends and family have worried that the tears would cloud her vision and she wouldn”t be able to see the next pigeon. On this day, the tears didn”t flow freely until the final moment, when the crowd rose for a standing ovation. One of the people who rose with them was Thomas Bach, the German lawyer who currently serves as President of the International Olympic Committee. I have to assume that Bach is a busy man, seeing as he runs the most complicated sporting event in the world, but he made his way out to the Olympic Shooting Centre, in a western suburb of Rio, because he “wanted to see history made.”

And he did see it made. Even if Bob Costas didn”t. Even if NBC didn”t. Even if most Americans didn”t because they were too preoccupied with reports that day about Ryan Lochte ripping up a gas-station restroom and lying to his mother.

Normally I don”t believe in “media conspiracy” theories, but when we have a president and a highly visible presidential candidate constantly making antigun statements, repeatedly trying to reclassify sporting weapons as assault weapons, blaming terrorism on gun ownership, you have to wonder whether politics don”t filter down into the choice of flag bearers and the decisions about media exposure. Kimberly Rhode is a member of the National Rifle Association and an outspoken supporter of the Second Amendment. How could she not be? She started hunting rabbits and doves at age 3, armed with a BB gun and a pellet gun, and she learned to shoot competitively at age 10 through a free program sponsored by the NRA. At age 12 she went on her first safari.