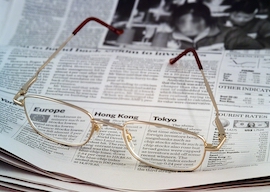 CHICAGO—We used to make fun of anybody who would be so arrogant as to put a byline on his own article. In fact, it was sort of the definition of weirdos in the newsroom: effete literary guys in love with their own prose. Fortunately we had city editors who would blue-pencil a big delete sign across these clumsy attempts at personal credit and say, “Hey, Big Shot, we know your name!”

Bylines were awarded by the editor. They were awarded for exceptional work or when the article was so personal the reader needed to connect with a name. Senior columnists had bylines. Hugh Aynesworth and Jim Lehrer were given bylines for their eyewitness coverage of the Kennedy assassination. But for most breaking news short of that level, most articles were unsigned.

This came up recently when someone asked if my juvenilia from the Arkansas Democrat, some of it written when I was 13 years old, was archived online. And I said that yes it was, but I averaged about ten articles a day and maybe one of those per month had a byline, so the bulk of it would be unsearchable. Officially I was an “apprentice copy boy,” but when you worked for the struggling afternoon paper, every apprentice copy boy was expected to write ten articles a day.

And then at some point reporters became journalists. They love the French word. Journalists need bylines on everything. There are articles in The New York Times that are two sentences long and they still have bylines on them. The “Talk of the Town” section of The New Yorker was unsigned for seventy years before somebody decided, “We should stick bylines at the end of these short cutesy feature pieces.” As I write this I’m looking at the front page of the Times and the lead story (about Iran’s enriched uranium stockpile) has three bylines on it—four if you count the adjoining “News Analysis” piece. Sticking a “News Analysis” subhead at the top of an article has become the standard Times procedure for putting opinion on the front page. You would think that, if it takes four people to report one story, that would pretty much be the definition of a “Reported by Staff of the Times” situation. But no, they feel the need to list the individuals by name.

“There used to be entire publications that were unsigned.”

And while we’re on this topic, how do three people write an article in the first place? Dan Jenkins used to say that collaboration was like two people trying to have sex with the same dog (only he didn’t say “have sex”), but three people? Do they take turns writing sentences? Do they play that parlor game for children where each kid says a word in a sentence and then the next kid has to continue the sentence? Do they work eight-hour shifts while reporting the story? “Please tell the Secretary of State that if he calls back after 10 p.m., he will be interviewed by my colleague in our Hyderabad Call Center.”

There used to be entire publications that were unsigned. Besides working for daily general-interest newspapers, I also did stints as a stringer for Daily Variety, the bible of entertainment news, and the Daily Racing Form, the bible of horse racing news. At Variety we had disguised bylines—four-letter nonsense names appended to the end of trade reviews so that the publisher would know who to pay at the end of the month. At the Racing Form you had to cut your unsigned articles out of the paper, paste them onto endless rolls of paper (hence the “string” in stringer), and mail them in so that you could be paid by the inch. It never occurred to the editors at either publication to simply say, “Let’s byline every article,” because they would have considered that unprofessional, pretentious, and silly.

If you ask a news executive today the reason for the proliferation of bylines on articles that don’t need them, the answer will be some mumbling about “accountability” and “transparency,” but that’s not the reason. You can be accountable and transparent by having the newspaper itself take the heat for whatever it prints. This is actually what the law says you should do, and it’s deeply ingrained into American history. When you sue for libel, you sue the printer of the article, not the writer. Benjamin Franklin described himself as a printer, never a journalist (in spite of his love for the French). So insisting on bylines is at least in part an attempt to shuffle off responsibility for the truth to an individual instead of standing behind all the individuals who make up the voice of the publication itself. Put another way, it’s a way for the editor to say, “This one lousy reporter did this, it wasn’t us”—and fire that person to deflect liability.

The other reason for the byline, of course, is to give credit instead of salary. Every reporter wants a byline, even a byline devalued by a business that hands them out like candy. You grant bylines instead of money in the same way that movie producers like to hand out “Executive Producer” credits to people who bring money to the project.

Rhine Seymore, a profane, chain-smoking, whiskey-guzzling journeyman who never really liked me but happened to be my first editor, would have said, “We don’t pay you to be Ernest Hemingway.”

I guess the three-person writing teams at the Times would say, “You don’t?????”