My Pilot’s Nickname Is “Bottom Gun” 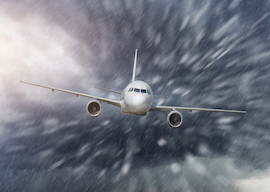 WILLIAMSBURG, Va.—I have this strong suspicion that the airlines are lying to us every time they say, “We have some weather ahead.”

“Some weather ahead” means…a rainstorm.

There’s no need to turn back.

Didn’t America invent the airplane? Haven’t we had 116 years to figure out how to fly through a rainstorm? Don’t they have guys at Boeing running weather algorithms on the aerodynamics of pushing through a Category 5 hurricane with military cargo planes because the fate of the Western world might depend on it?

I have a little app on my phone that tells me all the flights I’ve taken this year. Its purpose is to keep track of frequent flyer miles, but I’m gonna use it right now to establish my credentials for discussing the issue of Wimp Pilots or, what is more likely, Wimp Airline Executives.

I would say about a third of those flights have been delayed, canceled (meaning I was supposed to take a previous flight), or diverted. Eighty percent of the time the reason is “a weather event.” The other 20 percent involve late-arriving aircraft, late-arriving crews—no doubt due to other “weather events” in other parts of the country—or mind-boggling excuses like the time the pilot said he had too much fuel in the right tank and too little fuel in his left tank (causing a 30-minute delay to “balance the tanks”), or the time the compartment holding the oxygen masks fell on my head. I had to refuse medical attention eight times because it was just a bump on the head, it didn’t break the skin, so I kept saying, “Naw, let’s go, you can make me happy by taking off”—but we couldn’t go because a maintenance guy had to come on board and pound the metal back up into the ceiling while listening to me say, “Duct tape, man, duct tape,” and then we had to wait even longer for some dude to fill out an official report on the Man Beaned By Overhead Compartment/Refused Medical Attention.

But here’s the thing. Whenever I do get to my destination, I say to my host/handler/driver, “Sorry I’m late, it was due to all the bad weather here.”

“Haven’t we had 116 years to figure out how to fly through a rainstorm?”

The next day I search in vain for the headline-generating “weather event” that caused us to (a) sit on the tarmac, (b) return to the gate, (c) divert to another airport, (d) exit the plane so we can be bused to “a more relaxing space for waiting,” or (e) all of the above. Meanwhile I hunt for the photos of downed tree limbs and power lines, demolished homes and dead farm animals, the detritus of the previous day’s horrific massively dangerous mother of a superstorm that endangered aircraft all over a third of the country.

There was no weather event.

I know what you’re gonna say. “Maybe the bad weather was higher up in the stratosphere so that ground-dwellers didn’t notice it.” But I don’t think so because we’re cruising all over the place up there in the stratosphere, vectoring, circling, diverting, and eventually “landing in an effort to save fuel.” They always scare you with the “run out of fuel” scenario.

Last Thursday I was on a two-hour flight that lasted 10 hours. The plane was supposed to fly from Liberty International Airport in Newark to Douglas International Airport in Charlotte, where I would presumably connect to my little tree-topper flight to Richmond. By the way, those Last Stop Airlines that fly the final 200 miles of your journey, the ones that fly to Harrisburg and Fort Smith and Sioux Falls—they use Bombardier and Embraer planes that were originally designed as corporate jets. I gotta think those things are made for plowing through the weather no matter how crazy violent the wind bumps get.

Here’s the short version of my journey:

“We’re in a holding pattern because of weather in Charlotte.”

“We’re diverting to Knoxville, Tennessee, due to the weather.”

“We’re going to taxi to the end of the runway so we’ll be ready to go as soon as the weather clears in Charlotte.”

“We’re going to bring some stairs up to the front door so the passengers who want to leave can do so, but unfortunately we have to wait for a manager to drive to the airport.”

“Thank you to our wonderful flight attendants for going into the terminal and finding some additional food.”

(He was using the word “food” metaphorically. It was Doritos and Grandma’s Vanilla Crème Cookies. I don’t like to criticize the elderly, but Grandma can’t bake.)

“Please return to your seats and fasten your seat belts. Flight attendants, prepare for takeoff. We’re only 40 minutes away from Charlotte.”

“We have a ground hold from Charlotte. It will be another hour. We are returning to our parking spot.”

“Charlotte has reinstituted the ground hold. It will be at least another 45 minutes.”

“We are going to open the door one more time for those passengers who have found alternative transportation.”

“All right, we are finally cleared for takeoff.”

“Most of the weather has cleared, so a few of you should be able to connect to late flights.”

“We’re going to hold here on the tarmac because there is no available gate for us.”

Meanwhile my little app on the phone is rebooking my connecting flight, over and over again—until the final plane to Richmond has been…canceled.

The clear skies notwithstanding, the last flight to Richmond was canceled.

This leads to the following conversation:

“You need to comp a hotel for me.”

“We don’t comp hotels when the cancellation is caused by weather.”

“The cancellation wasn’t caused by weather. It was announced after the weather had cleared.”

“I would imagine they need that plane for a morning flight out of here.”

“That’s still not a weather reason. That’s a logistical reason.”

Followed by booking a hotel, Ubering to that hotel, being turned away because the confirmation was in error, Ubering to a second hotel, trying to track the progress of my luggage on the app (impossible), and—oh yeah—maneuvering the next morning through 3,000 Boy Scouts—yes, 3,000, that wasn’t a typo—on their way home from the World Jamboree in Mount Hope, West Virginia.

I ended up in Norfolk, Virginia. My luggage ended up in Richmond, Virginia. Through a very complicated series of maneuvers, we were reunited in Williamsburg, Virginia, where I pulled together a show.

All because of a “weather event.”

The late Herb Kelleher, founder of Southwest Airlines, whose pioneering use of the 737 was the subject of my obituary earlier this year, had a rule for his pilots: Wheels up on time, wheels down on time. You saw the turbulence coming and you flew through the turbulence. Of course, all the pilots he hired from the Navy and the Air Force would know that already because they had thousands of missions in horrendous weather with ridiculous landing situations. When the winds are 20 knots and the aircraft carrier is bobbing in 30-foot seas, you still keep the plane right-side up and get the fucking wheels down. They know how to do this.

Or they used to. It occurred to me during my 10 hours of dead time that I can’t remember the last time I flew through a really heavy thunderstorm, the kind that creates 30-foot drops and rattles the wings. I used to experience that all the time as various proficient pilots would get the wheels up and get the wheels down. When did they stop doing that? I would really like to know. Beat me up, twirl me around, give me that weightless feeling when the bottom drops out, just don’t cancel flights for thunderstorms that don’t even register on the USA Today weather map. Are our American aircraft—made by the same companies that supply our military fleet—really that flimsy? Is this why we sometimes end up flying on aircraft manufactured by Airbus? They make those in France.

The Wright brothers are ashamed of us.