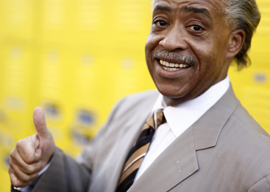 It was a tough week for racial witch hunters. In fact, it’s been a tough quarter-century for them. Reality keeps knocking the liberal media off its high horse. When they picked up the Trayvon Martin case, hordes of TV dupes donned hoods and said they, too, were all young black kids being murdered by racist vigilantes. Then we find out Zimmerman is some kind of Peruvian Jew and may have had his ass kicked by Trayvon before the shooting, so they drop it. They wanted Dharun Ravi to go jail for ten years for the hate crime of pranking his roommate, but the evidence left him serving 30 days for “colossal insensitivity.” When blacks are randomly assassinated in Oklahoma, the left quickly goes mute when they discover one of the shooters is Cherokee.

When a white couple is raped and dismembered in Knoxville, the media is suddenly deaf, dumb, and blind. When children get gang-raped but the bad guys are Muslim, even the police won”t touch it.

This kind of naivetÃ© would be laughable if it wasn”t so deadly. In Louisiana, the Jena 6 were duped into pulverizing a kid based on a noose incident the media wrongly determined was about race. This fake story had a domino effect and years later we”re left with jail time and lawsuits. Countless violent attacks were committed on behalf of Trayvon, at least two of which left their victims (Dallas Watts and Matthew Owens) comatose.

“When you create a victim culture, you also create a vacuum where opportunistic parasites volunteer to fill the role and reap the rewards.”

Here are ten examples of fabricated “hate crimes” that fuck it up for those of us living in the real world.

1. “KKK,” “NIGGER,” AND “BITCH” SCRAWLED ON BLACK VICTIM’s TORSO
In 1987 Tawana Brawley claimed to have been abducted and raped by white cops, who left her to die in the garbage. She said epithets were written on her body upside down in a black substance that resembled charcoal. Brawley was sued for making up the story. She subsequently converted to Islam.

2. SWASTIKA PAINTED ON TALK-SHOW HOST’s FOREHEAD
In 1989, Morton Downey, Jr. claimed that Nazi skinheads painted a swastika on his forehead in an airport bathroom. Then people noticed the swastika was backwards, which is how it would be drawn if you did it yourself in front of a mirror.

3. SWASTIKA AND “BURN NIGGER BURN” SPRAY-PAINTED ON CRIPPLED BLACK LESBIAN CANCER VICTIM’s HOUSE
A cancer-stricken black lesbian in a wheelchair was subjected to the visceral hatred of some stranger who spray-painted “Burn Nigger Burn” on her house. Police got suspicious and installed a surveillance camera, which revealed said black lesbian lighting a cross on fire. She also wasn”t handicapped and had even shaved her eyebrows to try and convince people she was undergoing chemo.

4. ANOTHER BLACK MAN DRAGGED BEHIND A TRUCK
In 1998, the same year James Byrd was dragged behind a truck, a black drug dealer named Cornelius Weaver said the same thing happened to him. It was investigated as a hate crime until Weaver was forced to admit his wounds were the result of getting the shit kicked out of him in a drug deal gone wrong.

5. RACIST HATE LETTERS SENT TO BLACK STUDENTS
In 2005, Alicia Hardin convinced authorities that racists were sending hate mail to nonwhite kids in her class. The Chicago school got so spooked, they relocated minority students to a motel. Alicia was sent to jail for sending the letters herself.