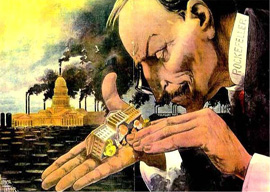 Have you noticed a strange undertone of snark on 60 Minutes every time they feature an entrepreneur? When Lesley Stahl interviewed the founder of Groupon last week, she felt the need to needle him with, “Here’s some of the adjectives that were used to describe you….Thin-skinned, impetuous, and childish.”

Conversely, they grovel at the feet of pompous bureaucrats. When they interviewed the head of the IMF, they came up with lines such as: “The IMF…sits on a fund of $842 billion. But that’s not nearly enough….”

This represents a deep divide in the American psyche. The right sees entrepreneurs as job machines who create wealth for everyone, and they view the government as a parasite thwarting both rich and poor. The left, in turn, portrays entrepreneurs as the parasites. In this instance, the left is wrong and I think it’s because they don’t understand the pie analogy. They think a rich person has taken more than his slice of the pie, which leaves less for the rest of us. They didn’t take math in college and don’t understand that “greedy” entrepreneurs keep creating more pies. While the left scoffs at the idea of more than one pie, they have no problem with Obama trying to synthesize the process by printing more money. They don’t mind the government having infinite cash, but when it comes to an individual having money to burn, they’d rather torch it all.

“Big Business and Big Government, who still haven’t officially announced that they’re married, have been seeking to get even bigger lately.”

Big Business and Big Government, who still haven’t officially announced that they’re married, have been seeking to get even bigger lately. They’d been trying to push a bill called SOPA—the Stop Online Piracy Act—that empowered Wall Street and the White House to decide who gets to do what on the Internet. But the Big Biz/Big Guv tag-team wrestling duo suffered a smackdown. In protest of SOPA, huge sites such as Wikipedia blacked themselves out for a day on January 18th.

In retaliation, the Justice Department chose the wealthy but charisma-challenged Kim Dotcom (né Kim Schmitz, AKA Kimble, AKA Kim Tim Jim Vestor) to represent all that is evil about Internet piracy on January 19th. Cooperating with the FBI, authorities in New Zealand invaded his home, confiscated his belongings, and threw him in jail a day after the SOPA blackout. He was deemed a flight risk and is still incarcerated.

Upping the ante after the feds shut down Dotcom’s site Megaupload, the online “global brain” that calls itself Anonymous hacked an array of government and corporate websites.

The escalating antics mirrored Dotcom’s countersuit from December after Universal Music Group tried preventing him from using their artists to promote his file-sharing software. UMG claimed they had the right to prevent rappers on their roster from promoting certain brands, and Dotcom sued them for lying. UMG lost, and after seeing the groundswell of support the anti-SOPA movement got, it looks like Big Business and Big Government are going to lose again. I hope.

Again, we have two sides: Us and Them. The other side says Megaupload cost Hollywood and record companies hundreds of millions of dollars by allowing users to send each other copyrighted content. Megaupload had a reported 50 million unique visitors a day and was responsible for an estimated 1% of all Internet traffic in North America. (Kim Dotcom himself bragged that it was 4%.) That’s a lot of data and a lot of profits.