My Dinner With Vilfredo Pareto 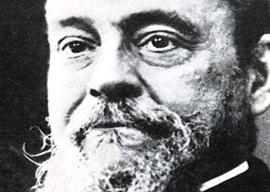 My list of historical personages I”d invite to a dinner party doesn’t include any of the obvious choices. Who really wants to eat dinner with Genghis Khan or Julius Caesar? They’d probably make beetle brows at each other and have atrocious table manners. These sort of lists often include famed politicians. I have no idea why: Your average pork-belly trader has more interesting things to say than a politician from any era. I’ve also worked with famous scientists and don”t consider them suitable dinner guests. While a few are OK, most of them smell funny, talk to their shoes, and eat with their mouths open. My hypothetical historical dinner party would be long on gentlemen”deep thinkers who were admirable as men. Admirable men are not presently in fashion: Only famous ones are, so a lot of my historical dinner-party companions are on the obscure side. High on my list would be Vilfredo Pareto (1848-1923).

Vilfredo Pareto was arguably the greatest economist of the 1800s and possibly the greatest social scientist of all time. He was one of the first to suggest applying the cold hand of mathematics to what was previously a liberal art rather than a mathematical science. His work is still considered controversial today, despite the fact that it is self-evidently true, mostly because the average modern economist or sociologist is more an ideological fashion victim than an applied mathematician.

Pareto was born to Genoese nobility in Paris during the revolution of 1848. His training was in classics, physics, and engineering, so his approach to the soft sciences was more rigorous than most. Not only did he make immortal contributions to economics, but his theories of elites were enormously influential in sociology back when it still had some hope of becoming a hard science rather than the incoherent booby hatch it is today.

“Like most academic types then and now, Pareto started out a sort of liberal socialist. Then he got sick of trying to save others.”

Like most academic types then and now, Pareto started out a sort of liberal socialist. Then he got sick of trying to save others. To paraphrase what he said of his transformation, he had once wanted to protect the underdogs but later became contemptuous of their infirmity. Pareto also explicitly realized the socialist or democratic revolutionaries were just another would-be elite trying to replace the natural elite rather than friends to the common man as they postured themselves. This was a common transformation in his day. You can read a similar evolution in Jack London’s “Martin Eden,” as London fell under the spell of thinkers such as Herbert Spencer (and, probably, Pareto).

Pareto had a sharp pen, which he turned against anti-Semitism during the Dreyfus affair, the Italian royal family’s corruptions, Marxists (his books apparently gave Lenin hives), oligarchs, and later against democrats and socialists. Pareto also wielded a sharp sword and was a crack shot with a pistol. In a time when an insult could lead to a duel and premature death, he was able to defend his words and honor with his skill at arms.

Here is a Pareto quote I often think of when paleocons bemoan the end of the old American order:

Any elite which is not prepared to join in battle to defend its position is in full decadence, and all that is left to it is to give way to another elite having the virile qualities it lacks….The knife of the guillotine was being sharpened in the shadows when, at the end of the eighteenth century, the ruling classes in France were engrossed in developing their “sensibility.” This idle and frivolous society, living like a parasite off the country, discoursed at its elegant supper parties of delivering the world from superstition and of crushing l’InfÃ¢me, all unsuspecting that it was itself going to be crushed.