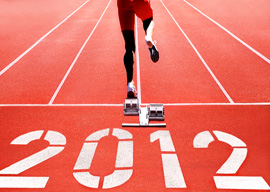 This time I”m going to answer random questions about the Olympics that I”ve made up, allowing me to speculate irresponsibly.

Q. Should Michael Phelps retire from swimming forever?
A. He’s earned a few years on the golf course. Still, come January 2016 he should get back in the pool and start training for a single event: the 50-meter freestyle. You don”t have to be young and aerobically fine-tuned to swim the 50. You just have to show up and be fast for 21 seconds. If Phelps entered just one event in Rio, would you watch? Of course you would.

Q. Is there a lot of diversity among top 100-meter-dash runners?
A. Sure”in height. At 6″5″, Usain Bolt is 17 inches taller than the 5″0″ Shelly-Ann Fraser-Pryce. But there’s negligible diversity in ancestry. Every single one of the last 64 men to make the finals of the Olympic 100, from 1984 through 2012, has had substantial genealogical roots in the Western half of Africa.

Q. Why are so many American track and field stars, such as Galen Rupp (who became the first American in 48 years to win a medal in the 10,000-meter run) and Ashton Eaton (who set the new decathlon world record at the US Olympic Trials), from Oregon?
A. Oregon’s mild weather is good for distance running, and Nike, founded by University of Oregon track coach Bill Bowerman and his former runner Phil Knight, pours a lot of money into keeping the sport alive locally.

“I”m going to answer random questions about the Olympics that I”ve made up, allowing me to speculate irresponsibly.”

But mostly, Oregonians are the last Americans to care deeply about the sport. Track and field is an excellent sport to read about in the newspaper, but it doesn”t televise well (especially not the field events) and is thus fading. Moreover, its heavily numeric appeal attracts the nerdier sort of white and Japanese fans, but most of the champion runners are of West African (sprint) or East African (distance) background. In 21st-century America, distance running interests mostly white people, a few Mexicans, and a tiny number of East African immigrants.

Q. Why do so many famous decathletes/heptathletes, such as Jessica Ennis, Ashton Eaton, Bryan Clay, Dan O”Brien, and Daley Thompson, have one black parent and one nonblack parent?
A. The nature reason is likely that these “world’s greatest athlete” tests (decathlon for men, heptathlon for women) are conducive to people who happened to inherit an unusually wide array of genes, suiting them for events that most people find contradictory. The nurture reason is that black culture has largely lost interest in track and field (especially field), so decathletes tend to come out of mostly nonblack milieus. For example, Eaton was raised by his white mom in a small Oregon town.

Q. Why is heptathlon gold medalist Jessica Ennis, “the face of the London Games,” such a big deal to British corporate advertisers?
The Telegraph reported:

Like Lewis Hamilton in Formula 1, she had the look the sponsors wanted in a country where increasing numbers of us have parents with different racial backgrounds. Research has shown that the face the majority of people of all ages find most attractive is symmetrical, flawless, and mixed race.

But not too mixed”for a woman, it helps to have plausibly blonde hair.

Q. Did Galen Rupp, the first American in 48 years to win a medal in the 10,000-meter run, smash stereotypes?
A. His coach Alberto Salazar says he thinks so.