My Superjumbo Bad Time on the A380 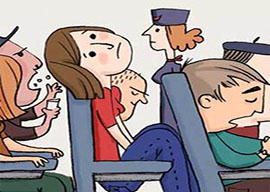 My first practical observation about the A380 Superjumbo:

It isn”t all that big.

Once you get inside it and have crouched your way claustrophobically through the economy-class cabin toward seat 89F, you soon realize that it’s no bigger than a Boeing 747. The only reason it can carry 555 people (or 853 in an all-economy configuration) is because it’s essentially one 747 stacked on top of another 747. Genius! In my naÃ¯vetÃ©, I had assumed that economy class on such an outwardly gross airplane might equate to, say, World Traveller Plus class on British Airways (i.e., more legroom, more comfortable seats), but the seating arrangement’s exactly the same as it always has been: three nearest the windows and four across the middle. Sadly, the Airbus designers haven”t rectified the problem facing many a misanthropic economy-class passenger”that of having to make close-proximity small talk for fourteen straight hours with the most boring person you”ve met in your life. Nor have they rectified the problem of finding yourself”as I did on my trip from London to Sydney on Singapore Airlines”squashed and arm-restless between a proud and enormous Nigerian grandmother on one side and a vicious trailer-trash mother of two squealing infants on the other. My last-minute plea to the woman at the check-in desk to give me a window seat had clearly fallen on deaf ears.

“Sadly, the Airbus designers haven”t rectified the problem facing many a misanthropic economy-class passenger”that of having to make close-proximity small talk for fourteen straight hours with the most boring person you”ve met in your life.”

Once the lights dimmed and I plugged into the flight’s entertainment system and was on about my third double Scotch on the rocks and had that warm feeling in my chest, I started thinking, “Oh, well, maybe it’s not so bad after all.” Then suddenly the wiry and terrifically strong old man in front of me reclined his seat with what seemed to be premeditated and unmerited aggression, and the 10×5-centimeter screen rammed itself against my forehead very painfully and with a dull cracking sound. My flight was immediately ruined. For the next twelve hours. The logical thing would have been to inflict the same punishment on the person behind me, but I didn”t have the heart to do it. I never do. I just sat there in a state of homicidal/suicidal rage with my knees pinned tightly to my chest while the screen flickered, hummed, and gently massaged my aching brow.

Wary of acquiring deep-vein thrombosis, and having promised my mother that I would “walk around a lot,” “not drink any alcohol,” and “drink lots of water,” I finished my fifth Scotch on the rocks, did a remarkably accomplished slow-motion pole vault over my Nigerian neighbor, walked around in the darkness for a bit, drank a quick cup of water, placed another order for a double Scotch on the rocks, and returned sheepishly to my seat.