Myth of the Effeminate Poet 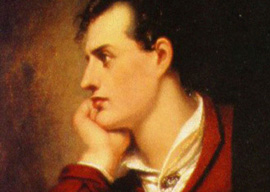 This year was the first time a homosexual poet performed at the Presidential Inauguration. (Not well, one might add.) That may be a shock since all poetry is supposedly written by stereotypically sensitive gays. Reinforcing the point, Richard Blanco was immediately interviewed by none other than Anderson Cooper, though had anyone predicted so before the fact it would have been classified as “hate speech.”

Yet contrary to the contemporary archetype, poets have throughout the ages been far more inclined toward the love of woman. Often this idealization has taken the form of many women.

Perhaps the best (and worst) said of Lord Byron was by Lady Caroline Lamb, who described him as “Mad, bad, and dangerous to know.” Most romantic of the Romantics, there was reason for warning.

He inherited a Barony at age ten, confessed sexual feelings (perhaps consummated) for his Scotch nurse at eleven, likely had a child with his half-sister, drove the aforementioned Lamb to near-madness, married her cousin, had children out of wedlock, had several more highborn lovers, and had a penchant for keeping locks of their pubic hair as souvenirs.

“By and large, composers of verse were historically more virile, obsessively passionate, and hopelessly infatuated with the fairer sex.”

Byron ultimately died not at the hands of a jealous mistress but in Greece, fighting for independence. Since that time there has been occasional speculation about his sexuality, though like most modern “scholarship,” it’s largely distinguished by lack of evidence and based on wishful thinking.

Percy Shelley is often regarded as the finest English lyricist. He is also a fine example of the ribald poet: being expelled from school, eloping with a teenager when she threatened suicide, leaving her for the brilliant Mary (who also threatened suicide if she couldn’t have him), adopting a child which may have been his illegitimate spawn, and finally drowning at sea.

Following his demise Mary Shelley began a determined campaign that Percy not be lost to posterity and collected his “Posthumous Poems.” When Shelley’s father threatened he’d discontinue her allowance, Mary was forced to remove the book from circulation. Yet the devotion her deceased husband evoked was such that two decades later she began again to publish these works to secure his fame.

Robert Browning is a favorite even aside from poetry. A literary force in his own right, he was inspiration for the immortal words, “How do I love thee? Let me count the ways.” Yet it was not mere phraseology. His muse Elizabeth Barrett was a sickly woman for whom death a constant companion.

Ward of a tyrannical father and near-prisoner in her own home, she had limited contact with the world. One of the few ways she could interact was by letter and in this manner Browning introduced himself and seduced her. Upon discovery and being forbidden further correspondence Browning did the next best thing“he abducted a willing Barrett to Florence, where they lived happily ever after.

Ezra Pound was a firebrand out of the gate. He failed to finish his first year teaching college after being booted for having an actress spend the night in his rooms. Next Pound headed to Europe where he associated with or mentored everyone from Yeats to Hemingway (who betrayed everyone who ever helped him become more than a second-rate ambulance driver).