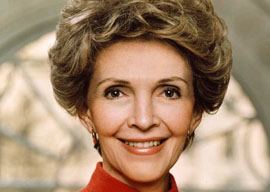 In its never-ending search for scapegoats, the left has decided that Nancy Reagan bears full responsibility for her husband’s response to the AIDS crisis (apparently, attacking first ladies is totally cool as long as their name isn”t Michelle Obama). With a pace that probably rivaled the speed of rigor mortis in the late first lady’s body, leftists reacted to the news of Reagan’s death by gleefully jumping online to disparage her as a monster who could have compelled her husband to cure AIDS…if only she”d cared.

The left’s argument is fueled primarily by the exact kind of “gender stereotyping” it supposedly abhors (“Nancy was a woman, and therefore a caring nurturer who should have been sympathetic to the sick and the dying”). Also at play is the fact that in 1985, Rock Hudson, in the final stages of full-blown AIDS, had his publicist send a telegram to the White House pleading for official intervention: “Commanding general of Percy Hospital has turned down Rock Hudson as a patient because he is not French. Doctor Dormant in Paris believes a request from the White House or a high American official would change his mind.” Mark Weinberg, deputy press secretary and special assistant to the president, told Mrs. Reagan that the matter should be referred to the U.S. Embassy in Paris. She agreed, and it was.

Amazingly, leftists seem to have no problem with the fact that the French hospital refused to admit Hudson because he was a foreigner. Rather, they reserve their fury for Nancy, who, they claim, should have acted outside normal channels on Hudson’s behalf. These are, of course, the same leftists who”d surely use that against her had she done so (“as ordinary gay Americans lay dying in the street, “Empress Nancy” bypassed protocol to get special treatment for her movie-star friend!”).

“From the earliest days of the epidemic, a vocal, hardcore group of North American gay advocates refused to admit that there was an epidemic.”

For LGBTQIA alphabet-soupers, attacking the Reagans for not “doing more” about AIDS in the early 1980s is revisionist history”the bad kind”aimed at covering up the record of gays during those very same years. There’s no question that at the beginning of the AIDS epidemic, politicians in general (not just those within the Reagan administration) didn”t give the then-localized outbreak of “gay cancer” the DEFCON 1 treatment. But let’s be fair. Ask any leftist of the Bernie Sanders generation why FDR, a supposed god among men, didn”t enact sweeping racial desegregation reforms during his administration, and without question you”ll receive the standard answer: Roosevelt was too busy dealing with the Depression, the Japs, and the Krauts to spend time on “black issues.” Oh, his heart was with those poor, suffering darkies, to be sure…Marian Anderson and such. But priorities, old chap! Blacks would just have to suffer another decade or two before the next bwana could free up the time to help them.

President Reagan certainly did have a few things on his plate in 1981 and “82. The Soviet-escalated Cold War, the Carter recession, and getting shot and nearly dying made “the gay cancer” seem like something that could briefly be put on the back burner. But that’s a matter of opinion. What is not a matter of opinion, what’s a matter of record, is how some gays viewed AIDS in those same years.

From the earliest days of the epidemic, a vocal, hardcore group of North American gay advocates refused to admit that there was an epidemic. In fact, a widely held belief was that the “gay cancer” was a hoax being spread by homophobes in order to stop gays from enjoying themselves. “The Gay Cancer scare: If fear of the dreaded disease has stopped you from having sex lately, then the corporate media have put one over on you again,” proclaimed the influential gay-rights publication The Body Politic (ranked the 17th-most influential magazine in Canadian publishing history) in October 1981. According to the editors of that esteemed publication, the “gay cancer” was getting more publicity than it should, and more money than needed:

Undoubtedly the factors which lead a small number of gay men to develop Kaposi’s sarcoma will eventually be isolated”with or without gay-financed research. The competition among medical researchers for recognition in the “war against cancer” will see to that. In the meantime, we must endure the publicity which sensationalizes another “gay disease,” knowing that if the 26 men with KS had been kidney transplant recipients instead of gay men, no articles would have appeared in the “New York Times” or the “Globe and Mail,” no special funds would have been set up to gather our money, and no claims would be made that the disease will solve the mysteries of cancer.

The claim that the new gay disease wasn”t real, that it was a conspiracy to prevent gay sex, had a direct effect on the actions of GaÃ«tan Dugas, the gay North American flight attendant known (rightly or wrongly) as “patient zero.” According to Richard McKay in the spring 2014 Bulletin of the History of Medicine, in 1982 Dugas rejected doctors” claims that he was spreading a fatal disease in part because of statements like this one from gay activist Michael Lynch:

Gays are once again allowing the medical profession to define, restrict, pathologize us…. The American Psychiatric Association may have given us all an instant cure in 1974 when they took “homosexuality” off the list of mental diseases, but now the MDs of the land have placed us on their agenda, and no one, so far, seems to be resisting them.

According to McKay, calls for “resistance” to the “gay cancer hoax” were so commonplace in the gay community at the time, there’s no way they couldn”t have influenced Dugas” reckless behavior. It should be noted that post”Cold War research has exposed the fact that the Soviets (you know, the “good guys” in the Cold War, according to the Bernie Sanders crowd) were purposely spreading AIDS conspiracy disinformation in order to hinder U.S. efforts to control the disease.

Even after the gay community came around to accepting the reality of AIDS, the response was often not one of “we must stop the disease,” but rather “we must protect our privacy so “they” don”t oppress us.” The conspiracy paranoia had merely shifted with events. The supposed cabal of enemies of the gay lifestyle had previously been accused of lying about the existence of AIDS. But now that AIDS was an accepted reality, the “cabal” was this time accused of using the deadly disease to force gay men “out” so that they could be sent to death camps or otherwise prevented from boning freely. According to Dr. Craig Keyes, a gay physician in New York in the 1980s, “legendary” AIDS activist Larry Kramer saw the vast conspiracy everywhere, even at medical clinics set up to help the community: “Larry was just so angry at anybody who was working within any kind of infrastructure. He would come into the clinic and just start screaming at us because we were part of the federal health system and don”t you know Reagan is trying to kill everybody.”

Soon enough, the paranoia led to the notion that “privacy” was a more important goal in the fight against AIDS than stopping the disease. “A segment of the gay community was more concerned with civil rights than staying alive,” wrote Susan King in the L.A. Times. And this paranoia was putting more than just gay lives at stake. According to a 1995 Harvard Law School paper titled “The Inadequate Response of the FDA to the Crisis of AIDS in the Blood Supply,”