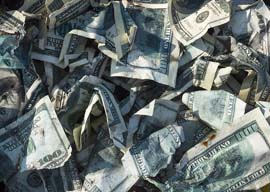 “Narco money is the foundation of the modern financial system.”

These are the words of Viktor Ivanov, head of the Federal Drug Control Service of Russia. In a speech given in Moscow in 2014, he pointed the finger at Operation Enduring Freedom (the banner for the U.S.-led global war on terror), blaming this military operation for the “transformation of Afghanistan into a planetary-scale zone of drug production” that drove a 40-fold increase in heroin production between 2001 and 2013, as recorded by the U.N. Under the Taliban, the area devoted to opium-poppy cultivation had dwindled from 63,000 hectares to just 8,000 ha. from 1998 to 2001, an eight-fold decline. Operation Enduring succeeded in ousting the Taliban, but by 2013 Afghanistan’s opium-cultivating territory grew by 26 times, reaching a record 209,000. With 3 million farmers now growing poppies on an industrial scale, it’s clear the free-market global economy allows the drug business to flourish. To Viktor Ivanov, the thriving opiate business”which produces approximately 550 tons of heroin in the Afghan region alone, a “planetary”-size quantity”represents “the flip-side of the global economic crisis.” (By contrast, South America produces 950 tons of cocaine annually.)

To what extent does the drug business stimulate the free-market economy? A major beneficiary of this business is naturally the banking sector. According to VICE Motherboard, “a yearlong investigation by the US Senate’s Permanent Subcommittee on Investigations concluded that over a two-year span HSBC Mexico transferred $7 billion in narco funds.” The penalties the bank paid totaled £1.9 billion, equivalent to 10% of its pretax profits; a so-called “parking ticket.” No HSBC executives were charged with a crime thanks to a special settlement called a “deferred prosecution agreement.” The HSBC whistle-blower Everett Scott revealed how HSBC, the world’s largest non-Chinese bank, proactively protected narco money transfers in the open. They did so partly by hiring uneducated, unqualified “debt collectors” with zero money-laundering experience to staff their Anti-Money Laundering (AML) bureaus. HSBC employees were incentivized into intercepting and altering wire-statement details that might trigger AML alerts. Clerks would literally add dashes to the digits in suspicious numerical sequences in order to blur and evade auto-detection. When an alert was triggered, they were responsible for removing the offending trigger points as quickly as possible, to avoid alerts leading to investigations. The management’s objective was to make AML alerts as infrequent as possible so their VIP clients remained undisturbed and happy customers.

“Why is the law so lenient with bank employees who admit to drug-related crimes when jails are (half) filled with drug offenders?”

In a famous New York Times op-ed from 2013, Robert Mazur”a former undercover money launderer with 27 years” experience”drew attention to the banks” complicity in laundering terrorist or narco funds, a problem that has attracted comparatively little press. “Banks themselves don”t launder money, after all; people do,” said Mazur. He iterated the standard proof required to convict a bank officer of money laundering: “If the person knows that funds are proceeds of a crime and…attempts to disguise or conceal the true source of the funds, he has committed [a] criminal offense.” Meaning HSBC was caught red-handed.

Why is the law so lenient with bank employees who admit to drug-related crimes when jails are (half) filled with drug offenders? 46.5% of the U.S. prison population are currently incarcerated for drug offenses”the leading crime by a multiple of three”costing taxpayers $18.14 billion annually (to hold drug offenders alone). And yet the banker is as much an accessory to narco commerce as the drug seller? Only, a seller moves $10 or $50 bags whereas HSBC admits to transferring $881 million for various cartels.

What can you do when everybody’s at it? The following banks have admitted to the same crime: Citibank, ING, Bank of America (Merrill Lynch), Wachovia (Wells Fargo), American Express, Union Bank of California, Lloyds (U.K.), Credit Suisse, ABN Amro, Barclays, and Standard Chartered. U.S. court filings post-2006 show “the Justice Department has signed similar agreements [to HSBC’s], withholding prosecution in exchange for bank promises to tighten oversight” with most of the banks listed.

Last year The Independent claimed that London has become the world’s money-laundering center for the drug trade. The U.K. National Crime Agency stated: “We assess that hundreds of billions of US dollars of criminal money almost certainly continue to be laundered through UK banks, including their subsidiaries, each year.” One imagines the in- and outflows of hundreds of billions of criminal dollars would be difficult to hide? However, the last financial crisis proved to be a perfect moment for the laundering of drug money, proving Ivanov’s point.

In fact, illegal narco monies apparently rescued the banking industry from collapsing due to a calamitous lack of liquidity during the second half of 2008″the so-called “credit crisis.” Banks were so paralyzed they ceased lending to one another. The United Nations Office on Drugs and Crime’s executive director, Antonio Maria Costa, announced in 2009 that he had seen evidence to prove that profits from organized crime were “the only liquid investment capital” available to certain banks on the verge of folding in 2008. Most of $352 billion in drug profits were consequently absorbed into the economic system. Interbank loans were financed by capital derived from the drug trade, and “there were signs that some banks were rescued that way,” said Costa. He declined to identify specific banks but said he received evidence that inspired his claim from prosecutors and intelligence agencies in Italy, Britain, Switzerland, and the U.S. Banking officials deny the claim, attributing the banking sector’s recovery to central bank intervention. However, the time frames don”t match: The first round of U.K. quantitative easing commenced in March 2009, while Costa viewed evidence from July 2008 onward, as The Guardian reported.

Drug gangs traditionally (and currently) preserve much of their wealth in cash, the most vivid example of which was the $207 million cash seizure from meth middleman Zhenli Ye Gon. You may have seen in the media recently, and in the WSJ specifically, that there is a “Plot to Kill the $100 Bill.” The European Central Bank is also mulling the elimination of its “¬500 bill, and former U.S. treasury secretary Larry Summers quoted for The Washington Post a Harvard/Kennedy study that claims large bills are the “preferred payment mechanism of those pursuing illicit activities, given the anonymity and lack of transaction record they offer, and the relative ease with which they can be transported and moved.” According to the same study, only 1% of illicit transactions are seized by authorities”which gives us a glimpse of the scale of illicit trade. So far, only Switzerland plans to keep its largest-denomination note: the CHF 1,000.