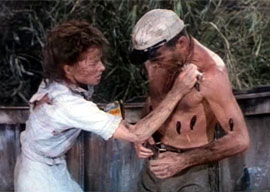 Just as 2011 was the year that no one would shut the hell up about the “99%,” this year’s election season has birthed another obnoxious quotient that refuses to die”the “47%“ of Americans that Mitt Romney reputedly mouth-raped at a fundraiser by claiming that they “are dependent upon government” and “believe that they are victims.”

Barack Obama’s dutiful cliff-divers, rickshaw drivers, and shoeshine boys seized upon this quote as evidence that Romney is out of touch with average Americans”no argument there, but so is Obama”and that it would drive a fatal wooden spike in the bloodsucking Mormon plutocrat’s campaign.

What surprised me about many of those who felt targeted by Romney’s comment is that not only didn”t they shy away from the insult, they embraced it as a matter of pride“a misguided pride, a defensive pride, a dumb pride, sure”but of pride nonetheless.

Leftist rhetorical tacticians have had great success in depicting anyone who believes that individual responsibility is more important than social responsibility”or that wealth should be awarded according to merit rather than need”as a meme-gulping dupe who’s channeling gasoline vapors from oligarch-fueled think tanks. If you so much as suggest that the government may not be the benevolent nanny”or, for many “empowered” women, the alpha daddy”that it pretends to be, you are by default accused of being the blind tool of private-sector corporate propagandists.

“When you ask nothing of people, that’s exactly what you get.”

That may be true for many people, but I ain”t that guy. I”ve arrived at my beliefs from blunt-trauma head injuries after decades spent sitting in detention at the School of Hard Knocks.

Ejected from a red-brick working-class row home at age 19, I have had to work all my life to avoid abject pauperdom, so I bear a lifelong animus for cocooned yuppie progtards who lecture me about the “class war” they quixotically wage inside their soft skulls. And the next pampered poofter who wants to shove “white privilege” down my throat may have some white knuckles shoved down theirs.

Economically I”ve always found myself wedged between the welfare queens and their limo-lib enablers. I”ve never worked a year where I didn”t have to pay federal income taxes, so pardon me ever so much for resenting those who don”t pay them yet expect me to fund their dysfunction, their stupidity, their laziness, and their infantile sense of entitlement. Way too many people these days”possibly even more than 47%”seem dumbed-down and pilled-up.

I”ve always tried to live within my means, mainly because I wouldn”t be able to stand myself if I didn”t. Maybe I’m a unique case, but I suspect I”m not. I”ve taken out one loan in my life”a student loan”and made sure to pay it back in half the time. I never ran up big personal debts, never went on food stamps, and the single time I received unemployment compensation”for 13 weeks, although I could have stretched it out for far longer”I hated the feeling but was somehow able to justify it knowing that I’d paid far more into the system than I was getting back. Still, receiving each puny check felt like chewing on a wet turd.

Although I have my own medical problems, I don”t have health insurance. But neither have I ever felt it was owed to me. I also suspect that if I wasn’t being squeezed by Big Brother to pay for the leeches that feel such things are owed to them, I’d be able to afford it. I”d prefer if they”d never taken my money from me in the first place, but I never had a say in the matter.

Although I”m still an emotional dimwit in many ways, years of experience have given me the rudimentary wisdom to realize the futility of envy, the universality of greed, and that fairness is an entirely subjective concept.