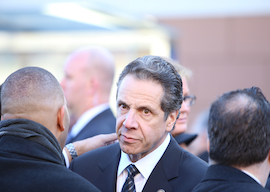 At what point do you call a man a brute?

The governor of New York has reached that point. He is a brute. With less feeling and regret than would follow stepping on a cockroach, the governor has, to the plaudits of those who think as he does, signed into law an edict that brings to mind the city of ancient Carthage, where children were routinely sacrificed to a deity quite unlike the God of the Bible. And, I might add, quite unlike the God of those who framed the Declaration of Independence, which lists the right to life as the first inalienable right.

The new law allows a clinician to kill an unborn child right up to the due date.

Now I must give you the name of the governor, but I would assure you that it is not found in the Book of Life. Which is why, according to Augustine, the Rich Man in Luke 16 is not given a name, and the beggar Lazarus is named. Jesus, who speaks in the passage about the plight of the Rich Man, has His all-knowing eye on the Book of Life; and the Rich Man, who surfeited while the beggar suffered, never made it into a book that is as real as the Gutenberg Bible.

Where can you find the governor’s name?

You will find it on the membership roll of some Catholic Church, which is why upstanding Catholics are calling for his excommunication. But don’t expect that to happen. Archbishop Dolan thinks that would be “counterproductive.”

(I think the Archbishop has been into the Communion wine.)

“My advice to Governor Cuomo is not to ride in a plane. It might be struck with lightning.”

The governor of New York, Andrew Cuomo, has legalized Murder One. And how did this happen? The Republicans, who for ten years resisted this display of bestiality, lost control of the New York legislature. Now you may join me in expressing disgust, but you must admit the governor is consistent. This is the same guy who legalized same-sex marriage. He is a liberal, and liberals are consistently consistent. They wait for their opportunity as many years as it takes and they strike.

The viper can only be a viper.

Cuomo is proof that as far as New York is concerned, conservatives have lost the cultural war. The only thing worse, and waiting just around the corner, is what Princeton’s Peter Singer has been calling for: out-and-out infanticide for children up to 2 years who do not meet their parents’ expectations. Are you surprised to learn that Singer does not believe that “objective moral values exist”? I am wondering, how will this killing of children be done? Will you take the child to a person who specializes in infanticide? Or will there be a kit for doing that sort of thing that you use at home, maybe in the garage or the basement or the shed out back?

A kind of national insanity is now evident when a man like Peter Singer can walk the streets not wearing an ankle bracelet, and even teach at a school founded by the most devout souls to have ever peopled this nation. And this does not bode well for the America we first came to know and love. To be sure, it represents for many of us unwanted change.

I grew up on the streets of the South Bronx. The kids I hung with were not the best sort, and that’s putting it mildly. But as bad and obnoxious as we were, when a woman entered a subway car carrying a baby, and all seats were taken, we immediately gave up our seat to her, especially if she looked as if she was carrying her baby inside of her. Bad as we were, and sometimes just plain evil, we thought that an expectant mother was special—you know, kind of sacred. Little did we know that change was in the making. And such change that Governor Cuomo, with a display of unequaled hubris, lit up the Trade Center in pink to highlight his Carthaginian victory.

We have fallen a long way. The following from Daniel Webster, America’s greatest orator, would now be unthinkable if spoken in Congress.

Finally let us not forget the religious character of our origin…. Our fathers were brought hither by their high veneration for the Christian religion. They journeyed by its light and labored in its hope. They sought to incorporate its principles with the elements of their society and to diffuse its influence through all their institutions, civil, political, or literary. Let us cherish these sentiments, and extend this influence still more widely, in the full conviction that that is the happiest society which partakes in the highest degree of the mild and peaceful spirit of Christianity.

My advice to Governor Cuomo is not to ride in a plane. It might be struck with lightning. But that, on the part of the angels, would be an act of mercy. Because we know of someone just like him who launched a similar attack on children in Bethlehem, only to die years later with a rotting body so putrid and vile he had to employ servants to cover him in perfumes so that people could attend his funeral. It is not good to attack the most defenseless in our community.

So what will liberals say if lightning strikes the governor’s plane? They will prove consistent and say it was just a coincidence.

But I am not worried about the governor. My concern is for the people of New York, because of an idea John Calvin wrote into history one day; an idea he fully embraced, believing it to be a truth.

“When God wants to judge a people He gives them wicked rulers.”