Nationalism Is a Blast 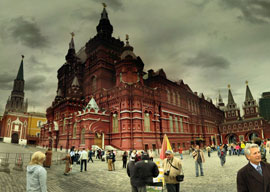 On this 100th anniversary of the Great War, the rise of anti-Russian jingoism in the American media is apparent to both the right and the left. In The Nation, NYU Russian Studies professor Stephen F. Cohen lamented about the press’s run-up to the Sochi Winter Games:

American media on Russia today are less objective, less balanced, more conformist and scarcely less ideological than when they covered Soviet Russia during the Cold War.

The word “jingo” goes back to a popular 1878 English music-hall song of anti-Russian agitation stemming from Russia’s victory over the Ottoman Empire in the Caucasus and Balkans:

Why the outbreak of jingoism in the Obamaite press?

The Russians today aren’t threatening to take Istanbul or anywhere else of strategic importance. They are no longer building a tank armada to punch through to the Rhine or the Persian Gulf. Instead, they’re spending their loot on ski lifts and figure-skating rinks.

The US spends something under an order of magnitude more on its military than Russia does. Moreover, the US has been encircling Russia politically and spending $5 billion over the decades buying friends in neighboring Ukraine, where the State Department’s Victoria Nuland is currently attempting to overthrow the elected government.

“Massive immigration keeps being rejected whenever publics around the world are allowed to vote on it.”

The Russians, lacking all natural defenses to the West, are sensitive to the proximity of hostile alliances. They believe, with much historical justification, that in February 1990 Secretary of State James Baker and West German leader Helmut Kohl promised Mikhail Gorbachev no Eastern expansion of the NATO military bloc in return for allowing the reunification of Germany by withdrawing the 380,000 Soviet troops from East Germany.

The West has repeatedly violated that gentleman’s agreement, in 2008 even putting Ukraine and Georgia on track for NATO membership. (Georgia’s subsequent invasion of Russian-held South Ossetia proved a major embarrassment, however.)

The US media’s ideological justifications for its anti-Russianism involve gay rights (”World War G”) and democracy (“World War D”). But those concepts don’t appear much in evidence in scenes from central Kiev, where the City Hall of the embattled pro-Russian government had been occupied since December by masked men swinging iron bars. Maybe I’m just stereotyping, but the soccer hooligan Right Sector and Dynamo Kiev ultras who have done much of the fighting against the government”the lads who consider opposition leader Vitali Klitschko, the retired heavyweight champ, a wimp“don’t give off a particularly gay-friendly vibe.

The reality appears to be that Russia simply cares more about buying Ukraine’s loyalty than either the European Union or even Washington does.

Is ideology the cause of the American media’s jingoist attitude toward Russia? Russians are highly philosophical, so they need an ideology or they collapse into depression. Mikhail Gorbachev followed the Chinese communists in perestroika (restructuring) but added glasnost (openness), which quickly delegitimized the Communist Party’s authority. Even the hardline communists who started a coup against Gorbachev in 1991 almost instantly melted into despondent ineffectuality worthy of a Chekhov play.

Putin has recently attempted to furnish his subjects with a conservative nationalist ideology to counter aggressive American globalist liberalism. The ex-KGB man recognizes that liberalism”in the reigning sense of minoritarianism”is suffering from diminishing marginal returns, with ever-tinier minorities the subject of its obsessions, as we see with World War G moving on to World War T. (Of course, globalist liberalism doesn’t seem to actually make countries more equal; indeed, inequality of wealth has exploded during this period of minoritarian triumph.)

Much of the American press’s anger at Russia stems from the feeling that maybe Putin is on to something.

But are historic Russia and globalist America really all that different? Lacking oceans or mountains for protection, the Muscovite state sought survival in endless expansion. Empires, by definition, are multiculturalist.

And the Russian intellectual temperament tends toward messianic universalism rather than particularism. Thus, the most prodigious ideological entrepreneur on the Russian right, Aleksandr Dugin, wants Russia to lead a multiculti rebellion against the “Atlanticists:”

…Islamic movements, Hindu movements, or nationalist movements from all over the world should also be regarded as allies. Hindus, Buddhists, Christians, and pagan identitarians in Europe, America, or Latin America, or other types of cultures, should all form a common front.

But many of Russia’s neighbors, such as those who speak Ukrainian, have persuasive historical reasons to not like Moscow. And that gives America easy ways to stir up trouble for Russia, while Russia can no longer afford to subsidize anti-Americanism in Cuba and other Latin American countries.

Another reason for the anti-Russian agitation is that much of the conflict between Russia and America is ginned up by the US to create diplomatic leverage so it can be traded away for other goals. To adapt the old joke: Why do you pound the other guy’s head into the wall? Because it feels so good to him when you stop.

The US could, say, stop subsidizing the Ukrainian opposition in return for Putin halting arms sales to the government of Syria.