Never Again! (Some Restrictions May Apply) 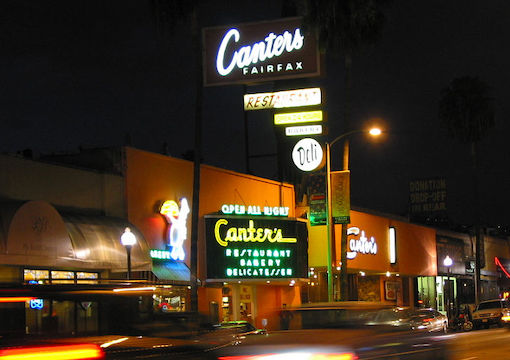 There are certain “firsts” we all remember from youth. Our first kiss. Our first car. Our first time being chased off a college campus by an angry mob of Jews shouting, “Never again!”

Okay, that last one may be unique to me.

See, that’s what happened when I was invited by a student group to speak at UCLA in January 1992. After I was pummeled on stage in front of news cameras, a furious mob of about 200 students, Chabad members, and Jewish activists began chanting, “Never again! Never again!” as I fled like Don Knotts with a hotfoot.

So I take that “never again” crap rather personally. In theory, it’s supposed to be the mating call of the Holocaust-averse Jew, a defiant declaration that we Jews will never again be mistreated and abused as we were under Hitler. And last week the never-againers were in quite a tizzy over a new Holocaust survey sponsored by the Conference on Jewish Material Claims Against Germany, an organization that purports to seek “a small measure of justice for Jewish victims of Nazi persecution” (to clarify, the Conference defines “small” as “massive, disproportionate, and unending”). And what a survey it was! Apparently, most millennials don’t know the number of Jewish Holocaust victims (oy!). Almost half can’t name a single concentration camp (gevalt!). And a whopping 30% of them blame the Holocaust on the United States, FDR, and the Jews themselves, nearly tying the 33% who place the blame on Germany (vey iz mir!).

The survey results were met with so much anguished Jewish garment-rending, it sounded like the earth itself had ripped a fart.

The survey was conducted by Schoen Cooperman, an outfit run by a character named Douglas Schoen who, depending on the source, either donates money to Democrats to infiltrate the party for Republicans or donates to Republicans to infiltrate the party for Democrats. Schoen is, to use the proper clinical term, one shifty-ass mutherfucker, so I take the survey with many grains of kosher salt (I’m reminded that every few decades a bogus Holocaust survey is released to gin up a “never again” frenzy).

Schoen has refused to release a breakdown of the responses by race and ethnicity. Thirty-five percent of the millennial respondents were black or Latino; this is important because black children are conditioned from birth (thanks, ironically, to predominantly Jewish academics) to not care about anything except “black history.” Black students are expected to be ignorant of “the white man’s past.” You wanna interest black kids in the Holocaust? Spin a tale about how crematoriums were invented by a black man named DeBurnham Chard because racist whites barred black corpses from earthen burials.

And Hispanic students taught en español (again, ironically, thanks to predominantly Jewish academics) have probably not been exposed to the same Holocaust texts as English-speakers (sadly, I Survived Hitler’s Ovens by Olga Lengyel has never been translated into Zapotec).

So without the racial/ethnic data, the survey is of limited value (Schoen refused my repeated requests for a detailed black/white/Hispanic breakdown of the results).

Still, the survey has done its job, uniting mainstream left and mainstream right in a common pledge to up the volume on Holocaust education in U.S. schools, because you can’t never again if you don’t never forget.

“‘Never again’ doesn’t apply to pogroms that are perpetrated by the ‘right’ people.”

All the hand-wringing over the survey is based on a fundamental misunderstanding of the problem. A half century of high-decibel Holocaust education hasn’t failed…it’s worked too well. Millennials hate Nazis with the passion of someone actually wronged by Nazis, which is ironic because no millennial has ever met an actual Nazi. Mind you, they think they have. According to the survey, 54% of millennials think the U.S. is crawling with “neo-Nazis.” Where’d they get that impression? Take a guess: from Jews who’ve misused the Holocaust to smear any white who displeases them as a “Nazi.” That 30% of millennials blame the Holocaust on (white) America, (white) FDR, and (huwhite) Jews shows just how well the propaganda has worked. White = Nazi, “full stop.” Sure those kids can’t name an actual concentration camp, but who cares? It was never about that. It was always about smearing non-Nazis as Nazis. It’s not about remembering the genuine Nazi menace of the past, but rather creating a phantom Nazi menace for the present.

To conservatives responding to the Schoen survey by mindlessly repeating, “We need more Holocaust education,” be careful what you wish for. I’d wager that, among American whites, there’s a direct correlation between receiving massive doses of Holocaust education in well-funded suburban schools, with yearly visits to Holocaust museums and in-class lectures by survivors, and a fanatical desire to punch Nazis, which in today’s political climate translates to “punch anyone on the right.” Or any Trump voter. Or any straight white male who doesn’t detest himself.

Holocaust education has always been weaponized. Jews will make a big deal about how appalling it is that millennials can’t name Ravensbrück, Oranienburg, or Gross-Rosen, but it’s insincere outrage. Holocaust ed has panned out exactly as planned. “Never again” is not about looking back, but looking straight ahead, stopping and stomping the present-day “enemies” of a hate-filled Jewish establishment that despises the West, its traditions, and anything white, Christian, or European in origin. I am by no means speaking of all Jews; just the perennially hateful ones. These Jews are as much of a problem for decent Jews as black career criminals are for decent blacks. And just as in the case of blacks, no good comes from pretending the bad element doesn’t exist and doesn’t do harm.

Indeed, the harm done by the spiteful ideologues of the Jewish establishment was never more evident than in the days following the sacking of L.A.’s historically Jewish Fairfax District several months ago.

Nothing better demonstrates the true emptiness of “never again.”

The morning of Saturday, May 30, found Antifa and BLM activists chattering on Twitter about how they were going to target the “Jew areas” of the city. And target they did. Fairfax, the historical heart of old Jewish L.A., was laid to waste as cops stood by and politicians stayed silent. Buildings were destroyed, synagogues defaced, delis and Judaica stores looted. Black BLM thugs broke the windows and did the stealing, while white Antifas added the anti-Jewish graffiti. A nifty partnership.

“Riots and looting in the epicenter of Orthodox Jewish life in LA.,” read the headline in Haaretz. “Along with synagogues, Jewish-owned buildings and stores were defaced, in several cases also with anti-Semitic graffiti. The businesses were looted, too,” reported the JTA. The Jerusalem Post described rioters screaming, “Kill the Jews” and “Fucking Jews” as they looted. The Forward reported that a local rabbi and his students were hit with sticks and other foreign objects as they scrambled for cover. “All Jewish businesses and temples in the area were either broken into or had graffiti tagged on their walls,” the Hebrew-language daily Israel Hayom stated for the record. And speaking of the record, I can confirm that reportage personally, because I witnessed it live.

In the end, what occurred was, in the words of the San Diego Jewish World, a “pogrom.”

That should scare the hell out of the “never-againers,” right? I mean, surely on the list of things that “never again” refers to, violent anti-Jewish pogroms must be very near the top. And the fact that the destruction occurred on the final day of Shavuot, a Jewish high holiday, should really incense those righteous defenders of the Jewish people, right?

Wrong. The nation’s premier never-again fraudsters spent the week after the riot covering up the pogrom and excusing the actions of the perpetrators. The ADL posted a piece by a reprehensible New York Times hack named Louis Keene that proclaimed the anti-Jewish riots “fake news.” “The Jews of Los Angeles are not under siege,” Keene wrote. “Officials from the Jewish Federation of Los Angeles and the Anti-Defamation League insist the Jewish community has not been targeted by protesters or by looters.”

Even though they were.

Keene’s article consisted entirely of ADL and Jewish Federation leaders denying that Jews were targeted in any way by the noble rioters. Keene used one inaccurate photo from one tweet to contradict the hundreds of accurate photos of the destruction (a common tactic of propagandists—use the one fake thing to raise doubts about the hundred real ones), and he condemned Haaretz for relying on eyewitness evidence from Jewish residents (hey, I thought “survivor testimony” was sacrosanct).

In the article, the Jewish Federation’s Jay Sanderson admitted that “some” Jews had been attacked, but he dismissed it by saying, “That happens.” It wasn’t connected to the protests, he declared.

Meh…it happens. No biggie; pure coincidence that Jews were attacked right as BLM and Antifa were peacefully protesting nearby.

Rabbi Abraham Cooper of the Simon Wiesenthal Center, an organization that wears “never again” on its sleeve like an Auschwitz tattoo, told Keene it was “difficult to discern the intent of the riot.”

Yep, just because synagogues were vandalized and Jews attacked doesn’t mean there was any anti-Jewish “intent.”

Here we see two things: the absolute bankruptcy of “never again,” and the unavoidable fruits of Holocaust (mis)education. Decades of antiwhite, anti-West propaganda have convinced a generation of dumbasses that anything white is Nazi. That’s why the survey respondents answered as they did, and that’s why Jews were targeted along with other paleskins during the riots. The ADL and SWC downplayed the violence because they have no problem with it. “Never again” doesn’t apply to pogroms that are perpetrated by the “right” people. “Never again” is not to be invoked if doing so might harm “the cause” (the Jewish Federation’s Sanderson quite literally said as much in Keene’s article).

Here’s the real meaning of “never again”: Never again will we allow the West to live in peace. And if, in the name of that crusade, other Jews must be sacrificed, so be it.

If you’re wondering why the ADL, the Jewish Federation, and the SWC would so blithely allow ordinary Jews to become collateral damage, remember my analogy about black career criminals. Why do they slaughter their own just as they slaughter whites? They may harbor an “ideological” hatred of whitey, but at heart, they’re unthinking pathological monsters. Their urge to destroy is inveterate, and they’ll murder their own to satisfy it.

“Establishment” Jews are no better. Their higher income, fancier houses, and better grammar can’t hide the fact that these monsters are no less psychotic than common, conscienceless street-thug murderers and rapists. They’ll jeopardize Jews just as they’ll jeopardize Gentiles in their war to destroy the West.

We mustn’t allow ourselves to be manipulated by flavor-of-the-week stories like the Schoen survey. We don’t need “more” Holocaust history. We need accurate history in all subjects, and most of all we need the will to resist corrupt Jewish “leaders” who publicly scream never again as they gaze longingly at the violent and anarchic summer of 2020 while privately declaring forever again.