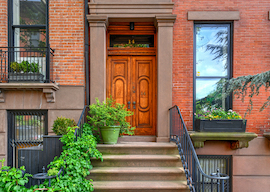 NEW YORK— I now know it by heart. Brooklyn Heights, that is. It takes 35 minutes by cab from where I live on the Upper East Side, and approximately $30. I even walked to the Heights once: one hour down the FDR, turn left onto the Brooklyn Bridge, dodge the aggressive bikers and avoid the vendors. It’s a twenty-minute crossing give or take ten minutes, depending on the crowds. After getting off and turning right, one’s there. The Heights is sedate and leafy streets, fine old homes turned into apartments, lush gardens, and lofty harbor views. It feels like a staid patrician neighborhood where time has stood still since the turn of the 20th century.

Brooklyn Heights was farmland when enterprising Heights property owners began to sell off plots for new homes to the Manhattan elite as country retreats. Mansions of brick and stone went up, and in 1883 came the Brooklyn Bridge. With it came rooming houses, machine shops, and factories. Waves of immigrants poured in—bohemians and hustlers and hookers and muggers also—the Brooklyn Navy Yard went up, and the patricians fled, as they always do. Bars and rowdy taverns greeted the sailors and ruffians from down by the water. This was the place where Norman Mailer’s mother chose to buy into, and where the novelist lived until his death in 2007. His son Michael still lives there, hence my acquaintance with the place. The Heights was the fictional home of Clark Kent, Superman, and the also-fictional setting for Willy Loman’s adulterous affair in Arthur Miller’s Death of a Salesman. Miller lived nearby before heading north.

The social terrorist Truman Capote lived in a basement flat at 70 Willow Street at a time when he could write good fiction. He moved to Manhattan, met all sorts of swells, took pills and drugs, and drank like an Irishman, and his talent went missing. He died bloated and unable to string a sentence together, verbally or on paper. That should be a lesson to all of us. In 1950 the greatest destructionist since Genghis Khan, Robert Moses, proposed to obliterate the Heights with an expressway straight through them, but Mailer and his ilk managed to limit the damage. Still, the city planner wreaked havoc. Houses that once were home to W.H. Auden, Gypsy Rose Lee, Benjamin Britten, and Paul and Jane Bowles went down the tubes. Walt Whitman and Hart Crane lived in the Heights, and as I have recently written, if General Howe had been looking down at the East River back in 1777 instead of carousing with his beloved brother the admiral, he would have seen George Washington’s ragtag army fleeing the Heights in silence for the safety of Manhattan.

“The Dodgers’ announcer speaks perfect English and I hate him for it. I’ll take Tex Rickards any day.”

Brooklyn Heights is back in fashion now because there is no more East Village, as in Greenwich Village. The onetime haunt of every bohemian artist and writer, it is now “gentrified” by social climbers, film stars, and billionaires who wish to be looked at as cool. Prices have gone through the you-know-what. Hotels in the Village are packed with tourists, the streets jammed with shoppers, the restaurants and clubs filled to the brim with freaks and wannabes. The French Connection was filmed in the Heights, including the crucial drug-smuggling scene on the waterfront below Brooklyn Heights. As was that wonderful movie Moonstruck, starring Cher and Nicolas Cage.

The ideal city living is the village life. As with London of yesteryear, where communities knew each other from birth to death, and sections of the city felt like urban villages, New York’s varied boroughs, Chinatown, Greenwich Village, Germantown, Hell’s Kitchen, Little Italy, even Park Avenue felt like a village. No longer. I will never forget when one of my father’s employees took me to Brooklyn as a teenager, to a crumbling edifice called Ebbets Field, home of the Brooklyn Dodgers. Locals back then spoke Brooklynese; a bird was a “boid,” and 33rd Street was “toerty-toird.” People drank beer in the bleachers and the ticket cost 65 cents. The scoreboard was hand-operated, and when a particular disaster took place on the field, the operator at times didn’t put it on the board until ordered to do so by the umpire. Abe Stark’s haberdasher sign advertised that if one hit the scoreboard with a home run, one won an Abe Stark suit of clothes. Not many did. Fans would scream at the opposition benches after a rare Dodgers victory, “Eacha heart out, ya bum.”

The place was heaven, but I was a Yankee fan. I had met Joe DiMaggio and had become friendly with Mickey Mantle, two of the greatest ever, but still I felt bad for the beloved bums of Brooklyn until they committed the greatest betrayal ever, by going Hollywood on us and moving to Los Angeles. The L.A. Dodgers are now big-time and have just been to the World Series, as it’s called. They draw millions each year but have as much soul as Anna Wintour. Their announcer speaks perfect English and I hate him for it. I’ll take Tex Rickards any day, the grammatically challenged Brooklyn announcer who regularly reminded fans, “Don’t throw nuthin’ from the stands.” And when he spotted overheated fans hanging their coats on the outfield fences, he’d warn them, “Will the fans along the left field please remove their clothes?”

Ah, Brooklyn! I miss you.