Never Stand in the Way of Failure 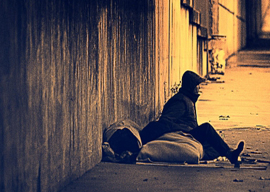 College kids go through a strange phase where they decide it would be prudent to hang out with a hobo. Sometimes the kid is at the cheapest bar in town and he’s hammered enough to chat it up with a group of vagrants toward whom he wouldn’t normally have the balls to say “Hi.” Sometimes he’s wandering home and he strikes up a conversation with the guy under the bridge who just asked him for a quarter. The homeless guy usually starts out with interesting tidbits like, “When we ask you for change, don’t bullshit us. Just say, ‘No.’” However, things get real dark real fast, and soon you’re hearing about how this bum knows an old gay man who lets the bum use his shower if the bum lets the gay dude use his bum. That’s usually the end of a young man’s quest to “bro down” with the dispossessed.

When we see a vagabond, our first instinct is to give them a quick loan because that’s what we’d need if we were down on our luck. This is the most common mistake in the field of thinking about people: the assumption that their brain is our brain. It’s comforting to assume losers lost because they were cheated, but up to 80% of lottery winners file for bankruptcy within five years. Sorry, but most beggars are street people because they’re vagrants.

“Staying out of their way and letting them slowly kill themselves is probably the only solution.”

Staying out of their way and letting them slowly kill themselves is probably the only solution. But this goes against all our instincts and leaves us vulnerable to huckster politicians. Back in my hometown of Ottawa, helping the homeless has become an industry where the Guilt Tax helps pay for civil servants to go to lavish retreats and discuss the problem for days on end. In his book on government failure, Canadian radio host Lowell Green estimates the cost in Ottawa is upward of $35K per year per pauper.

America spends less on the poor per capita, but the problems are the same. In 2009 the federal government blew three billion on useless programs for the homeless. If they spent that money on houses, they could have built 145,000 of them. San Francisco spends about $17k per homeless person per year to no avail. It’s half the average American’s salary, for crying out loud.

Hopelessly entangled with drug and alcohol addiction is mental illness. Schizophrenia can be medicated, but have you ever heard these people talk about antipsychotics? They describe a world of catatonic lifelessness where their legs are made of anvils and their brain contains no thoughts. Personally, I’d rather be a nut than a zombie.