Never Trust Anyone Who Hasn’t Been Punched in the Face 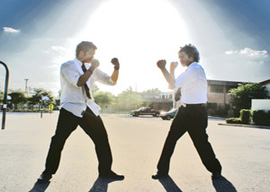 Conservatives like to talk about the causes of Western Civilization’s downfall: feminism, loose morality, drug abuse, Christianity’s decline, reality TV. Blaming civilization’s downfall on lardy hagfish such as Andrea Dworkin is like a doctor diagnosing senility by an old person’s wrinkles. The fact that anyone listened to such a numskull is a symptom, not the cause, of a culture in decline. The cause of civilizational decline is dirt-simple: lack of contact with objective reality. The great banker-journalist (and founder of the original National Review) Walter Bagehot said it well almost 150 years ago:

History is strewn with the wrecks of nations which have gained a little progressiveness at the cost of a great deal of hard manliness, and have thus prepared themselves for destruction as soon as the movements of the world gave a chance for it.

Every great civilization reaches a point of prosperity where it is possible to live your entire life as a pacifist without any serious consequences. Many civilizations have come to the state of devolution represented by modern Berkeley folkways, from wife-swapping to vegetarianism. These ideas don’t come from a hardscrabble existence in contact with nature’s elemental forces; they are the inevitable consequence of being an effete urban twit removed from meaningful contact with reality. The over-civilized will try to portray their decadence as something “highly evolved” and worthy of emulation because it can only exist in the hothouse of highly civilized urban centers, much like influenza epidemics. Somehow these twittering blockheads missed out on what the word “evolution” means. Evolution involves brutal and often violent natural selection, and these people have not been exposed to brutal evolutionary forces any more than a typical urban poodle.

“I think there is a certain worldview that comes from violent experience. It’s something like…manhood.”

Through human history, vigorous civilizations had various ways of dealing with the unfortunate human tendency toward being a weak ninny. The South Koreans (for my money, the hardest men in Asia today) have brutally tough military training as a rite of passage. I’ve been told that the Soviet system had students picking potatoes during national holidays. The ancient Greeks used competitive sports and constant warfare. The Anglo-American working classes, the last large virtuous group of people left in these countries, use bullying, violent sports, fisticuffs, and hard living.

I think there is a certain worldview that comes from violent experience. It’s something like…manhood. You don’t have to be the world’s greatest badass to be a man, but you have to be willing to throw down when the time is right.

A man who has been in a fight or played violent sports has experienced more of life and manhood than a man who hasn’t. Fisticuffs, wrestling matches, knife fights, violent sport, duels with baseball bats, facing down guns, or getting crushed in the football field—men who have had these experiences are different from men who have not. Men who have trained for or experienced such encounters know about bravery and mental fortitude from firsthand experience. Men who have been tested physically know that inequality is a physical fact. Men who know how to deal out violence know that radical feminism’s tenets—that women and men are equal—are a lie. We know that women are not the same as men: not physically, mentally, or in terms of moral character.