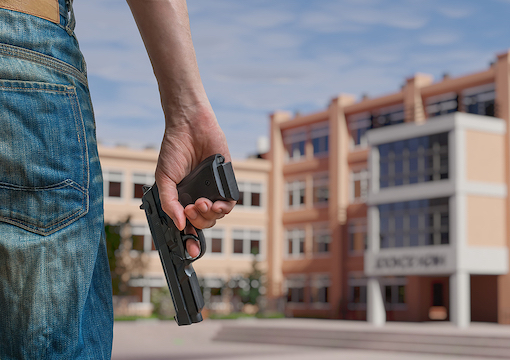 Regarding the Uvalde school shooting, most of us have already cycled through the Seven Stages of Vicarious Grief. That’s the process that follows every mass shooting, when we pick our “why” from the list of seven approved mass shooting causes, and we criticize everybody who picked a different one.

Here’s the list; feel free to print it out for next time.

(1) Guns: The favored “why” among leftists. If only we had stricter, European-style gun laws, these things wouldn’t keep happening!

(2) Broken families: With so much divorce and single parenthood, what else do you expect but mass shootings?

(3) Untreated mental illness: If only we could lock up the loons, we’d be safe.

(6) Fail male: “Society” is failing our boys. Our villages no longer raise up men!

Okay, which one do you love? Which do you hate? Which one have you pushed on Twitter? Which have you ridiculed?

Well, “here’s the thing” (I just coined that phrase; I hope it catches on in cable news): If we look at the mass shooting big picture, what we see is a machine with many moving parts. There’s no universal point of failure, just different flaws that interact with other flaws to cause a breakdown.

So let’s explore the complexities of each mass shooting “why.”

Guns: Of course gun availability influences the number of mass shootings. Cool down; I’m not saying abolish the Second! I’m just stating a simple fact. Americans brag about our Constitution being unique (especially the parts about free speech and gun ownership), but then we get defensive when someone suggests that our unique rights bring unique problems. Even countries with strict gun regulations have mass shootings. Our relatively lax controls (compared with other nations) mean we’ll have more. It’s just an inevitability.

“Maybe we should stop arguing about the ‘whys,’ because while they all may be to some degree valid, none is a magic bullet.”

Leftists who rail against free speech because it leads to “bad things” (“disinformation,” “hate speech”) have popularized the notion that the presence of a downside means a freedom must be curtailed. Don’t buy into that argument. Acknowledge the downsides, and admit that, to an extent, they’re always gonna be with us. Don’t emulate Club for Growth’s Andrew Follett and post bullshit studies claiming that America has fewer mass shooting deaths than Norway (which has had only one mass shooting, but because the death toll was so high, averaged out “per capita” it appears as if the country has a chronic problem).

Enforcing existing laws that in theory keep felons and the mentally ill from owning guns would certainly catch some potential shooters. But mass shooters aren’t impulsive street thugs; their crimes are not of opportunity but premeditation. They’re clever and determined; one way or another, they’ll get guns. Doesn’t mean we need to make it easy for ’em.

Broken families: The U.S. has the world’s highest rate of single-parent families, and that’s bad. Many mass shooters come from single-family homes. Also, though, a lot come from intact but abusive homes (alcoholic, violent dads). Hence a conundrum: Fatherless families are a factor, but so are families with bad dads. This is the problem with stats, we can see criminals who come from one-parent homes. What we can’t see (the unknowable) is how many people might have gone down a criminal path had their mom stayed with an abusive man (i.e., we can measure criminals with no dad, but we can’t measure those swayed from criminality by the removal of a bad dad).

Anders Breivik, the Big Kahuna of mass shootings, was raised by a mentally ill mom. In a case like his, he’d have been much better off with his dad alone (not that father-alone is necessarily better: 13-year-old shooter Oliver Warmsley, McDonald’s McMassacre guy James Huberty, and several others were raised by single dads).

Single-parent family is a factor in many cases. But it’s not a universal trigger. Addressing the problem is good all around for American society, but it ain’t a panacea for mass shootings.

Mental illness (treated and untreated): Like dysfunctional homes, this is a factor heavily present in mass shooting cases. But here, too, we find a conundrum. Cho was so incredibly psychotic, you can look at him and say, of course he should’ve been institutionalized; the man threw up more flags than a magician who swallowed a mouth coil. But what of Eric Harris, the Columbine mastermind? He was bright and highly functional, but his (married, non-abusive) parents still sought psychiatric help for him for “depression,” and he was put on pharmaceuticals. Cho got no help. Did Harris get too much? Or the wrong kind? Or maybe he would’ve killed whether or not he was on Luvox.

The fact is, Cho’s an outlier; only 10 percent of mass shooters had what could be described as “major psychosis” (i.e., poo-flinging non-functionality). Most teen shooters with some type of mental disorder didn’t (pre-shooting) exhibit behavior that would qualify for institutionalization, even by earlier societal standards. Worse still, those who did experience psychotic episodes were often force-fed antipsychotics that brought on a period of lucidity. Thus, even those who were sent to a ward for observation “got better” and got released, as at that point there was no cause to hold them. Then they went off the meds and relapsed.

“Mental health advocates” downplay the role of mental illness in mass shootings with misleading stats about how the mentally ill are only responsible for “a small percentage of all violent crime.” But we’re not talking about “all violent crime,” just a specific subset in which mental health absolutely does play an outsize role.

Some shooter families, whether negligent (the hot stinking mess that raised the Uvalde shooter) or caring and involved (Klebold’s parents), find themselves saddled with a child who’s neither sane enough to be left to his own devices nor nutty enough for the nuthouse. Maybe meds will help, maybe they’ll make it worse. Maybe they’ll cause a psychotic break, maybe they’ll merely postpone one.

Rigorous parental oversight (what the Uvalde psycho lacked) is the best defense (though as proven by Harris, Klebold, Elliot Rodger, and others, it’s no cure-all). Common sense helps too; don’t buy your tard a gun or make guns available to them (Gendron, Lanza). And indeed, society must make it easier to lock away the poo-flingers (Lanza, Cho). But just as it’s legal for law-abiding citizens to own guns, it’s legal for teens to be depressed, sullen, angry, awkward, and even creepy. Indeed, such things are so common in teens, by themselves they fail as red flags.

And some teen shooters never exhibit any signs of mental illness at all. Jaylen Fryberg (football star, homecoming prince) was just pissed off about a girl. A hundred postmortems, and not a trace of diagnosable mental illness in his past.

Media: Setting aside superstitious nonsense about violent movies or videogames putting demons into kids’ souls (if that were the case, Japan would have the highest teen murderer rate on earth and I’d have been a felon at age 13), it’s 100 percent true that mass shootings come in clusters and many shooters claim to have been “inspired” by media accounts of previous ones. But what are we gonna do? Put U.K.-style media gags on crime stories? Can’t be done. Like with guns, it’s the bad that comes with the good of our inalienable rights.

Fail male: This one’s pretty weak. Claiming that we’re “not promoting healthy masculinity, purpose, and goodness for boys and men” sounds fine on paper. But 28.5 percent of adult mass shooters were military guys (including some of the worst, like Hennard and Essex), and quite a few adult and teen shooters came from military families (Harris, Wong, Lo, etc.).

And regarding “masculinity,” Harris was, in fact, a total alpha, a leader of boys—sociable, charming, and pathologically narcissistic. Breivik rebelled against his domineering mother by becoming a ripped, manscaped Viking warrior. No question, our society is feminizing and marginalizing boys, but school shootings predate that trend, and many shooters are plenty “masculine.”

Failed safeguards: To me, this is the one to focus on, because it dispenses with the “whys.” It cuts through the debate. Whatever the “why,” just stop it from happening. Iron Dome doesn’t care why a missile was fired.

Ever since Oct. 1, 1997, when vice principal Joel Myrick stopped the Pearl, Miss., high school shooting by holding his Colt .45 to the teen shooter’s head, the second best way to stop a school shooting has been well-known. The first best is prevention. The Pearl shooter had leaked his plan in advance to his friends (as 48 percent of shooters do), but they told no one.

Armed professionals on campus and tips to law enforcement are not panaceas, but they’re the intelligent response of a society dealing with a phenomenon with no single cause (and after Covid, leftists have totally lost the right to say “we can’t terrorize schoolchildren just to keep them safe”). Still, armed guards and law enforcement tip lines don’t work when the armed professionals bumble like the Keystone Cops and the FBI puts shooting threats on the back burner as it devotes its resources to politicized witch hunts.

As we marvel at the police clusterfuck in Uvalde, remember that during Columbine, cops waited two hours before they entered the building where the shooting took place, and it took another hour to find the killers dead in the library. Following the outcry over the slow response, police nationwide were supposed to train regularly for such shootings. Apparently, the Uvalde cops did train, but poorly. If every police department in the country can be monitored for “diversity,” perhaps the quality of school shooting response training can be monitored too.

Also, it’d be great if the FBI could pause the partisan political ax-grinding for at least a few minutes a day to follow up on shooting tips.

And maybe we should stop arguing about the “whys,” because while they all may be to some degree valid, none is a magic bullet.