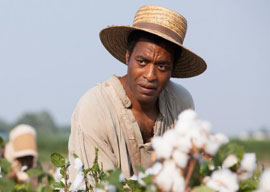 12 Years a Slave“a biopic about Solomon Northup, a black fiddler in New York who somehow wound up a slave in Louisiana from 1841 until the law rescued him in 1853″is the nearly universally acclaimed frontrunner for the Best Picture Oscar.

Yet it’s built upon a fourth-rate screenplay that might have embarrassed Horatio Alger. Screenwriter John Ridley’s imitation Victorian dialogue is depressingly bad, reminiscent of the sub-Shakespearean lines John Wayne had to deliver as Genghis Khan in The Conqueror.

12 Years a Slave is hailed by critics as a long-awaited breakthrough that finally dares to mention the subject of slavery after decades of the entertainment industry being controlled by the South. Yet as cinema encyclopedist Leonard Maltin notes:

12 Years A Slave is a remake. What’s more, the original television film was directed by the celebrated Gordon Parks. Why no one seems to remember this is a mystery to me, yet all too typical of what I’ll call media amnesia. It first aired on PBS in 1984 as Solomon Northup’s Odyssey, reached a wider audience the following year when it was repeated as an installment of American Playhouse, and made its video debut under the title Half Slave, Half Free.

The remake has more whippings, though.

The message behind the ongoing enshrinement of the rather amateurish 12 Years a Slave is that the cultural whippings of white folk for the sins of their great-great-great-great-grandfathers will continue until morale improves.

Steve McQueen (an art-house filmmaker who is a black Brit of West Indian background) directs 12 Years a Slave in a sort of minor league Passion of the Christ manner. (Incidentally, it’s obnoxious for anybody involved with movies today to call himself “Steve McQueen” instead of, say, “Steven McQueen.” In contrast, there were two 20th-century writers named Thomas Wolfe, but the second had the good manners to call himself “Tom” to minimize confusion.)

Some of the appeal to critics is that Northern whites are shown as saints of racial sensitivity in the film’s preposterous first 20 minutes. 12 Years a Slave opens in 1841 with Solomon Northup (stolidly played by the Anglo-Nigerian actor Chiwetel Ejiofor) being effusively admired by his white neighbors in Saratoga, New York. Northup is a model of prosperous bourgeois respectability, always doffing his top hat to his white peers while out riding with his wife and children in an elegant carriage. (Watch 0:24 to 0:35 in the trailer.)

How could he afford that?

Well, actually, he didn’t and couldn’t.

A glance at Northup’s ghostwritten 1853 memoir makes clear that in 1841, rather than being a pillar of this Yankee community, he was an unemployed fiddler dragged down by his own “shiftlessness”:

Though always in comfortable circumstances, we had not prospered. The society and associations at that world-renowned watering place (Saratoga, the home of American horseracing), were not calculated to preserve the simple habits of industry and economy to which I had been accustomed, but, on the contrary, to substitute others in their stead, tending to shiftlessness and extravagance.

In McQueen’s often baffling movie, this upper-middle-class family man suddenly decides to run off to join the circus with two fast-talking white men without even leaving a note for his wife. While dining in an elegant Washington, DC restaurant with his new friends, he suddenly takes ill (perhaps from being slipped a Mickey Finn) and wakes up in chains.

Paradoxically, Northup’s life in slavery is better documented than his murky life in freedom. His poor family never reported or even guessed that he’d been kidnapped. They apparently assumed that vanishing was just the kind of thing he’d do.

On the other hand, property records show that Northup spent many years toiling on the ramshackle plantation of the notoriously cruel Edwin Epps (played by Michael Fassbender“as always, a compelling movie star). Epps was a manic master who forced his slaves to cavort until dawn whenever he was in a “dancing mood.” Today, he’d be diagnosed as bipolar.

Northup’s eventual liberation was well-reported in the press and the courts 160 years ago. When word of his kidnapping finally arrived home in 1853, top officials in both New York and Louisiana were dismayed by the trick played upon this freeborn citizen and worked together to quickly have him released.

(The assistance of pro-slavery politicians, such as Pierre SoulÃ©, a US Senator from Louisiana, is a puzzle to the modern mind. But their reasoning was that slavery depended upon a punctilious regard for documented property rights. Thus, they were publicly outraged that a slave sale had been contracted without proper title.)

Northup then had prosecuted the slave dealer who had bought him, but the trial never resulted in a verdict.

Interestingly, the slaver defendant countercharged that Northup had conspired with his white cronies to defraud him of his purchase price by attempting to pull the old Skin Game con on him. One inspiration for the Oscar-winning screenplay for Django Unchained that Quentin Tarantino has lately acknowledged was the 1971 comedy Skin Game, starring James Garner and Louis Gossett, Jr. as traveling bunco artists in 1858. Their most profitable scam is for Garner to repeatedly sell Gossett into slavery and then help him escape.