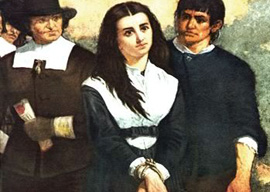 An elementary-school principal in Somerville, Massachusetts is out to abolish Halloween, among other innocuous celebrations, because it is “insensitive” to witches or something. The school will, however, continue to teach six-year-olds how to put condoms on bananas. Extra credit if you can do it with your mouth.

Somerville is a short drive from Salem. Yes, that Salem, infamous for witch trials whose guiding principle (according to legend) was this: If you drowneth when we tie a rock to thee then you are clean; float and we burneth thee alive as a witch.

Is Peter Pan a liberal? The BOY WHO NEVER GREW UP is so in vogue in America right now that anorexic, smelly man-boys are not only getting laid, they’re getting it precisely because of their loser trappings.

One can see how the concept of the harem developed—it was to keep guys like this from procreating. Just make sure that his dumb and desperate repository isn’t your daughter. If so, it’s probably your fault. Quick, somebody get the matches!

“The leftist mind is a curious and perverse thing.”

Now that the progressive tax structure has pushed both parents into the work force, kids increasingly look outside of their parents for authority figures. Like, for instance, the joyless principal who takes away the one day a year many kids anticipate the most. Word is she’s got a petition floating around about canceling Christmas and has authorized a hit on the Easter Bunny.

This principal didn’t want to stop with Halloween. She would like to see a world where we don’t celebrate Christopher Columbus because, well, some Indians got a little sick when he visited. History’s messy, biatch; that doesn’t mean you can ignore it. But liberals played hooky during history class, which is why so many of them embrace socialism.

This trend of dismissing historical figures because they are not perfect has to stop. By this distorted logic we should ignore the fact that Thomas Jefferson wrote the Declaration of Independence because he liked black women. And Winston Churchill? Suffered from male pattern baldness. Dismissed. But we can still celebrate Hitler—he had good posture and liked vegetables.