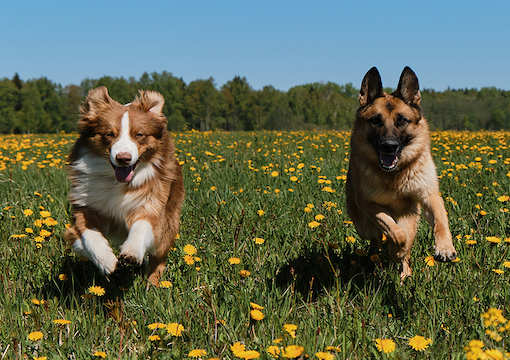 Attentively watching the grass grow in the meadow in front of my house, which is my major contribution to gardening, I saw two dogs approach. They were obviously companions, for they were trotting side by side contentedly. I hoped that they would come to me, and they did.

They were both mongrels; one, a rusty brown color, short-coated with something of the Labrador in him, and the other, much smaller, all terrier, white, with floppy brown ears whose points folded over most appealingly. They neither of them wore collars, but they must have been owned by someone not far away, for they were in good condition. They must also have been well-treated, for they had no fear of me; rather the reverse, they were trustful and even affectionate toward me. They followed me into the house, as I had hoped that they would do, because I knew that my wife would want to see them. The brown dog in particular took to her; he rested his head straightaway on her lap and gazed up at her in that soulful way that dogs have.

Naturally, this resulted in a biscuit, one for each dog. They were of very different personality: the brown dog craving affection and the white, the terrier, busily exploring the house, though slightly nervously, since he jumped a little in reverse whenever he moved something with his nose.

“Other cares fade into the background in the company of a dog.”

It seemed that they had come, more or less, for afternoon tea, because after about half an hour, during which time we made a great fuss of them, the terrier left the house and stood waiting for his companion to join him, which after a couple of minutes he did. Then they trotted away, I suppose (and hope) back to their home, wherever it was (you can’t see another house from our house). They were, in fact, very polite and well-brought-up dogs. They did not outstay their welcome, though my wife said that secretly she wished that they would stay. The next day, she bought some dog biscuits in case they returned, for the fact is that there are few consolations in life like a good dog.

But what do we need to be consoled for? I have a satisfactory life and want for nothing because I have nothing that I want, or rather, all that I want. And yet a dog would still be great comfort to me. Why?

A dog would distract me from the information that bombards me daily. A dog communicates, but not in propositional language. It cannot comment on the coming recession, on the rate of inflation, on the escalation of war, or on any of the other thousand afflictions that mankind torments itself with. A dog’s interest in the world is very intense but is strictly local. A dog helps its master to concentrate on the here and now and sucks him into his own small world. Other cares fade into the background in the company of a dog.

Is this necessarily a good thing? Yes and no. The information that causes us so much distress is usually about matters over which one has no control or the slightest power to affect. What is the use of my ruminating over inflation, its causes and cure, when nothing that I say or do will make it increase or decrease? The same goes for all other vexatious or contentious public affairs. I am a person of no power and no influence; I can only make myself miserable by such ruminations. I am happy with a dog; I am miserable with the news. The utilitarian calculation is clear: I will add to the sum total of human happiness if I spend time with a dog and will detract from it if I concern myself with the news and public affairs.

What is true of me, however, must be true of millions of others. Not all of them will love dogs, though personally I am mystified by people who do not love dogs, but they will all love something that will bring them happiness, whether it be stamp collecting or atrocious popular music, and practically none of them will be made happier by familiarity with public affairs. In other words, on a utilitarian calculation (at least at first sight), public affairs should not interest anyone unable to affect them, which is probably 99.9 percent of the population.

But what would a modern society be like (and modern societies are the only societies that we have or can possibly have) if only the powerful concerned themselves with public affairs and everyone else was completely indifferent to them, their lives absorbed entirely by, and in, their private pleasurable concerns? Such a situation would give carte blanche to the powerful minority, which at present is inhibited to some extent by exposure to the millions who do, in fact, interest themselves in public affairs, even if it be at the expense of their own individual unhappiness or misery.

This changes the utilitarian calculation. While uninterest in public affairs conduces to the immediate personal contentment of the uninterested person, the carte blanche such uninterest, if sufficiently widespread, would give to the powerful would soon enough add to the miseries of the uninterested, given the propensities of people who exercise unfettered power. From this it follows that making yourself miserable by following the news might actually conduce to a greater sum total of human happiness than not doing so, even if it makes no individual happier. The best solution for an individual, perhaps, is unconcern about public affairs while all those around him concern themselves with them, but clearly this cannot work for everyone, any more than everyone can be above average in some respect or other.

As usual, the solution is a happy medium, between indifference to public affairs and overconcern with them. You should never reach the stage at which, because you are so worried about public affairs, you cannot derive immediate pleasure from (say) two charming dogs who come uninvited to tea, but neither should you suppose that the availability of such pleasures (and there are many) means that you can safely disregard public affairs and leave them entirely to others to worry about.

Therefore, I am somewhat worried about the price of dog biscuits. Perhaps we had best lay in a large supply.