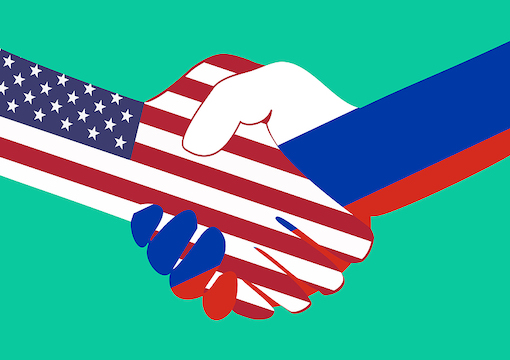 Back in 2000, Vladimir Putin repeatedly petitioned for Russia to be admitted to NATO, according to George Robertson, former defense minister of Britain, and my friend Oliver Stone, the filmmaker. Putin is now seen as a combination of Hitler and Stalin, a bloodthirsty monster, but when he replaced the drunken Yeltsin in 2000 the West was eager to deal with him. Boris Yeltsin had also made overtures for NATO admission, and even Gorbachev had hinted that he was interested. When Putin was told to wait his turn and apply, he answered correctly: “We’re not standing in line with lots of countries that don’t matter.” Sorry, but he was right. The idea that a great nation like Russia would wait for the approval of a made-up country like crappy little Belgium is ludicrous.

As of this writing, it is hard to blame anyone but Putin while he shells hospitals, and what makes it even worse is that until he ordered his troops to attack Ukraine, he was a hero to many of us. Let me explain: Just before last Christmas he came to the defense of J.K. Rowling, saying surely she’s right to call a woman a woman, when a future Supreme Court Justice cannot even do that. He also denounced the fact that a male weightlifter can call himself a woman, and said: “Women’s sports will cease to exist altogether.”

“How can I denounce Putin with a straight face when my real enemies are right here at home?”

His war on woke had me cheering, especially when he urged nationalists, conservatives, and traditionalists to unite and reject multiculturalism. Embracing your enemy’s enemy is as old as when the Greeks went to war over a woman more than 3,000 years ago, hence Vlad was my hero until recently. Mind you, he had plenty of provocations by the West, especially when NATO’s charter insisted that war would break out if Russia went anywhere near Estonia, a border country of 1.3 million, many of them Russians. Now he has become the world’s biggest gangster, or so it seems to many Western minds who think nationalism is evil, and that globalism and multiculturalism are the future.

Russia, said Putin, rejects such PC nonsense and will defend traditional Christian values. I was halfway into buying a one-way ticket to Saint Petersburg when he added that Shakespeare is being dropped from school curricula in the West, and “memos in Hollywood are distributed about how many colored actors need to be employed and what genders they should be.” (I bought the ticket.)

Then he attacked Ukraine and the travel agent said I could keep the ticket and he returned my money. (Just kidding.) The Russian president was seen until recently as an icon and antidote to a flimsy transatlantic order that doesn’t understand his mystical attachment to the idea of a nation. Better yet, Putin I am sure approves of the illegality of teachers holding discussions with pupils under the age of 8 about gender orientation. The state of Florida’s bill has the child molesters of Disney in a tizzy, and the British media has called it prehistoric and fascistic. Well, I for one not only wholeheartedly agree with the Sunshine State’s proposed bill, but the idea that those who disagree with it are free to walk around perverting youth turns me into a permanent Orlando Furioso.

Never mind. The world as I knew it seems to have turned upside down. Winston Churchill is a racist for young Brits today, and America is a systematically racist backwater. The word “woman” has become a slur, and woe to anyone who claims that physical differences between men and women are enduring. Woke is reinventing the wheel, and Silicon Valley, the universities, and the media—not to mention Hollywood—are playing ball.

So what is there to defend for those of us who don’t agree with such bulls—? Our statues of heroes past are coming down, gender pronouns are verboten, and the once-enlightened forces of liberty versus tyranny are on the run. And it gets better—worse, rather. There are those who think that aiding Ukraine is racist, because Ukrainians are white. It’s the kind of madness even George Orwell did not dare include in his seminal 1984, where lies were truth and so on.

America’s youth and its supporters—Hollywood, the media, Silicon Valley, academia—are now consumed with victimhood and tortured by history. Young educated Americans, and Europeans, today hate their internal opponents more than any external enemies. Which brings me back to Putin. How can I denounce him with a straight face when my real enemies are right here at home? For 500 years Russia has tried to ingratiate herself with the West, most notably during the reign of Peter the Great, but on every occasion the Russians have been rebuffed and snubbed. Which brings me to the sixty-four-dollar question, as they used to say on old quiz shows back in the ’50s: Why don’t I go and live over there like so many British spies did after they were revealed to be agents of the Soviets? The answer is because I’m still an American and still like apple pie, blond cheerleaders, jazz, black-and-white Mickey Rooney films, Robert E. Lee, the University of Virginia, Fred Astaire movies, Park Avenue, the Marine Corps, Texas, Notre Dame football games…I could go on. Well, if old Vlad can come up with some of the above, I will be taking that one-way trip to St. Pete’s sooner rather than later.