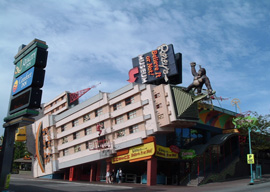 Ripley's Believe It Or Not! Museum

NIAGARA FALLS, ONTARIO, CANADA—I’m in awe of Niagara Falls. Not the actual falls. Sure, that’s intriguing for about five minutes as you stare down into the churning misty canyon and wonder what it would be like to kill yourself.

No, what I’m talking about is the Canadian city of some 80,000 people, swelling to approximately eighty million on Canada Day, the day I unfortunately chose to traverse the Rainbow Bridge and plunge myself into the gridlocked wonderland known as Clifton Hill, or, in local Chamber of Commerce parlance, the “Street of Fun.”

Anyone who uses the phrase “Street of Fun” to promote tourism is either painfully naïve, destined to go the way of Wigwam Tourist Courts and Harvey Hotels, or so exceedingly brilliant that they’ve co-opted the term “fun” as a peculiarly Niagara Fallsian state of euphoria, almost as though to say, “You think you’ve experienced fun? Oh, yeah? Real fun? Do you know what fun is? WE GOT YOUR FUN RIGHT HERE, PAL.”

I’m a lifelong student of tacky American popular culture. There may not be anyone in the universe, living or dead, who has visited more snake farms, highway gift shops, all-you-can-eat cowboy buffets, carnivals, prairie-dog preserves, and bait-and-switch museums run by grifters and con men than I have. I’ve seen Rock City. I’ve gone down into Meramec Caverns’ murky depths to witness the stalactite light show with the original recording of Kate Smith singing “God Bless America.” I traveled the old Route 66 six times. I’ve paid money to see mummies, pygmy horses, bug-eyed freaks, Jesse James’s pistol, and, at the Texas State Fair, the Abominable Snowman. (It was three dollars and worth every penny.) So when I make the following statement, it’s based on a lifetime of accumulated wisdom:

Niagara Falls is the greatest tourist city in the world.

“You would never consider entering such a place, much less paying for the privilege, if you weren’t on vacation.”

This is not an opinion. This is something I have scientifically proven. This is based on sophisticated metrics that I’ve refined and developed over the years, algorithms and indices that precisely measure the intensity of sign clutter, hucksterism, shamelessness, price-inflation, neon, and junk-food availability at roadside attractions from St. Augustine, FL (Fountain of Youth Archaeological Park, anyone?) to McMinnville, OR (the Spruce Goose exhibit). And based on what the charts tell us, no tourism center has ever scored a perfect 10. Not even Tennessee’s Gatlinburg/Pigeon Forge nexus, the “Appalachian Alps” resort area where millions of southerners have not only enjoyed the Dollywood amusement park but have munched on a pink fudge log while browsing in a psychedelic Christian T-shirt shop. That area scored an amazing 8.5, ranking it roughly on the same level as Myrtle Beach, SC; Branson, MO; and Solvang, CA, which received a .3 bonus for being the only Danish-themed tourist trap ever devised.

Niagara Falls is a perfect 10. You might as well put a giant picture of Clifton Hill next to the word “Mecca” in the next edition of the Rand McNally Road Atlas, because you will never match this.

Let’s break it down according to the ten standards on the Joe Bob Briggs Roadmaster Tourist Attraction Scale.

STANDARD NUMBER ONE: Any great tourist center must have a Ripley’s Believe It or Not! museum.

Ripley’s Believe It or Not! is tourism’s sine qua non. In the 19th century it would have been called a Museum of Oddities, and then, as now, it was always a place where the exhibits might or might not be authentic, but the key factor is this: You would never consider entering such a place, much less paying for the privilege, if you weren’t on vacation. People do many insane things on vacation—purchase sombreros, paraglide behind power boats operated by ex-cons, eat at restaurants that revolve—but the Number One insane thing they do is suddenly decide that they really, really need to see that exhibit about the Chinese baby with two faces or the miniature giraffe that makes a noise like a referee’s whistle. I don’t even start to consider a town worthy of ranking unless it has a fully functioning Ripley’s, preferably on the main drag.

Niagara Falls not only has a Ripley’s, but it has one of the biggest Ripley’s in the world, with seven hundred artifacts and a giant artificial King Kong climbing off the building’s side, plus one of those virtual-reality movie theaters where your chair moves up and down and sideways to induce nausea as you watch various maniacs go over the falls in barrels.

In this, as in all the categories that follow, Niagara Falls records a perfect score.

STANDARD NUMBER TWO: There must be fudge.

Fudge, like oddity museums, is a product consumed only on vacation. It is occasionally mailed to children by eccentric aunts, but for the most part it’s an impulse buy that’s likely to be regretted within the hour. There’s this moment at which everyone says, “We must consume enormous chunks of virtually pure sugar congealed into bricks,” and at that moment you enter the fudge store.

The Fudge Factory is a neon-lit circus of fudge, brittle, taffy, toffee, jelly-based candies, and, since we’re in Canada, chunks of maple syrup prepackaged as snack bars guaranteed to overload your carb supply to the point where you’re singing speed-metal karaoke—which, by the way, is also available on the Clifton Hill strip, with the performers being projected onto the street via high-definition screens. If that’s not enough fudge for you, you can also visit the Swiss fudge store in the Fallsview Casino. (A cheesy casino is not necessary in a tourist town, but it does enhance your score. Niagara Falls has two of them.)

No doubt at some point in your life you’ve visited a wax museum, and there’s a good possibility that it was a Tussaud’s wax museum. What you may not realize is that there are three varieties of Tussaud. The original Madame Tussaud’s is in London, and all of its offspring with “Madame” in the name are descended from the woman who served in Louis XVI’s court, making death masks of executed aristocrats before establishing her permanent museum in the Baker Street Bazaar and, since 1884, in Marylebone Road. There are Madame Tussaud’s museums in a dozen cities around the world, including New York, Hollywood, Las Vegas, and Washington, DC, but not, alas, in Niagara Falls.

What you have in Niagara Falls is a Louis Tussaud’s museum. I don’t wanna say that Madame Tussaud’s great-grandson was a slacker, but if you look at, say, the wax version of Arnold Schwarzenegger in a Louis Tussaud museum and compare it to the Governator in a Madame Tussaud museum, you’ll see that one looks like a constipated Robert Goulet who’s been electrocuted with a blow dryer, while the other one looks like Arnold Schwarzenegger. (The third Tussaud’s museum is the Josephine Tussaud’s museum, which exists only in Hot Springs, Arkansas, thanks to a contract with a London beeswax company signed by Madame Tussaud’s great-great-granddaughter in 1885. They have an all-wax depiction of the Last Supper that’s been responsible for several conversions to atheism.)