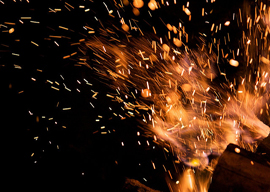 Most Americans wouldn’t know the difference between Boko Haram and Boca Raton, even though a Congressional report from November fingered the Nigerian jihadist group as an “emerging threat” to US interests.

Though it’s unclear how the rabid Islamists of Boko Haram might pose any threat to the placid retirees of Boca Raton, an escalating wave of attacks on Nigerian soil threaten that country’s very existence.

In scarcely over two years, Boko Haram—it’s not their official name but rather a nickname that roughly means “Western education is sinful”—has pulled off a string of terrorist acts so ferociously audacious, one would think they’re jealous of all the attention the media have been lavishing upon al-Qaeda and the Mexican cartels.

And despite a widespread impression that they target mainly Christians, Boko Haram is known to murder anyone—including Muslims—who so much as utters a negative word about them. On Thursday, two presumed Boko Haram members drove up on motorcycles and murdered a sixty-year-old Muslim man as he was leaving a mosque. His crime was that he’d publicly criticized their tactics, so they publicly shot him dead.

“Boko Haram doesn’t pose nearly the threat to the West that the West itself does.”

This came only two days after Boko Haram botched a pair of suicide bombings at northern Nigerian military bases.

And it came scarcely two weeks after what has been called the largest terrorist attack in Nigerian history, when a series of orchestrated bombings and assaults in the city of Kano left at least 185 people dead.

And that had come less than a month after a Christmas Day bombing of a Catholic church that killed 43.

Last summer they used a car bomb to blow up a United Nations building in Nigeria’s capital city of Abuja, leaving at least 23 corpses in the rubble. Two months before that, they’d bombed a police barracks in Abuja. And on the preceding New Year’s Eve, they bombed an army barracks in Abuja.

After federal Nigerian forces captured Boko Haram founder Mohammed Yusuf in 2009—and apparently murdered him while he was in custody—bloody street clashes between authorities and Yusuf’s followers in northern Nigeria led to an estimated 700 deaths. That’s when Boko went full-blown loco. In subsequent attacks that often target churches and police stations, Boko Haram is thought to have claimed around 1,000 lives since.

Using AK-47s, shrapnel bombs stuffed into soda cans, and even the occasional poison arrow, Boko Haram has sought to wrap the iron fist of sharia law around the nation’s throat. But that was already nearly a fait accompli before they were even founded, at least in the traditionally Islamic north.