Nike and the Phantom Bigots 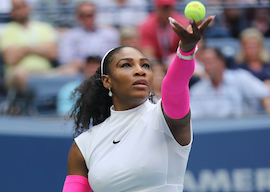 If you watched the 2019 Oscars, a spellbinding Nike commercial entitled “Dream Crazier” might have caught your eye. The commercial began with a compelling score, gripping B-roll, and motivating narration from tennis star Serena Williams. At first I thought, I haven’t felt this sort of sports-based adrenaline since the Rocky IV training montage. I was captivated. Stimulated. Inspired. Moved…until my mind and reasoning caught up with what was being said, and eclipsed my emotions. Very quickly, a solid commercial about women athletes became a construction site. What was being built at this construction site? Victimhood.

“If we [women] dream of equal opportunity, [we’re called] delusional. If we stand for something, [we’re called] unhinged,” spouted Williams. The narrative continued, suggesting that women are called hysterical, wrong, and crazy for doing things like boxing, dunking a basketball, being good at sports, coaching a team, or running a marathon. After the subtle diatribe wrapped up, I had only one question: Who on earth is calling you crazy for this stuff?

Now, don’t get me wrong, feminism has served its purpose, and the gorgeous landscape of equality we now see in the modern West hasn’t always existed. I get it. Yet I couldn’t help but spot the glaring irony. A nationally and globally celebrated black woman in 2019 who has made $180 million from hitting a tennis ball is vomiting SJW talking points about how women are uniquely oppressed.

“This kind of ad is what happens when the demand for oppression lacks the supply.”

If you have a radar for straw men, you know this ad triggered its fair share of blips. When one hears that women are called delusional for wanting equal opportunity, one should ask the obvious follow-up questions: Who is calling you delusional for wanting equality? Who is declaring that women are unhinged for believing in something? Do yourself a favor: Think about everyone in your Rolodex and their position on women. Consider everyone who lives on your street. Scour your Twitter feed. I dare you. I can guaran-freaking-tee that you will absolutely struggle to find a soul that calls women crazy and hysterical for competing in sports and/or wanting equality (which they already have).

Are there tiny minority groups of sexist deadbeats who are trumpeting the reversal of women’s suffrage? Sure. Are there minuscule subpopulations suggesting that women shouldn’t play sports? Perhaps. But they have no credibility, no platform, no following, and no influence. Certainly not enough influence to be referenced in a multimillion-dollar Nike commercial during the Oscars.

So what is this really about? It’s about feminists throwing men into a trunk labeled sexist in order to reinforce their status as a victim. Why? Because when you’re the victim, you get to call the shots and dictate the narrative. In this day and age, policy, procedure, culture, arts, media, and entertainment are all downstream from the one who cries, “I’m a victim!” The victim wears the crown. The oppressed have the say-so. And anyone who questions the legitimacy of the victimhood based on evidence is indeed the oppressor by default.

Am I against celebrating women? Of course not. I have a beautiful daughter who I pray surpasses me in every arena of life. However, I am very much against pointing out nameless, faceless, phantom enemies in order to stay in a stagnant state of self-made oppression. If you’re truly oppressed, I’ll be your biggest advocate. If you’re living better and freer than women have ever lived in the history of humanity and crying out that you’re oppressed, I’ll be your biggest critic. Give me the names of the mass groups of influential men who are advocating anti-equality policy (namely in the arena of sports) and I’ll retract my statements and applaud the ad. Until then, to the one who says, “All men are sexist,” I reply, “Your straw man is sexist. Real men are not.”

This kind of ad is what happens when the demand for oppression lacks the supply. So what is the conclusion? Do we do away with the feminist movement as a whole? I think not. I think we relocate the movement to nations where women are actually oppressed. If Nike had a genuine interest in the topic, I’d suggest paying for closed captioning in Arabic and blasting the message of equality in parts of the Middle East where women can be hit by their husbands in public. These ads ought to be pumped into cultures where female genital mutilation is still common practice. Until then, don’t lecture a phantom bigot about your oppression in the world of athletics while you sit on $180 million that you gained from athletics.