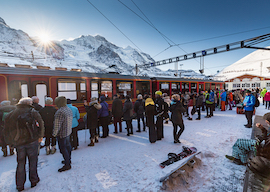 Do any of you know what a cisgender is? I just found out. A cisgender is a term describing someone whose gender identity matches the sex they were assigned at birth. Amazing isn’t it, that we now need a pleonasm for saying someone’s a man or a woman? I sometimes envy my Spectator colleague Jeremy when I read about his conversations with normal people while living inside a French cave. I can no longer converse with anyone who is “with it”—you know the type, the ones who think you’re a Paleolithic hunter-gatherer if you say you’re hungry, what with so many famine victims in Africa.

Last week I decided to meet with some wholesome people—eighteen South Africans, to be exact—who are the Arnold and Penelope Taylor family (we met on the Spectator cruise four years ago), sons and daughters and grandchildren. They were skiing in Wengen, so my driver took me as far as Lauterbrunnen, a village down below from where a train ferries you up to Wengen. No cars, no jet-setters, no expensive jewelry shops, but quaint little Italian and Swiss restaurants and lots and lots of young skiers. I was in a very good mood because the train was full of young American snowboarders and I didn’t once hear the f-word. Once on top, the place looked like the Russian front circa 1942. Swiss army helmets and uniforms have something Teutonic, and the army was out in force preparing the pistes for the great Lauberhorn race this coming weekend. My good mood kept increasing during lunch and with the good red wine. And there was even good news from that great land, South Africa. According to the Taylors, the hope is that a growing middle class will eventually prevail and stop the extremist black nationalists from turning the country into a basket case à la Zimbabwe. It was nice to chat with such wholesome, sporty, and polite young people. None of them knew what a cisgender is. Thank you for a great lunch and even better company, Taylor family.

“I was in a very good mood because the train was full of young American snowboarders and I didn’t once hear the f-word.”

My driver Charlie, who waited for me in Lauterbrunnen, is a terrific chef and a very devoted family man. So I had to make some trouble for him by telling him that the village where he had to spend three hours waiting is not only known for having one hour of sunshine per day in winter—it’s shaded by two mountain peaks—but is also famous for having fourteen brothels, employing only beautiful blond Scandinavian ladies trying to escape the Muslim hordes overrunning their countries. “Not thirteen, not fifteen, but fourteen,” I insisted.

Charlie sort of believed me, but he had his doubts. Fourteen brothels in a tiny alpine village full of blond beauties, however, would tempt the most uxorious of men. So while he was driving me back to glitzy, shitty Gstaad, I rang his wife and told her that although he never entered any of the brothels, all fourteen madams greeted him by his Christian name and seemed awfully happy to see him. She hung up on me. Charlie is a good sport and blames my indiscretions on alcohol, and the altitude, and the surprise of meeting eighteen very normal and extremely nice people in this day and age.

Never mind. The human race always seems to survive, and although it’s going to be hard, it might outlast such things as Meek Mill, Flipp Dinero, Fat Joe, Lil Uzi Vert, Lil Durk, G-Eazy, Dua Lipa, Pusha T, Offset, and others of their ilk. What are these strange names? I took them all off the gossip columns of the New York Post. Apparently they are famous and are written about and make millions saying the f-word into a mike. Once upon a time you read about Winston Guest, and Howard Cushing, and Jock Whitney, and Babe Paley. Now you read about media-empowered charlatans such as the above and also Marshmello and Busta Rhymes. Which means the world is improving. Especially when one hears the theme song of rapper Zi Savage, “F–k N—a Bitches.”

Nil desperandum. There is always the falling dusk and the whispering pines, and the snow has finally arrived just in time as the Gulf types are leaving to go back and beat up their immigrant servants.

The race with my grandson never happened because he had to go back to school in Rome. This week I’m putting on the boots—the worst part of skiing—and will go up the glacier and give it the old college try. Fifty-seven years ago I raced down the Piste Verte in Chamonix during world-championship skiing for Greece. I beat a couple of Lebanese rug salesmen and a Korean sliding down sideways. As I was the last racer to descend, the French minister of sport and conqueror of Annapurna, Maurice Herzog, came over and shook my hand. He had lost his fingers to frostbite. But he had Veronique de Montesquieu next to him, and that’s what pissed me off. She and I had something going, but she preferred a winner like Herzog. I don’t blame her, now.