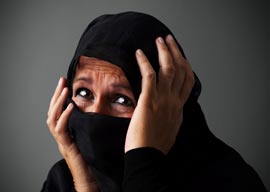 I rarely show much interest in Canadian politics. Truth be told, I think of Canadians as the friendly, quiet neighbors who keep their front lawn neatly manicured and their business to themselves. Not like those other neighbors, the ones who always hop my fence and trample my flower bed. So I reward Canada’s polite neighborliness by not sticking my nose where it doesn”t belong. But with the niqab suddenly playing such a prominent role in the upcoming Canadian general election, I can”t help but feel as though I should butt in.

After all, the first rule of being a good neighbor is not being nosy, but a close second is sharing potentially lifesaving information. As in, “Hey, buddy, your garden’s looking pretty nice today. Whatcha plantin””holy shit is that oleander?”

Speaking from a certain amount of experience as a journalist, I can tell my Canadian friends that no good comes from “niqab sensitivity.” Niqab defenders will dismiss as “paranoid racist fantasy” all scenarios about the bad things that can result from normalizing the niqab and training public officials to be “sensitized” to it. The defenders are wrong; bad things have happened, right here in the U.S.

I”ll give you the best example I can. What’s astonishing about this horrific incident of niqab sensitivity leading to the prolonged rape and torture of a young girl is that it’s a significant detail from a news story that, in all its other details, received probably as much media attention in the U.S. as any crime story of the past thirteen years. Everything was reported wall-to-wall except the “Muslim” angle. This story may be a worst-case scenario about niqab political correctness, but it happened, and Canadian voters deserve to be able to consider it along with all the rosy scenarios the proponents of “diversity” love to put forward.

“At the very least, my Canadian neighbors, however you vote on Oct. 19, reflect for just a moment about Elizabeth Smart.”

Most Americans, and probably a good many Canadians, remember the case of Elizabeth Smart, the beautiful 14-year-old Utah girl abducted from her bedroom in June 2002. The story was huge enough when it was just a missing-persons case, but when Smart was found alive in March 2003, it became a full-on sensation. Revelations that Smart had been subjected to nine months of rape, torture, and brutality at the hands of her kidnapper, self-styled “prophet” Brian David Mitchell (and his female accomplice Wanda Barzee), fed the media firestorm.

In 2010, I covered Mitchell’s trial for the now-defunct Breitbart offshoot YesButHowever.com. One of the most shocking revelations to come out during the trial was that merely two months into her ordeal, Smart was nearly saved by a Good Samaritan in a Salt Lake City library who became suspicious upon seeing a girl in a niqab in the company of an odd-looking bearded man (Mitchell) and an older woman (Barzee). The tipster, who called 911, claimed that the girl’s eyes were remarkably similar to Smart’s (the eyes were the only visible part of the young girl’s covered face). Salt Lake City detective Jon Richey, who arrived to investigate, asked Mitchell if he could look under the girl’s niqab. Mitchell vigorously claimed that to expose the girl’s face to a stranger would violate his religious beliefs. No matter how many times Richey asked to see the girl’s face, Mitchell stood fast, claiming there would be “serious religious consequences” should the girl’s face be exposed to anyone but her husband. Smart, traumatized with fear and with Barzee grasping her tightly, was too petrified to speak up.

Detective Richey admitted on the stand that he was concerned about violating Mitchell’s “civil rights” and offending his “religious beliefs,” so he backed down. He retreated from the library, giving in to Mitchell’s claim that the niqab was sacred and that lifting it would be a gross civil rights violation. Mitchell and Barzee ushered Smart out of the library, and she would be forced to endure seven more months of rape, torture, and physical and mental abuse before being rescued. Smart testified that as Detective Richey abandoned her, “I felt like hope was walking out the door…. I felt terrible that the detective could just walk away.” The detective concluded his testimony by stating, “There’s nothing I would have done differently.” Just think about that sentence for a moment. Even knowing now what his inaction led to, he still stands by what he did. There’s no acknowledgment of error because he doesn”t believe he was in error. Respecting the “sanctity” of the niqab seems more important to him than protecting a 14-year-old girl from rape and torture.

The media did, to an extent, report Detective Richey’s testimony. But here are the things that never made it to the national press. In July 2002, one month before Detective Richey encountered Mitchell and Smart, a state law called HB 101 went into effect. The law, rammed through by Utah Democrats (specifically Rep. Duane Bordeaux, at the time Utah’s only black state legislator), created a master database of the race and ethnicity of every Utah law enforcement officer, and the race and ethnicity of every person he or she stopped in the course of an investigation. Officers would be monitored to ensure that they were not acting in a “racist” or “insensitive” manner when conducting “discretionary stops” (i.e., stops in which the officer has the option to walk away).