Nixon and Kennedy: The Myths and Reality 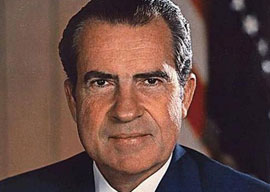 Had there been no Dallas, there would have been no Camelot.

There would have been no John F. Kennedy as brilliant statesman cut off in his prime, had it not been for those riveting days from Dealey Plaza to Arlington and the lighting of the Eternal Flame.

Along with the unsleeping labors of an idolatrous press and the propagandists who control America’s popular culture, those four days created and sustained the Kennedy Myth.

But, over 50 years, the effect has begun to wear off.

The New York Times reports that in the ranking of presidents, Kennedy has fallen further and faster than any. Ronald Reagan has replaced him as No. 1, and JFK is a fading fourth.

Kennedy is increasingly perceived today as he was 50 years ago, before word came that shots had been fired in Dallas.

“The mythologizing of JFK and demonization of Nixon tell us less about respective accomplishments than the moral character of an establishment, which, though it had lost America by ‘72, still controlled the culture, media, bureaucracy and Congress.”

That he was popular, inspirational, charismatic, no one denied. But no one would then have called him great or near great. His report card had too many C’s, F’s and Incompletes.

His great legislative victory had been the passage of the Trade Expansion Act of 1962. His tax cut bill was buried on the Hill.

And after the missile crisis, Bobby Kennedy pushed the CIA to eliminate Castro, eliciting a warning from Fidel that two could play this game. Lyndon Johnson said that under the Kennedys, the CIA had been running “a damned Murder Inc. in the Caribbean.”

What caused Nikita Khrushchev to think he could get away with putting rockets in Cuba? His perception that JFK was a weak president.

Kennedy had denied air cover for the Cuban patriots at the Bay of Pigs, resulting in the worst debacle of the Cold War. He was then berated and humiliated by Khrushchev at the Vienna Summit in June 1961.

In September, Khrushchev smashed the three-year-old nuclear test-ban moratorium with a series of explosions featuring, at Novaya Zemlya, a 57-megaton “Tsar Bomba,” the largest man-made blast ever.

In Southeast Asia, JFK had Averell Harriman negotiate a treaty for neutralizing Laos, resulting in Hanoi’s virtual annexation of the Ho Chi Minh trail through Laos into South Vietnam.

Where Eisenhower had 600 advisers in Vietnam, JFK increased it to 16,000 and gave his blessing to a generals’ coup in which our ally, President Ngo Dinh Diem, was assassinated.