Nixon and Trump, Then and Now 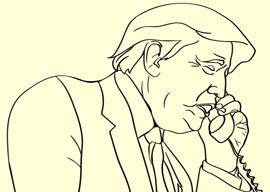 For two years, this writer has been consumed by two subjects.

First, the presidency of Richard Nixon, in whose White House I served from its first day to its last, covered in my new book, “Nixon’s White House Wars: The Battles That Made and Broke a President and Divided America Forever.”

The second has been the astonishing campaign of Donald Trump and his first 100-plus days as president.

In many ways, the two men could not have been more different.

Trump is a showman, a performer, a real estate deal-maker, born to wealth, who revels in the material blessings his success has brought. Nixon, born to poverty, was studious, reserved, steeped in history, consumed with politics and policy, and among the most prepared men ever to assume the presidency.

Yet the “mess” Trump inherited bears striking similarities to Nixon’s world in 1969.

Both took office in a nation deeply divided.

Nixon was elected in a year marked by the assassinations of Martin Luther King Jr. and Robert Kennedy, race riots in 100 cities, and street battles between cops and radicals at the Democratic National Convention in Chicago.

By the fall of 1969, Nixon had buses surrounding his White House and U.S. Airborne troops in the basement of his Executive Office Building.

Trump’s campaign and presidency have also been marked by huge and hostile demonstrations.

“The U.S. establishment, no stranger to the big lie, could not and cannot accept that the nation preferred these outsiders.”

Both men had their elections challenged by the toxic charge that they colluded with foreign powers to influence the outcome.

Nixon’s aides were accused of conspiring with Saigon to torpedo Lyndon Johnson’s Paris peace talks. Trump aides were charged with collusion with Vladimir Putin’s Russia to disseminate stolen emails of the Democratic National Committee. The U.S. establishment, no stranger to the big lie, could not and cannot accept that the nation preferred these outsiders.

Nixon took office with 525,000 troops tied down in Vietnam. Trump inherited Afghanistan, the longest war in U.S. history, and wars in Iraq, Syria, Libya and Yemen.

Nixon pledged to end the Vietnam War with honor and begin an era of negotiations—and did. Trump promised to keep us out of new Mideast wars and to reach an accommodation with Russia.

Nixon and Trump both committed to remake the Supreme Court. Having pledged to select a Southerner, Nixon saw two of them, Judges Clement Haynsworth and Harrold Carswell, savaged by the Senate.

While Nixon was the first president since Zachary Taylor to take office without his party’s having won either house of Congress, Trump took office with his party in control of both. Thus, Trump’s nominee, Judge Neil Gorsuch, made it.

Probably no two presidents have ever faced such hostility and hatred from the media. After his 1969 “Silent Majority” speech on Vietnam was trashed, Nixon declared war, authorizing an attack on the three networks by Vice President Spiro Agnew.

Trump has not stopped bashing the media since he came down the escalator at Trump Tower to declare his candidacy.

In Trump’s first major victory on Capitol Hill, the House voted narrowly to “repeal and replace” Obamacare. Only with a tiebreaking vote by Agnew in August 1969 did Nixon win his first big victory—Senate approval of a strategic missile defense.

Though Nixon had backed every civil rights law of the 1950s and ‘60s, he was charged with pursuing a racist “Southern strategy” to capture the South from Dixiecrats, whose ilk had ruled it for a century.

Trump was also slandered for running a “racist” campaign.