No, I’m Not Eating That Goddamned Insect 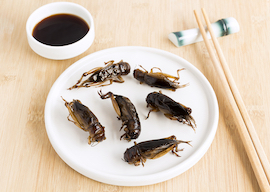 Permit me to confess that I’m not exactly a fan of our friends in the insect kingdom. Regarding one of the most disgusting sights mine eyes have ever seen—that of a rat scurrying across Manhattan’s Washington Square Park with a cockroach in its mouth—my revulsion was rooted in the fact that the noble little rodent would deign to forever degrade himself in this way. It’s not that I’m warmly disposed toward rats or snakes, but there’s something about insects that is so mechanical and hyper-prehistoric—and, dare I say, 100% soulless—that they inspire a rare level of dread in me.

If you’ve ever seen the episode of Rod Serling’s Night Gallery called “The Caterpillar”—in which Laurence Harvey is strapped to a bed in Borneo and endures weeks of searing torture as a female earwig eats its way through his brain—you probably don’t want to be reminded that it ends when a physician tells him the good news is that the earwig came out the other ear, while the bad news is that she laid eggs on his brain.

If you claim that there’s a God, explain why he allows earwigs to exist. Good luck with that theological apologia.
So when I clicked on the ad for Cricket Protein Bars, I foolishly assumed that “Cricket” was a brand name rather than a primary ingredient. When I landed on the site’s home page, I was assailed with a locust swarm of propaganda in a simple and eyeball-popping style I’ll call “Modern UN Globalist,” informing me that not only are the carcasses of crickets who’ve been Holocaust-roasted and ground into powder nutritious and delicious, these insect-addled protein bars will actually SAVE THE EARTH AS WE KNOW IT:

Crickets are a complete protein source, containing all the essential amino acids….Cricket powder also contains over twice as much iron than spinach does.  Plus they’re packed with B12!…Crickets produce 1% of the greenhouse gases that cows produce….80% of the world already feasts on bugs daily….For starters, they produce virtually no methane and require minimal feed, water and space compared to traditional protein sources….Crickets require a tiny fraction of the water that cows do to make the same amount of protein.

And that “80% of the world already feasts on bugs daily” claim is either a dimwitted misreading of an actual statistic or a far more sinister act of purposeful deception—while 80% of the world’s countries practice some kind of primitive, disgusting ritual collective insect-mastication, at the moment bug-eaters account for about two billion out of the seven billion souls on this planet—two billion souls that I don’t think I’m entirely out of line for characterizing as at least partially subhuman.

To my knowledge, I’ve consciously eaten insects twice. First time was in the late 1960s when my brother brought home chocolate-covered bees and ants from Vietnam. They tasted like chocolate with toasted coconut, although I remember spotting a bee wing. The second time was in the late 1980s in LA when I thought it’d be adventurous to purchase some ant larvae from a Thai supermarket and add it to an omelet. I took a couple bites and realized that some of the larvae had matured to the point where they were looking at me. Then I spit it out and tossed my ant-maggot omelet in the waste bin.

Still, all of us already eat bugs daily, whether we like it or not—and if you like it, I am not your friend. The Food and Drug Administration allows there to be up to 400 insect fragments in every two ounces of cinnamon you buy, 30 fragments in every gram of oregano, 75 mites and 20 maggots per 100 grams of mushrooms, one maggot per cup of canned citrus juice, and a whopping 13 insect heads per 100 grams of fig paste.

This is why I make a point of staying away from fig paste. Don’t take it personally if you have me over for dinner and I decline to eat any of your fig paste.

“If there’s a part of the elusive ‘West’ that I truly want to save, it’s the part that doesn’t eat bugs.”

And then you look at the very few places where bug-eating has been adopted publicly in North America and realize that both are clustered in the Pacific Northwest, which tells you everything you need to know about the type of people that are peddling this nonsense full-throttle.

I don’t mind learning about different cultures. If I have to learn how to say, “No, I’m not eating that goddamned insect” in every language spoken at the United Nations, I will do it.

“Entomophagy”—pronounced en-toe-MOFF-uh-gee”—is a fancy way of saying “the practice of eating bugs.” This is Professor Arnold Van Huis. He is reputedly “the world’s leading expert in entomophagy.” I mention him and link to his picture for no other reason beyond the fact that I suspect at this point, his body is primarily composed of insects. What’s worse, the process appears to be irreversible.

We are informed—as if it’s supposed to be a good thing—that people all over the planet practice entomophagy.

When they’re feeling peckish, natives in the Amazonian jungle gobble down a few mouthfuls of leafcutter ants.

In Southern Africa, the local yokels routinely munch on the barbed and squirmy mopane worm.

In Northeastern India, hungry dotheads are prone to lazily feasting on a pest known as Udonga montana.

In Australia, the aborigines—which, I think we all agree, are the ugliest people on the planet by far—stave off starvation by popping a few witchetty grubs—a breed of large white wood-eating larvae—on the barbie.

Mexicans are keen on chewing the dead toasted flesh of giant yellow grasshoppers they call chapulines.

In East Java they’ll season a larvae-oozing beehive with spices and shredded coconut, wrap it inside a banana leaf, steam it, and chow down like it ain’t no thang. I wouldn’t be surprised if they all laughed at each other’s arthropod-fueled flatulence afterward, either. I can see that. East Javans have no filter.

In sub-Saharan Africa, they are said to be extremely fond of shoving fistfuls of termites in their malnourished maws.

But here in the American South, I would rather shoot you point-blank between the eyeballs than even think of eating a fried grasshopper.

Notice how none of those bug-eating countries is located in what we consider to be “the West”? Well, “the West” is getting blamed for having deeply ingrained cultural prejudices against bug-eating that is preventing the spread of entomophagy as well as the presumed demographic invasion of peoples from bug-eating climes.

The global Powers That Be are apparently pushing entomophagy as a way to integrate the world under their solitary jurisdiction, white and black and red and yellow all squashed together in the same worldwide underclass, humbly eating cucarachas in a world with no borders while the elites huddle in their castles feasting on antelope tartare.

Last week, The New York Times instructed us “How to Develop an Appetite for Insects.”

According to a 200-page report issued by the United Nations in 2013, this irrational Western phobia against insects is a “bias,” which is a word I’m assuming they chose because even the UN is aware how ridiculous it sounds to say that hating insects is a form of racism:

Westerners should become aware of the fact that their bias against insects as food has an adverse impact, resulting in a gradual reduction in the use of insects without replacement of lost nutrition and other benefits.

I would rather eat human flesh than insects. After all, it’s what my people do.

Despite the global chants of “Westerners should start eating bugs to save the planet,” we don’t hear much along the lines of, “Well, maybe Africans shouldn’t be having so many babies, and we wouldn’t even be having this ridiculous discussion, now please pass me a napkin.”

So the choice is clear—we all start eating bugs, or we curb Third World population growth in the most humane yet effective way possible.

How many human lives need to be stopped—before they even get a chance to start, so I’m not talking about murder but rather preemptive murder in the form of economic sanctions and general indifference—to ensure that we have sufficient supplies of beef, pork, and poultry? Are you willing to swap out a potential three billion more people—many of whom may have been trained since birth to be hostile toward you—for easy access to cheeseburgers?

I am, and I don’t even like cheeseburgers that much.

If it’s a stark choice between Big Meat and Big Bug, sign me up for Team Meat.

Let’s divide the world into two camps—those who eat insects and those who are evolved enough to realize it’s gross—and let’s go to war.

I will not go to war over ideology, religion, or even my “group,” however you wish to define that group beyond myself and a handful of loved ones. But I may have to go full nuclear if you try shoving even one bug in my mouth. If there’s a part of the elusive “West” that I truly want to save, it’s the part that doesn’t eat bugs.