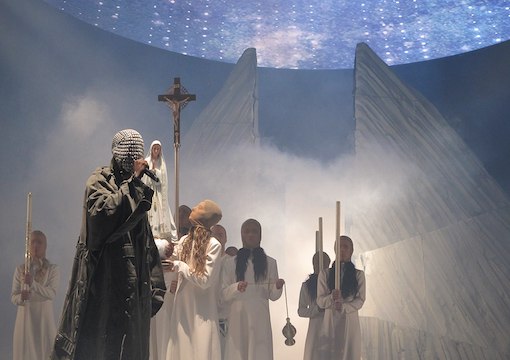 “I like Hitler,” said Kanye West (now Ye) to approximately 15 million people on Alex Jones’ Info Wars last week. Jones tried to defuse the situation by clarifying Ye’s point and assuming it was a gesture to all people—good and bad—because they are all God’s children. Ye shook his head. Jones added that he’s sick of being called a Nazi because he’s not. Ye put up his hand and said, “I’m a Nazi.”

We were watching it from my studio in the South Bronx and every time Ye dug his heels in, my producer and I stared at each other in disbelief. This was the most entertaining television since the Sex Pistols called Bill Grundy a “fucking rotter.” We had never seen anything like it.

Ye’s outrageous behavior in recent weeks has cost him $600 million in sponsorships, partnerships, pending deals, and contracts. The remaining $400 million has been frozen by his bank. Hours before we arrived, Ye had received a text from his new fiancée that said, “I can’t do this anymore.” Though it was never said, my understanding is it has also cost him access to his kids. He had lost everything, but I got the feeling it was missing his kids that was really crushing him. If you want to destroy a man, give him everything he wants. If you really want to destroy a man, take away his family. Ye was experiencing both at the same time and it gave him an almost suicidal “fuck it” attitude.

“One of the upsides of being in the canceled community is that when others fall into the Star Wars trash compactor with you, you get to talk to them.”

One of the upsides of being in the canceled community is that when others fall into the Star Wars trash compactor with you, you get to talk to them. I know everyone associated with Ye’s presidential campaign, including ex-gay Milo Yiannopoulos, “Stop the Steal” organizer Ali Alexander, and alt-right enfant terrible Nick Fuentes. Funny enough, Nick called in to my show from his high school six years ago to ask what I thought of this Kanye guy. I said I hoped his new album lived up to the hype. It did.

So, it wasn’t difficult getting an okay to talk to Ye about his foray into the most taboo subject in America next to pedophilia: anti-Semitism. Though I’ve met a few sane intellectuals who are angered by the disproportional influence Jews have on banks, the media, academia, politics, and Hollywood, I see that train of thought as a rut. George Soros is a second-generation atheist; so is the head of The New York Times. My beef is with the elites and, yes, Jews are overrepresented in that group, but it’s because they tend to have high IQs. They’re overrepresented in medicine, chess, and math, too. I do recognize there is a kind of anti-Western ethnomasochism among the aforementioned departments, but you see it in elite goys just as strongly. Scotland has zero Jews and is the most woke country in Europe. Germany was self-hating way before Christianity. The pagans sacrificed babies the same way Planned Parenthood does today. “Don’t be stingy with your hate, Ye,” I planned to say, “there’s plenty to go around.” I also wanted to showcase the conservative Jews who resent the secular Bolsheviks as much as Ye does. What about astute right-wing lawyers such as Jon Gross, who’s helping me sue the town of Rutherford, N.J., for canceling my comedy show, and Ron Coleman, who’s helping me sue the SPLC? What about Ezra Levant and Dennis Prager and Lee Zeldin and Michael Savage and David Horowitz and Jonah Goldberg and Ben Shapiro and Libs of TikTok? I’m from Montreal, upstate New York, and Williamsburg, Brooklyn. I’ve been ensconced in Orthodox and Hasidic Jews my entire adult life. They’re cool.

After hearing Ye would do it, we took a taxi straight to the airport and got on the next flight to L.A. The following morning he agreed to meet at his warehouse, where infinite racks of clothing and shoes fill 5,000 square feet of prime real estate. Nick introduced me to Ye, who, despite being 5′ 8″, was wearing gigantic rubber boots that made him six feet tall. “Wow,” I was going to say, “you’re way taller than I thought you were.” I didn’t say that. I was nervous. I shook his hand and said, “Cool,” which made us both feel uncomfortable. Ye stared at his phone while I helped my tech guy set everything up. After seeing him walk out on Tim Pool after only a few minutes, I was determined to make everything go as smoothly as possible. Eventually, I made my way back over to him to try to establish a connection. I knew Ye had quit porn and I knew that would be a good subject to break the ice. Cool people and blacks and cool black people tend to think I’m a square because I wear suits, so a great icebreaker is to talk about sex in a vulgar way that shows I’m one of the guys. I think this is what Trump was doing with his “grab the pussy” comments. It’s a guy thing. You wouldn’t understand. “Porn is fucking gross,” I said. “It’s a bunch of strangers pulling on their dicks and staring at a meth head who can cut off her feelings during sex because she had to as a kid when she was getting raped by her uncle.” I also said quitting porn is great for marriage because, “and this is going to sound bad,” I warned, “it makes you rape your wife.” Ye laughed because he knew what I meant. Again, it’s a guy thing.

Boom, we were off to the races. Ye demanded he set up the shots. “I’m the greatest creative director in the room,” he insisted. I prefer the generic 60 Minutes setup, but Ye wanted an interrogation-room feel that included very tight one-shots of me, Nick, and himself. Unfortunately, Ye had taken a random paparazzi under his wing (most L.A. paps are poor blacks willing to get arrested or assaulted) who was completely incompetent as a director of photography. Despite the jarring shots, the interview went surprisingly well. I originally titled the video Saving Ye and it was meant to be ironic because (a) he hates that concept, and (b) what kind of arrogant moron thinks he’s going to show up and completely reverse the thinking of the third-most-famous person in the world (after Trump and Jesus)? I wasn’t there to change his mind. I was there to pitch an idea. He’s right about some stuff, but how about an alternative angle for the other stuff? That’s a much more endearing way to approach a disagreement—with options.

I did my pitch about Jews being overrepresented in high-paying fields like Hollywood and media, but I included law and science. Nick and Ye didn’t want to hear it. It’s not anti-Semitic to notice Jewish overrepresentation. The problem is when you ascribe some kind of Machiavellian plan for the destruction of America. I decided to take The Bell Curve’s angle where they say it’s okay to notice patterns; you just can’t apply them to the individual. “Blacks are overrepresented in violent crime,” I said, hoping to gain some racial empathy, “but when you see a black person, you start with a clean slate. Is that the way you are with Jews?” Ye rejected my analogy immediately with a flippant “Nope.” Coming from inside a Balenciaga mask it was such an unforgiving stance, we all burst out laughing. “This intervention isn’t going very well,” I added as we laughed some more. This moment went viral, and so it should. It’s funny. We can disagree. We can bounce ideas off of each other. What kind of pussy is scared of someone else’s thoughts? He’s not legislating anything. He’s not a threat. By censoring Ye and debanking him you are making a helluva case for anti-Semitism.

After the interview, we hung out for about an hour. We talked about the Holocaust and WWII. It became clear Ye didn’t have strong opinions about Jews or Hitler. He didn’t care. “I don’t care about myself,” he said. “You think I give a shit about Jews?” I got the feeling he was so devastated by the lack of access to his kids, he didn’t really care whether he lives or dies. He’s like the WWI soldiers in All Quiet on the Western Front. The “fight or flight” gene has been replaced with “do your worst.” Ye reminded me of early-aughts NYC with artists such as Dash Snow and Terry Richardson who enjoyed offending people and didn’t care how they were perceived. I don’t believe Ye’s words have led to more anti-Semitism. I think the Jewish reaction to his words have. He said Jews control the banks and the media. He was immediately pilloried by the media for this and the banks froze his accounts. If you want to show the world someone’s wrong about you, maybe don’t do exactly what they’re accusing you of doing.