No Brain, No Vote! 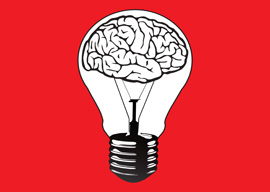 A recent article in The Huffington Post, that eternal blast of lavender-scented, dreamcatcher-filtered wind from the left, recently suggested that America needs a Voter IQ Law.

Apparently a flaccid stab at Swiftian satire, the article was in response to recent laws requiring basic ID for voters to cast ballots in November’s election. The article’s author, Daniel Treadway, who looks as geekily beta as you’d expect from a progressive male scribe, implied that voter ID laws are designed to disenfranchise blacks and “lower-income voters.” (Although it’s helmed by a woman whose net worth is estimated at anywhere from $35 million to over $100 million, HuffPo postures itself as a staunch defender of society’s poor and marginalized members. I can only speculate about the reasons for this, but my best guess would be “wealth guilt.”)

Prog Munchkins across the land rejoiced at the suggestion, saying such a law “will only affect conservatives” and eliminate “low info red staters,” with the end result being that the “GOP would cease to exist.” Special venom was aimed toward Tea Party members, AKA “teatards,” whom progs are fond of depicting as mentally challenged even though a New York Times poll found them to be more wealthy and educated than average Americans.

“Presumption of intellectual superiority is tattooed on the modern progressive brain.”

Are these leftists right? Are these devotees of political correctness correct? Are most of them even aware that their cherished Voting Rights Act of 1965 is what initially did away with literacy requirements for voters?

Presumption of intellectual superiority is tattooed on the modern progressive brain. With smug triumphalism, they trot out studies that attempt to prove that conservatism is caused by “Low-Effort Thought” and “Low IQ.” They will even get all eugenic on your ass by suggesting that leftists are smarter due to evolutionary advantages. Because it doesn’t follow the script, they tend to ignore studies that show that Republicans tend to be far more informed than Democrats on political issues and that Republican males have perennially been shown as more likely to have college degrees than Democratic males.

This may be due to what I’ll call the “Barbell Effect””there are indeed many leftists of high intelligence and erudition, but they’re counterbalanced by a surfeit of borderline-retarded constituents mainly aggregated in inner cities whose intellectual aptitude would make your average “teatard” look like a Rhodes Scholar. For every reputed teabagger you see hoisting a misspelled picket sign, I can point to some no-information imbecile who thinks Obama dispenses welfare out of his “stash” or who voted for him even though they were clueless about his policies.

And although it’s true that wealthier people tend to vote Republican, in the 2008 presidential election voters making over $200,000 a year”in other words, the meat ‘n’ potatoes of the oft-scorned “1%”“favored Obama over McCain. Modern proglosauruses probably also avoid pondering the fact that IQ and income tend to be correlated, meaning that a Voter IQ Law would squeeze out many of the selfsame “low-income voters” whose interests they’re always white-knighting.

Leftists are eternally eager to mention IQ except when it applies to their vaunted “oppressed minorities,” and then suddenly things such as race and IQ cease to exist, and you’re a bad, bad, evil witch for even suggesting that they do. But they force the issue by their incessant bashing of “dumb rednecks” and their childish refusal to acknowledge the existence of “dumb coons” and “dumb wetbacks.”