No Burritos For You! 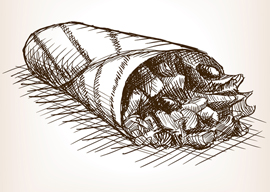 I”m not a fan of Mexican food, for reasons which should be obvious. Although I hold Mexicans in the highest esteem as a proud and noble (if exceedingly short) people, they tend to score poorly on standardized tests and have never invented much of note beyond nachos. I can”t think of a single Mexican comedian, musician, writer, or filmmaker who’s inspired me. To put it bluntly, I”ve never appropriated anything from them because I”ve never wanted to.

Portland, OR is one of the best American cities to enjoy from a distance. After all, it hosted what is easily one of my Top Three Favorite Hate-Crime Hoaxes of all time in the person of one Azalea Cooley, an allegedly cancer-stricken, wheelchair-bound black lesbian who wound up being the person who, when all was said and done, turned out to be the Mystery Klansman who was burning crosses in her own backyard.

Now comes word that a pair of white female Portlanders have shut down their pop-up burrito cart after they were publicly tried, convicted, and hanged for the sin of cultural appropriation.

“Portland, OR is one of the best American cities to enjoy from a distance.”

For a few months, Kooks Burritos shared a space with a taco truck in a parking lot somewhere in the self-accusingly white city of Portland. Its proprietors were Liz Connelly and Kali Wilgus, the latter of whose parents are undeniably guilty of culturally appropriating the name of a Hindu goddess of destruction”unless Ms. Wilgus called herself that, which makes her the guilty one.

Kooks Burritos was successful until a fateful May 16 interview with free local newspaper Willamette Week, which quoted Liz Connelly publicly”and without any apparent shame or remorse”confessing that she had been inspired to open her own burrito cart after a trip to Mexico:

I picked the brains of every tortilla lady there in the worst broken Spanish ever, and they showed me a little of what they did. They told us the basic ingredients, and we saw them moving and stretching the dough similar to how pizza makers do before rolling it out with rolling pins. They wouldn’t tell us too much about technique, but we were peeking into the windows of every kitchen, totally fascinated by how easy they made it look. We learned quickly it isn’t quite that easy.

I”m no mind-reader, but the vibes I catch rolling off of Connelly here seem to be self-effacing and deeply worshipful of Mexican culture. But since this is Portland, and since Portland is insane, this apparently well-meaning white woman was tossed into the furnace and subjected to a bout of public shaming that may force her to go on painkillers and collect cats for the rest of her life.

Writing in the competing free weekly The Portland Mercury, an adipose black woman who calls herself Jagger Blaec“and who may, in fact, have stolen the English-derived surname of The Rolling Stones” singer and appropriated it as her first name”subjected Willamette Week, the two burrito-vending white girls, and even the entire City of Portland to a furious bout of her disapproval:

Portland has an appropriation problem. This week in white nonsense, two white women”Kali Wilgus and Liz “LC” Connely”decided it would be cute to open a food truck….the owners of Kooks Burritos all but admitted in an interview with Willamette Week that they colonized this style of food….This is where things go from quirky to predatory….These two white women went to Mexico, ate tacos, and then decided they would just take what the locals clearly didn’t want to give them…the recipes were stolen….Because of Portland’s underlying racism, the people who rightly own these traditions and cultures that exist are already treated poorly.

As the inane “controversy” began to ripple out of Portland across America and even into England, the inanity only intensified. An absurdly reflective article in the Washington Post wondered, “Should white chefs sell burritos?“:

Portland, Ore., has become the epicenter in a growing movement to call out white people who profit off the culinary ideas and dishes swiped from other cultures.