No Child Allowed Ahead 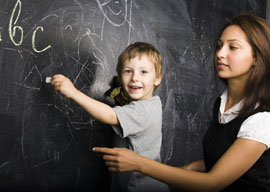 In my last column I fulminated about the calamitous effects of the feminization of the schools, of turning the school into an emotional infantile crÃ¨che aimed at the fundamentally female goals of psychological conditioning, conformity, and totalitarian niceness. A lot of mail arrived, pro and con. Since schooling is of importance to the US, perhaps it is worth examining.

Predictably, I was accused of hating women. Actually it is not women that I find objectionable, but American women, who are a small part of the world’s women.

My saying “American women” is of course a wild generalization subject to degrees, exceptions, and qualifications. A more sober statement would be something like this: There are enough American women overtly hostile to men, enough snarling feminists teaching semiliterate misandry in academic departments of sexism (Women’s Studies), enough little boys being drugged at female recommendation, enough repression of normal behavior of small boys by female teachers, enough bias against men in divorce courts, enough depiction of men as fools and knaves by females in the media, that it seems to me wise to avoid the species. I mean none of this to apply to women to whom it does not apply.

“People of low voltage do not naturally have much interest in academics. They easily become prey to a pedagogy focusing on “interpersonal relations.””

If I were the only one who thought the foregoing, I would dismiss myself as a crank expat living in Mexico. Among American men however there is a great deal of agreement if my personal experience, countless websites, and a lot of email are any indication. It matters, methinks, that so much very real ill will exists between so many men and women.

Further, my objection was not to female teachers per se, but to the current crop of feminists who don”t like boys, or understand them, or want to, and are ruining them. All of my teachers in grade school, and perhaps half in high school, were women. They were fine. The reason was that they accepted the masculine view that schools existed to teach content. They did: first arithmetic and then math, and history, English grammar and composition, literature, Latin, and so on. Bless them.

What I dislike is the feminized, therapeutic view of schools as places not to teach anything but to engage in Pavlovian conditioning of kids to female norms of syrupy goodness, nonviolence (tag, dodge ball, and wrestling) docility, conformity, and warm interpersonal glop. Learning anything gets short shrift.

An examination of teachers” intellectual qualifications, such as rankings against those in other fields on the Graduate Record Exams, will show them to be at the bottom. These are averages, of course, and there are exceptions. Still, people of low voltage do not naturally have much interest in academics. They easily become prey to a pedagogy focusing on “interpersonal relations.”

The effects show. Maybe fifteen years ago I went into a middle school in mostly white, moderately upscale Arlington, Virginia, and found on the wall a student’s project celebrating the contributions of Italians to science”specifically those of Enrico Fermi to, so help me, “nucler physicts.” On the wall. Without correction. I have seen other examples.

These malfeasances spring from favoring self-esteem (when I am dictator I will have anyone who uses that term hanged) over knowledge. It is not a masculine approach. Nor will it produce the thoughtful, intellectually competent citizenry the country desperately needs.

In a Marine Corps dayroom I once saw a coffee mug inscribed, “To err is human, to forgive divine. Neither of which is Marine Corps policy.” (Why did that come to mind, I wonder?)