No Child Killer Left Behind 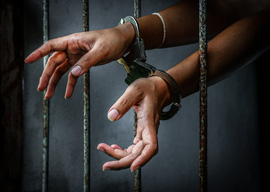 A moral crusade at The New York Times typically begins with an in-depth, above-the-fold front-page story, followed days later by an editorial-page sermon. And so it goes with the story of one Michelle Jones, a black woman recently freed from prison after serving twenty years and just inducted into NYU’s doctoral program in American studies only after suffering—in the Times’ opinion—a great injustice at the hands of a renowned Ivy League institution.

Much to the liberals’ chagrin—and all within a single 24-hour time span—the pooh-bahs at Harvard not only rejected a felonious transgendered traitor who leaked hundreds of thousands of secret military records and endangered many lives, but also turned down Ms. Jones—despite the admissions recommendation of the history department—“out of concern that her background would cause a backlash among rejected applicants, conservative news outlets or parents of students.”

Her background? In 1992 she beat and starved her 4-year-old son to death; his body has never been found. She was sentenced to fifty years in prison and freed thirty years early for good behavior and a record of academic achievement.

“Such are the depths to which the race-relations debate has descended.”

However, despite her crime and her very early release from the penitentiary, the Times posits that Ms. Jones is the injured party in this saga, while holding Harvard administrators—and society in general—as the villains. For she is portrayed as the victim of a national obsession with “mass incarceration,” which functions as a guarantor of white supremacy by imprisoning black Americans in disproportionate numbers and reducing them to lifelong second-class citizenship status upon release.

Yet as much sympathy as the Times demonstrates for the hopes and dreams of the newly freed Ph.D. candidate, it correspondingly neglects to offer even the smallest amount of consideration for the real victim in this sordid tale: the murdered child who will never have a chance to apply to college. Now dead for 25 years, the unfortunate boy doesn’t seem to have a name. Either that or the Times saw no need to humanize him by providing the reader with such superfluous information.

Also vitally relevant, but completely absent from the Times story, is any indication of remorse on the part of Ms. Jones, or any plausible explanation of why she refuses to provide the location of the dead boy’s body, or why she was released from prison despite this. It’s hard not to conclude that her reluctance to do so can best be explained by the fear that an examination of the corpse would reveal just how severely the child was brutalized.

Nevertheless, these troubling unanswered questions seemed not to bother The New York Times or various members of the history and American-studies departments at Harvard, who were so enthusiastic to have a seemingly unrepentant child-murderer join their staff that they “took it upon themselves to type Ms. Jones’s application into Harvard’s online system since she could not.”

In the aforementioned editorial titled “A Prison Sentence Ends. But the Stigma Doesn’t,” James Forman Jr., a Yale professor and the author of Locking Up Our Own: Crime and Punishment in Black America, takes issue with Harvard’s decision to reject Ms. Jones and also seems to imply that even the twenty years she served for murdering her son was overly harsh and excessive: “After 50 years of prison building, more and more Americans are expressing doubts about the harsh policies that have made this country the world’s largest jailer.”

Making no distinction between violent and nonviolent crime, Forman goes on to sermonize:

People convicted of crimes often become social outcasts for life, finding it difficult or impossible to rent an apartment, get a job, adopt children, access public benefits, serve on juries or vote…. Mass incarceration and its never-ending human toll will be with us until we come to see that no crime justifies permanent civic death. N.Y.U.’s acceptance of Michelle Jones is an example of an institution leading the way toward a more forgiving nation. Harvard’s rejection of her shows just how far we still have to go.