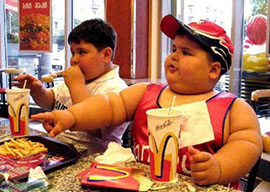 Take Michelle Obama anti-obesity thing that she is on. She is on this kick, right. What she is telling us is she cannot trust parents to make decisions for their own children, for their own families in what we should eat.

Earlier in November, before flipping a middle finger to the “anti-obesity thing” in the form of a tray of cookies she carted into a Pennsylvania school fundraiser, Palin had Tweeted:

Critics have noted that in her 2009 “State of the State of Alaska” speech, Palin said that “government policy can help” in the war against corpulent chilluns. Since she didn”t elaborate in her speech, it remains unclear how Palin’s plan would have differed from Obama’s.

Predictably, the MSM entities who rejoice in trashing Palin”in other words, roughly 98.6% percent of them”dogpiled atop her yet again for her recent comments. They phrased Ms. Obama’s program in such stirringly sweet terms, you”d have to be a fucking asshole to be against it. Who wants the kids to starve? I know I don’t want the kids to starve. What kind of monster would want the kids to starve, especially children of color, who are disproportionately harmed by “food insecurity” and obesity? Why, they”re taking away these kids” natural-born right to free cherry tomatoes, all in the name of HATE. “Sarah Palin Wants Government to Help Make Your Kids Fat,” lied a Huffington Post author who, if he was honest, would admit he truly has no idea what Sarah Palin wants.

CNN’s Roland Martin, a roly-poly man who’s made a career of complaining about being black in a country where it’s better being black than nearly anywhere on the planet, called Palin “stupid” and suggested that “someone should kick” her for pooh-poohing childhood obesity’s ravages on our nation’s youth. Looking at pictures of Martin, he apparently assumes portliness is A-OK if you”re an adult.

Michelle Obama has exposed herself over and over again as a gal with a deep-seated hatred of fat kids. Halting and eventually eliminating childhood obesity has become her fundamental project as First Lady. She’s going to shave pounds off those fat little bastards whether they like it or not. To stress the importance of exercise, she has demonstrated how to use a hula hoop on the White House lawn. She has appeared at a Florida school clad “in a chic tangerine pantsuit and matching patent leather flats” to tout her plan of bringing 6,000 salad bars to American schools over the next three years. She’s let us know that she hates beets and performs the occasional dietary cleanse, which marks the first time I”ve ever been forced to think about a First Lady’s feces. And I thought it was cool of her”benevolent, really”to recently tell Americans via Barbara Walters that it would be OK for us to eat pie for Thanksgiving. (And I say this without any knowledge of whether or not she’s receiving bribes from the Big Pie lobby.)

But she apparently smells not a whiff of hypocrisy in the fact that in 2005-2006, she banked nearly a quarter-mil in salaries and stock options by sitting on the corporate board of directors of TreeHouse Foods, Inc., a mega-corporation that churns out such Edenic foodstuffs as cheese sauces, puddings, powdered soft drinks, and Keebler cookies.

In politics as well as life, it’s always wise to ask “Cui bono?”“Latin for “To whose benefit?””whenever anyone launches into a sanctimonious campaign ostensibly to help mankind.

“Michelle Obama has exposed herself over and over again as a gal with a deep-seated hatred of fat kids.”

So whose palms are getting greased with human lipids in this situation? As far as I can tell, underneath all the hula-hooping and cookie trays, this is fundamentally a clash between Big Business and Big Government. A subplot involves a conflict between Big Beef and Big Lettuce. But don”t be fooled”the loudest voices on both sides of this debate have something to gain financially if they win.

Harry Truman signed the original National School Lunch Act into law in 1946, reminding us that “A nation is only as healthy as its children.” What he neglected to remind us was that the bill was fundamentally “a way to prop up food prices by absorbing farm surpluses.” Since then, the feds have plunged themselves almost inextricably deep into the food biz, to the point where they sink tens of billions annually into agricultural subsidies.