No Chimp Left Behind 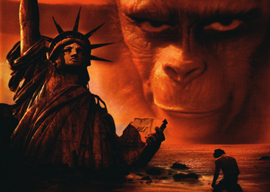 Summer blockbuster movies often allow the popular imagination to engage metaphorically with topics that aren’t discussed honestly on the editorial page—topics such as IQ, race, and heredity. (Personally, I don’t think it ought to be necessary to spend tens of millions on computer-generated imagery merely to get a few things off your chest, but I realize that’s a minority view.)

As Eric Greene noted in his 1998 book Planet of the Apes as American Myth, these films “were the most fun you could have thinking about movies.” The 1968 original, with Charlton Heston as, in effect, an angry black radical protesting the oppression of his (human) race, was more conceptual fun than a barrel of metaphorical monkeys. Besides the obvious notion of apes as The Man, the original Planet schema offers a “second, more complex allegory, which codes white gentile humans as orangutans, white Jews as chimpanzees, and African-Americans as gorillas,” as Greene explained.

“In contrast to liberal 20th-century beliefs, Rise of the Planet of the Apes assumes that apes are held back by genetically low IQs.”

Unfortunately, the bombastic original is—excepting Rod Serling’s justly famous ending with the Statue of Liberty near Zuma Beach—more compelling to recall than to re-watch. In turn, the next four movies, which made the Black Power themes even more prominent, came from an era in which sequels had smaller budgets than originals. Still, these cheesy flicks were thought-provoking for Baby Boomer adolescents.

The 1968 Planet is a product of the Rousseauan era of primate research, in which chimps were viewed as smelly but pacifist hippies and thus could be portrayed as liberal intellectuals persecuted by reactionary orangutans. In the 1970s, Jane Goodall finally started to notice the Hobbesian side of her troop at Gombe, who would wage war and castrate their victims.

Jaffa and Silver dismissed Ronald Reagan’s assertion in Bedtime for Bonzo that “environment is all important” and “heredity counts for very little.” In contrast to liberal 20th-century beliefs, Rise of the Planet of the Apes assumes that apes are held back by genetically low IQs. (Sure, that’s part of why chimpanzee culture is so atrocious, but they’re also impulsive and selfish. They don’t see much reason to teach any discoveries they make to their fellow apes. Hey, they’re chimps, not chumps.)